Tame your relatives and make that precious chaos last forever. 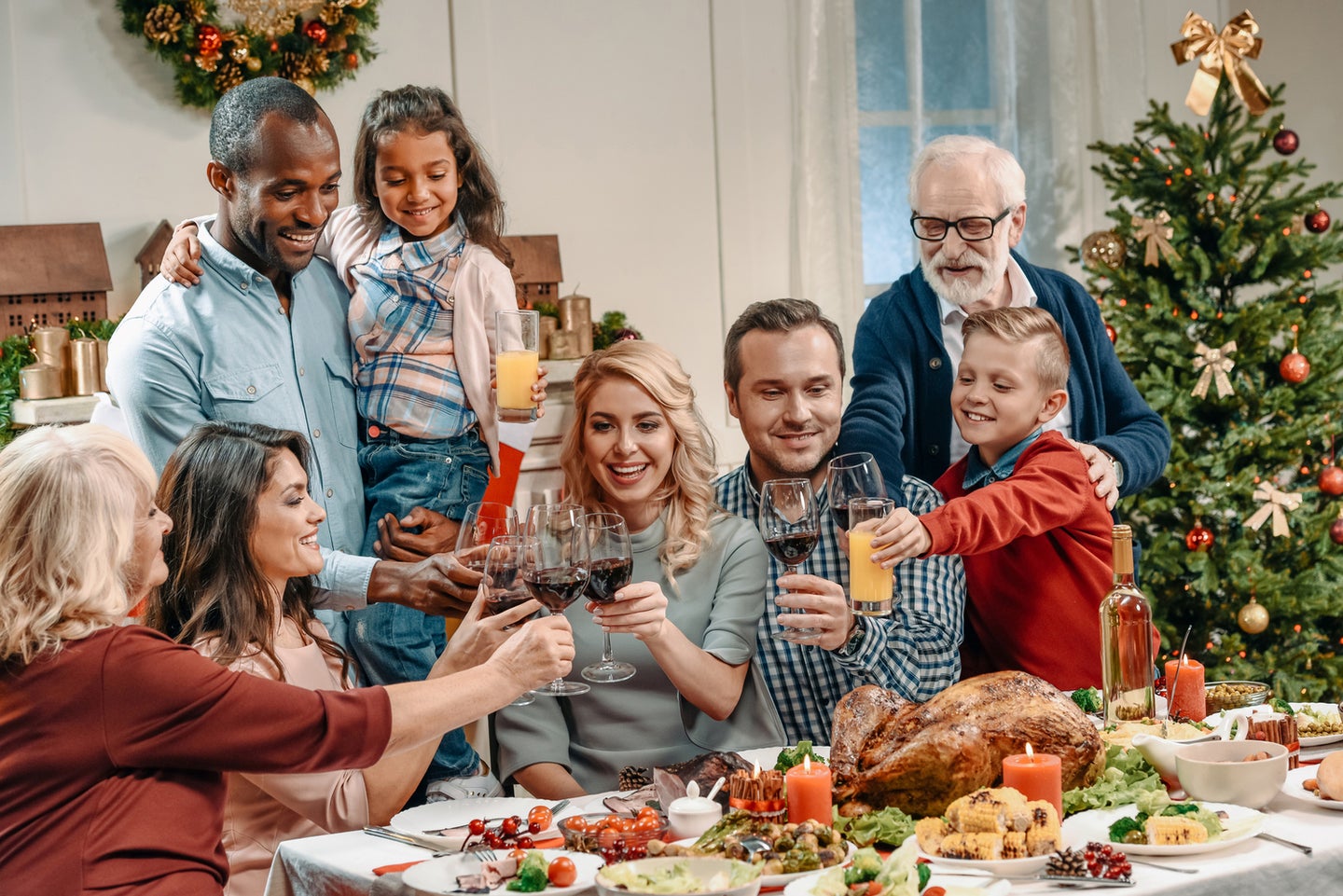 "This? Posed? Oh, no! We're a portrait-ready kind of family.". ArturVerkhovetskiy via de Deposit Photos
SHARE

The holidays are one of the best times to take family photos: everyone is free, happy, and trapped in a house, so they can’t run away when you demand they all line up for a picture.

But if you’re going to do it, you should do it right. Here’s how:

Choose your tool: Smartphone or DSLR?

A few years ago, this was an easy question to answer: DSLR all day. Yes, you’ll still get better photos if you know how to use a dedicated camera (whether that’s a DSLR or mirrorless one), but you’re more likely to mess things up if you don’t. Anyway, smartphone cameras are so good now that they’re the most sensible option for almost everyone. You’ll also be able to share the photos with people straight away, rather than having to transfer them to a computer, process the images, and then email them over two-to-four weeks later—if you even remember to.

There absolutely is a place for posed group shots (which we’ll cover later) but the nicest family photos are normally the candid ones: smiling kids tearing open presents on Christmas morning, your sister laughing in shock at your Grandad’s dirty joke, and so on.

Capturing candid photos isn’t particularly hard—you just have to be taking a photo at the right moment, and to do that, you need to have your camera out and ready. This is another place where smartphones have an advantage. Keeping a bulky DSLR on hand and ready to go is a lot more awkward than getting your iPhone out of your pocket and swiping the lock screen to access the camera.

To maximize your chance of catching the right moment, don’t shoot single photos—shoot bursts. If you’re using your smartphone, all you have to do is hold down the shutter button and it will keep shooting photos until you lift your finger. At the end, you can go through all the photos and pull out the best one. Using burst mode is the difference between OK pictures and incredible ones.

A big mistake people tend to make is shooting videos instead of photos at moments that are perfect for candid shots, such as gift opening on Christmas morning. There’s absolutely a place for videos, but it’s highly unlikely anybody will ever watch them after they’re taken. If you shoot photos instead, you’ll have something that’s easily shareable, printable, and frame-able.

One thing you definitely don’t need to worry about is being unobtrusive. Most people are so used to smartphones being everywhere that having someone shooting a few pictures for the ‘gram won’t distract them. And if anyone does say anything, just declare yourself the family’s official events photographer and keep on shooting.

Taking candid family photos is great fun and you’ll often get wonderful results. On the other hand, shooting posed group photos can be an absolute nightmare, whether with two or 222 people in the frame.

Since most group shots are ruined by people looking at three or four different “photographers,” the big rule for group shots is: one photographer, one camera. This way, at least everyone will know where they’re supposed to look. Enforce this rule and you’ll instantly have better group photos than most people.

Also, use only one camera—there’s no better way to annoy a group of people than having a photographer take the same photo with six phones. And annoyed people don’t pose well. Choose the best phone available—sure you have an uncle who’s already invested in the latest, trendiest phone—use it, and share the photo in the family group chat.

Another big mistake many families make is taking the group portrait too late. Indoor lighting at night is ugly, flashes are uglier, and drunk relatives… well, they don’t look their best. Instead of taking the group shot after the meal, take it as soon as everyone’s there—the earlier, the better.

It’ll be easier to find flattering light during the day so everyone looks good in the photo. The light that makes people look best is either in the shade outside or from a window indoors. If the weather allows it, take everyone outside and have them stand in the shadow of your house or a tree; if it’s freezing or lashing down outside, make your family line up inside against a wall facing a nice, big window. Again, a relatively small tweak like this will make your photos indescribably better.

Unlike with candid shots, directing people on where to stand and what to do will go a long way. If you’re really serious, send everyone our article on how to pose for pictures and insist they all do their homework and read it before coming over. Once your family is in position, make sure you can see everyone’s face clearly and that no one short is stuck in the back. If people are talking too much, tell them to keep quiet. The more authority you wield, the faster you’ll get a good photo.

If you have to be in the photo and there’s no one else to take it, get a cheap smartphone tripod, set it up on a chair or table to get more height, and use the camera’s built-in self-timer. Make sure to test things out before summoning the group together, though—they won’t be happy to wait while you bumble around lining up your shot.

Like with candids, the secret to taking good group photos is taking lots of them. Use burst mode and make everyone pose a few times. Keep taking pictures as people relax after posing—these can be the best ones. And even if they aren’t your best work, you’ll still be more likely to have at least one photo where everyone has their eyes open and looking at the camera.

Save or favorite your photos straight away

Taking pictures is great but do you know what’s better? Doing something with them. Way too many people forget about them, and gorgeous family shots end up lost in the uncharted depths of their camera roll, never to be seen again.

To stop this from happening, as soon as you know you’ve taken a good photo, either favorite it or add it to a separate album. That way, you’ll build an easy-to-find collection of lovely family photos that you can print out or send to your relatives as a present.

DIY
family portraits
Holiday
How to