Ethan Moses built a massive 20×24 instant camera, and he wants to shoot your portrait

20x24 Polaroid film may be extinct, but that didn't stop Ethan Moses from building his own 20x24 self-developing camera. 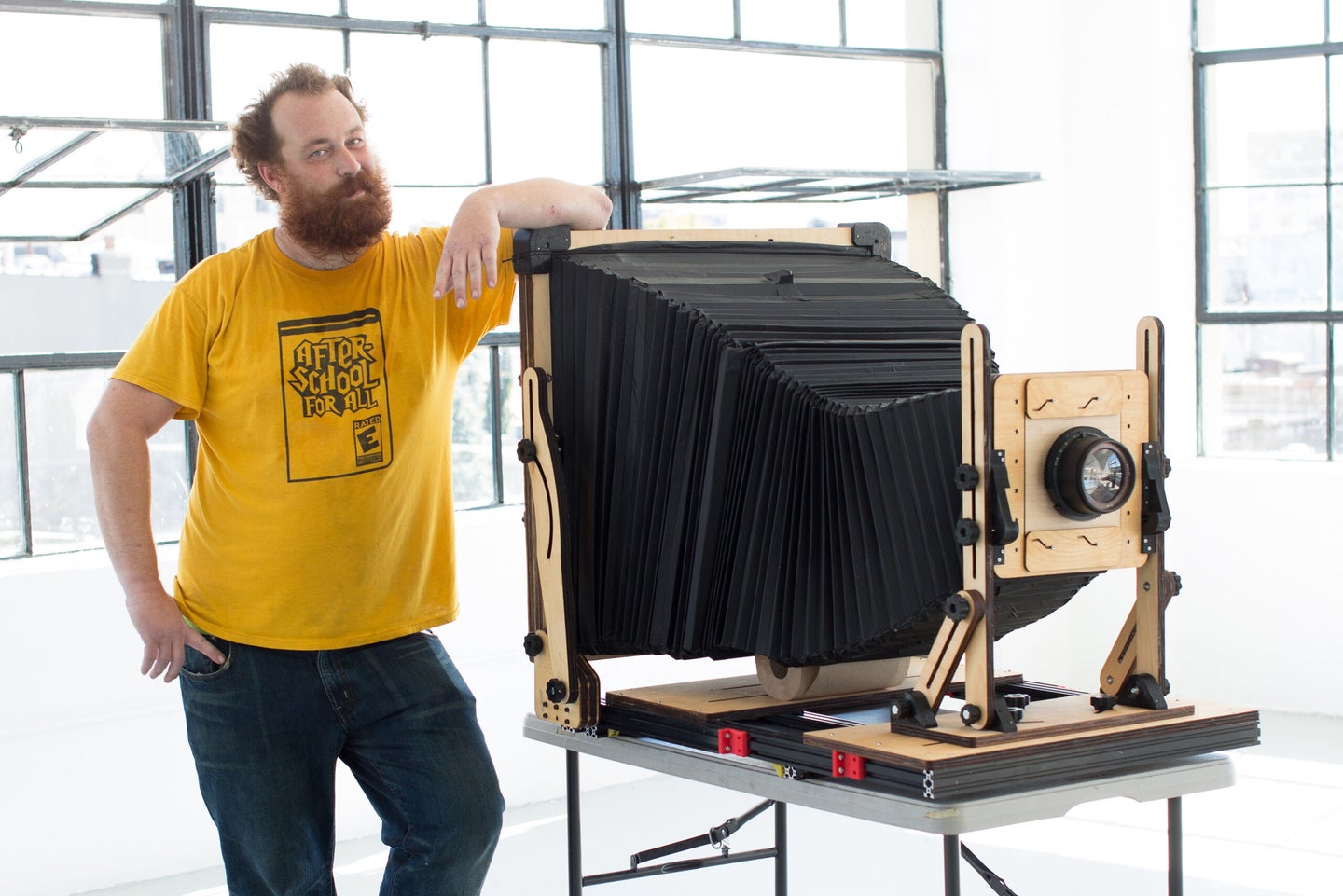 Ethan Moses is no stranger to building cameras. Over the years he’s created a series of 4×5 hand cameras, medium format cameras, and 35mm panoramic cameras—but for his latest creation, he decided to go big, really big. During the height of the pandemic, Moses set out to recreate Polaroid’s iconic 20×24 camera, capable of producing images 20 inches wide and 24 inches tall.

“Polaroid built the original 20×24 Polaroid cameras for demos and for advertising smaller products,” says Moses. But the camera was also popular with famous photographers and artists. The massive pieces of Polaroid film used by folks like William Wegman, Andy Warhol, Chuck Close, Mary Ellen Mark, and Elsa Dorfman ceased to exist back in 2017—the same year that John Reuter announced that he was closing down the 20×24 studio in Manhattan. But that didn’t deter Moses. His solution? To build a custom 20×24 camera that records positive prints directly onto a large piece of photo paper.

In use, Moses loads the photo paper in, makes an exposure, and then dumps chemistry directly into the film holder, allowing him to make the direct positive without needing a darkroom. ” I certainly didn’t invent huge cameras, but I think I am the first to invent a film holder that has a light baffle like a daylight developing tank so that you can process directly in the holder without a darkroom. Then, in a relatively uncontrolled environment, you can just take the back off the camera, lay it down on a table, and pour in a liter of chemistry and shake it around.”

Last month Moses traveled from his home in Albuquerque, New Mexico to Brooklyn, New York, and teamed up with Kyle Depew of Brooklyn Film Camera to offer portrait sessions and workshops at Wyckoff Windows Studio. The first two weekends sold out immediately, followed by a third additional weekend.

“In Albuquerque, if I do this, I have seven people show up to my backyard and I know them all,” says Moses. “But here, it was really an amazing thing how many people showed up. People came in from Seattle. One guy bailed on his wife for a day during his honeymoon to come to the workshop. Someone came from Minnesota.”

Here, Moses tells us about the process of building the camera and what it’s like to shoot with.

Where did the idea to build this 20×24 camera come from?

About 20 years ago, I was really into reading photo.net and the guy who ran it, Phillip Greenspun, his avatar was a 20×24 portrait shot by Elsa Dorfman showing him and a big white dog. It was great. And it’s a great regret of my life that I never spent the money and got my portrait taken by Elsa Dorfman while she was still alive. I’ve always had that in my head.

On the Homemade Camera Podcast, we were talking about it and the challenges of making self-developing cameras, like the Afghan box camera. And so we challenged ourselves to start working on these self-developing cameras. And at some point, we had been working on enough of these projects, perfecting the process, that I thought maybe we could use the knowledge to replicate the 20×24 Polaroid experience. Shooting with a 20×24 camera is an interesting process, but who wants a 20×24 negative?

When did the process of building it begin?

This is one of those cameras I wanted to build because I wanted to use it and see what it could produce. And it turns out, it takes portraits real nice. Anyway, during the pandemic, stuck in my garage, I bought a car-sized laser cutter. All of a sudden I could cut parts for this thing. For five months, I was just drawing and CADing and cutting and gluing and screwing. And I think this current version is about the seventh iteration of the camera. Usually, I’ll build a bunch of cameras, starting with one prototype. I’ll see what doesn’t work, leave it on the table, and build a whole new one until I get it right.

But this thing, it’s just too big. I would build one and be like, ‘Okay, I want to make this change,’ but then it would mean tearing the camera down. For a while I didn’t have a working camera, I just didn’t have space.

What were some of the things you had to troubleshoot while building it?

Oh god, everything. The camera has a bunch of different systems in it. It has a rail system, focusing system, front and rear standard, and a folding popup system that should be pretty rigid. The bellows each took some troubleshooting. I have maybe 150 pages of just hand drawings before all the CAD files, showing just how the rails work.

The real terrible one was the bellows, though. I’ve built hundreds of bellows for 4×5 cameras. You just build them flat on a table. But when you lay this thing out flat, it’s 14 feet by 17 feet. My buddy Joe and I tried to build this, and it was like we’re trying to do one-handed pushups and use spray glue with the other hand. Neither of us are in good shape, it’s 100 degrees and we’re laid out on my driveway in Albuquerque. It just turned into such a mess so quickly. I spent another week building this giant obelisk as a bellows form. For six hours straight, I just glued fabric together and laser-cut ribs—hundreds of them.

This was one the camera’s first time out in the wild, how have people been reacting to it during the portrait sessions?

People have been super into it. It’s been really wild. I’m used to a life where nobody is interested in what I’m super psyched about. But here, I think the people are more psyched about the big camera than I am, and I built it. I devoted five months of my life to building it. People love the magic trick of it, I think. It’s a novelty act—to us and to everybody. What we found out is once in a while, it makes really great pictures with a really unique look. The obvious thing to do is portraits, even a photo booth. You can do a lot of them, they’re pretty fun. Everybody looks different and beautiful in their own way. And it’s just so well-suited to portraits. It’s got a really shallow depth of field, so the subject needs to be really still. It’s really hard to operate under daylight, so strobe lights make it much easier.

What’s your strobe setup with the camera?

I have these heads and Speedotron packs from the ’90s. They were the most powerful ones from the days of film. These are what you would use to light up a basketball stadium. When I pop a strobe, there’s a ton of light being dumped through two heads. The exposure time ends up being about 1/60 of a second. I have not yet built a shutter for any of these huge lenses. What I’ve been doing is just capping the lens, dimming the lights, and then I uncap the lens. I hold a filter gel pack over the lens just to color compensate because you don’t have any intermediate steps like printing or scanning. And then I just pop the strobe, and that’s basically the shutter rate.

What lenses are you using with the 20×24 camera?

The one that I really like is a Lomo process lens that I picked up from Russia on eBay years ago in anticipation of one day building a camera like this. The other one I have is an APO Nikkor 600mm. When I committed to Kyle, I immediately ordered from Japan another process lens that would cover us, just in case I dropped the Lomo lens. I didn’t want to have to wait another three months or hunt for years on eBay for such a thing. They’re rare and beautiful. They were designed for Xerox machines before there were scanners.

People are digging it. I’m going to see where it goes. Maybe I will do some more 20×24 workshops, but I need to sleep for a month.  When I’m taking pictures with it, there are three people working. If I did this in Albuquerque, I wouldn’t have the space. But even if I had the space, I’d have nobody to take pictures of. I’d have nobody to shake my trays. I’d have nobody to load the film. I’d have nobody to greet my subjects. After New York, I initially thought I would go back home and sell miniature versions of the camera. But shooting with the big version is pretty fun and a lot of people are way more into having their portraits shot than they are into buying camera parts or obscure cameras.

Ethan Moses is currently raising funds on Kickstarter to bring his 20×24 camera to Los Angeles next.