Moody colors and a double exposure feature cater to those with a fondness for old-school vibes. 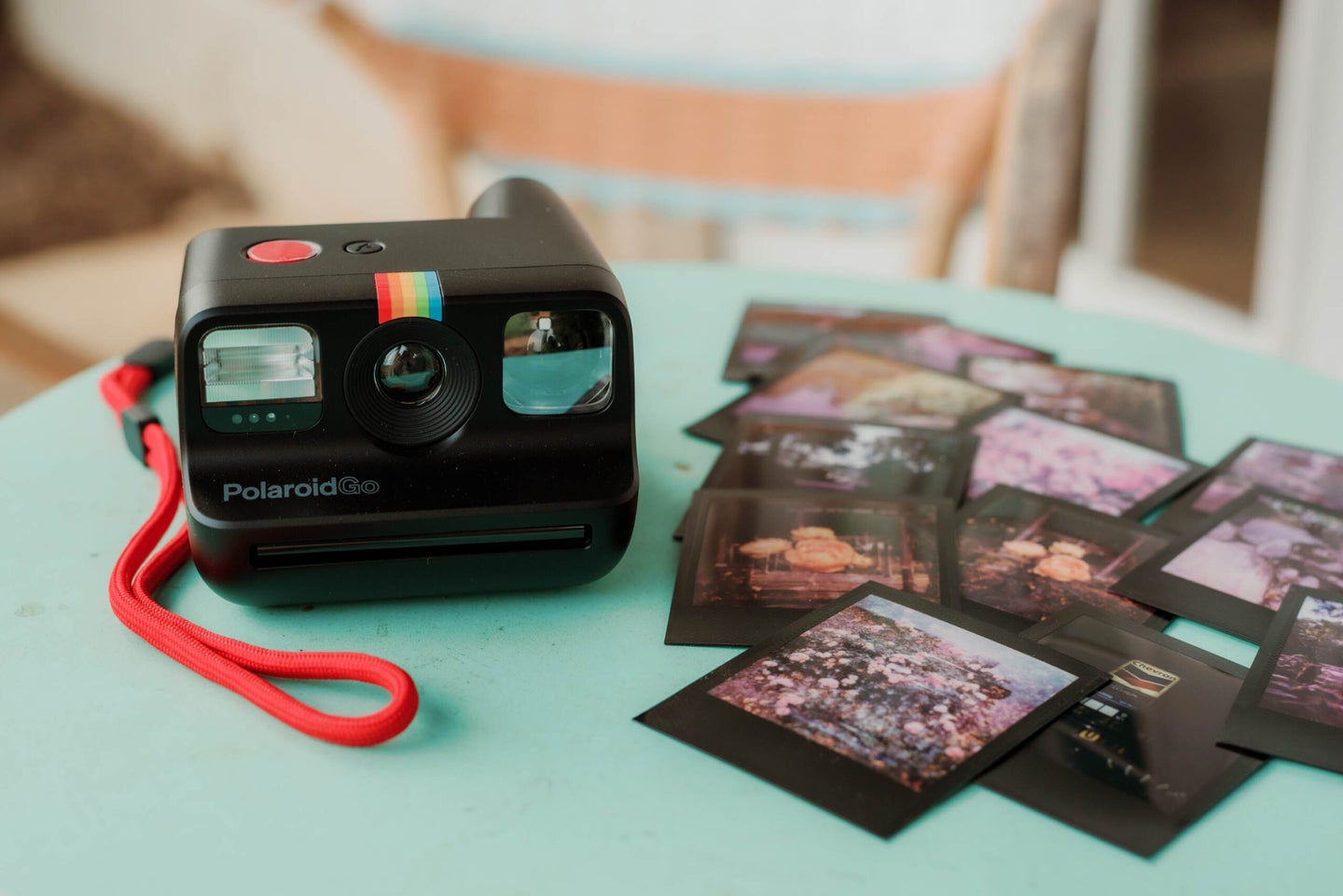 Instant photos sure pack a nostalgic punch. Maybe it’s the tangible aspect of a real photo in your hands instead of one floating in the cloud. Maybe it’s the way the images come out just a little imperfect that adds to the charm. But whatever it is, there’s no denying that where there’s instant film, there is fun being had. And no company is more synonymous with instant photography than Polaroid.

With the release of Polaroid Go’s two new colorways, we decided to finally give this tiny camera a whirl for ourselves. In short: it’s definitely a delight. Pocketable and extremely portable; the design should appeal as much to the younger set as to those who grew up with the original. It creates prints in miniature (though personally, I find the colors leave something to be desired), and has a fun double exposure feature for the adventurous experimentalist.

In addition to the classic white, the Polaroid Go now comes in black and red models. In tandem with the release of the camera bodies, the company also debuted a set of lens filters in red, yellow, and blue, as well as a matte black-edge Go film.

As the world’s smallest instant camera at 4.1 inches long, 3.3 inches wide, and 2.4 inches tall, the Polaroid Go makes compact efficiency its middle name. With the camera in hand, all the buttons you’d need—shutter, flash, and power—are situated together on the right side while the viewfinder is on the left.

On the front of the camera, the lens sits center, flanked by the flash on the left and the viewfinder on the right—the latter doubles as a selfie mirror thanks to a reflective coating. Because of the compact nature, I sometimes found my finger obscuring the flash, but overall, I appreciated the size of the Go, which felt manageable. However, I do have fairly small hands, so I could see how the diminutive size of this camera could be a major point of frustration.

Related: How to digitize an instant photo in three easy steps

The camera’s shooting options are all controlled by the flash button. Press it twice in rapid succession to activate the double exposure mode. Activate or deactivate the self-timer by holding it down for two seconds. Hit it once to turn the flash on and again to turn it off. And that’s it. Everything else is automatic, so just press the shutter when you’re ready.

The entirety of the camera is basically plastic, which makes it incredibly light and easy to handle while still feeling solid. There’s nothing fragile about it, and it happily dangles from the included wrist strap for easy access. Essentially, the Go is the mini version of the Polaroid Now, but the layout and lens do allude to the extremely classic SX-70 Land Camera.

Loading the film is self explanatory. Line up the arrows on the cartridge with those on the camera and drop it in, chunky end first. Unlike the larger cameras, which load from the front, the Polaroid Go has a little film hatch at the bottom. Do not peel off the tape on the cartridge; you’ll need it to pull it out after it’s empty.

To test the Go, I took it on a spin at my local botanical garden and also to a Waffle House (as one does in the South) to see how it’d do at night. I shot a mix of flash/no flash and a handful of double exposures (plus one selfie).

I admit that I was already smitten before the first picture, purely on the basis of its size. My current obsession is the pocket camera. And while the Go is indeed a portable dream, there are other features worth discussing, for better or worse.

While this feature is fun, it can at times be confusing, specifically when there’s a delay between the first and second exposure. For example, I wanted to do an overlay of flowers at the botanical garden with my typewriter at home. So, I put my camera in double exposure mode, took a photo of the typewriter, and turned it off. According to Polaroid, the camera will “remember” you’re in double exposure mode, so when you arrive at your next location and turn it on, you can make the second photo.

Remember to turn off the flash…

As far as flash is concerned, I preferred to keep it off in broad daylight. But, it perfectly delivers the harsh ‘90s candid vibe, if that is what you’re after. However, one thing that frustrated me—particularly with double exposures—is that the flash is automatically activated. This meant I had to remember to disable it each time I went to take a new shot. I’m forgetful and thus ended up firing it a few more times than I had planned.

Like the other Polaroid cameras, you only get eight shots per pack of film, which is fine. What I did find odd (and somewhat counterintuitive to the whole ‘instant’ promise) was the awkward film shield that rolls out on top of the photo after it’s printed, as well as the necessity to wait five seconds before pulling the print out of the slot. The film shield is just a thin sheet of dark gray plastic that rolls out with the picture to protect it from light. Though you are supposed to let the Polaroid develop in the dark, other instant cameras I’ve used do not require such a feature. You simply stuff the picture in your pocket as fast as possible. I’m not particularly fond of the shield as it felt that I might accidentally bend it.

Finally, while I love the compactness of this camera, I did have a couple of scares, including nearly wasting a precious sheet of already scarce film by accidentally pushing the shutter button. Since I’m right handed, I would always reach for the camera with that hand, but the shutter is also on the right side. It doesn’t help that I’m also notorious for forgetting to turn off any camera—I have had plenty of “what is that?” shots in the past.

Objectively, I would describe the Polaroid Go image colors as moody ‘90s nostalgia with exuberant sepia undertones. With or without flash, there’s a hazy imperfection that lends a certain charm. Am I head-over-heels? Not exactly, but in a way that is more so personal taste than quality.

Compared to photographs I have made with the Polaroid One Step and the Fujifilm Instax Wide, the latter two produce cleaner, brighter images. I tend to favor this in my work. However, the Polaroid Go is a vibe—I see many people shoot their film (instant or not) this way, so it’s by no means bad.

Polaroid’s main competitor in the instant space is Fujifilm, which offers a fine line of products, too, and at a slightly (emphasis on slightly) lower price point. Cameras like the Fujifilm SQ1 will also produce a square image, and you can snag a pack of 20 frames at a little less than $1 each on Amazon. Meanwhile, 16 Go photos will cost you about $20.

That being said, the Polaroid Go is a solid choice if you value a compact design, as the Fujifilm options are a lot bigger. It also comes down to your stylistic choice and how you want your colors to turn out. The Go flash covers up to two meters (6.56 feet), while Fujifilm claims that its flash on the SQ 1 is effective up to 7.2 feet.

Overall, the Polaroid Go really appeals to those who love the brand and what it’s represented over the years. From the retro, reminiscent design to the vintage cast in the film, it’s definitely something that’ll bring back (and preserve) memories, new and old.

However, the price of the film and hiccups in user experience design leave a little bit to be desired. And with the price of film these days, saving a few pennies never hurts. It ultimately comes down to your personal artistic preferences, which should then dictate the system you buy into.