The RX100 IV puts smartphones in their place 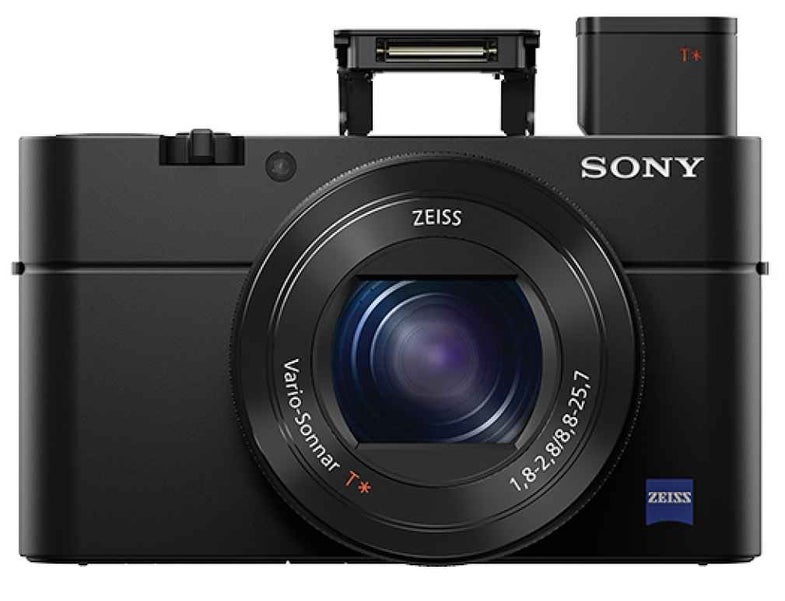 After the cheap end of the compact camera market was gobbled up by smartphones, camera makers had to upgrade their fancier compacts to keep ahead of the curve. This typically means 1-inch or larger sensors, fast lenses, and better low-light performance. With the latest iteration of its Cyber-shot RX100, the Mark IV, Sony employs the first stacked CMOS sensor to give this camera’s imaging core the most power it’s ever had.

The stacked sensor of the RX100 IV is exactly as it sounds. The imaging sensor sits directly on top of another layer of silicon for processing and DRAM memory. As a result, the camera can pull data off of the sensor five times faster, letting you grab RAW+JPEG bursts at a speed of 16 frames per second at the camera’s full 20.1MP resolution, record slow-motion video at up to 960 fps, and shoot 4K video using the full width of the sensor. Plus, the mechanical shutter that tops out at 1/2000 sec is supplemented by an electronic shutter that can now get as fast as 1/32,000 sec.

We wasted no time ushering the $948 (street) RX100 IV into the Popular Photography Test Lab before taking it out for field testing.

In the Test Lab While premium compacts can capture significantly more detail than most smartphones, a 1-inch sensor typically can’t match an APS-C or full-framer. The RX100 IV earned our second-best rating, Extremely High, in overall image quality from its lowest sensitivity of ISO 80 through ISO 200. Above that point, both resolution and noise degraded too much to maintain the Extremely High rating.

Hues proved just true enough to win an Excellent rating in color accuracy. It scored an average Delta E of 7.7 to land just below our cutoff of 8.

Resolution took a small step above the RX100 II, the last in this series we tested. At ISO 80 the new camera captured 2325 lines per picture height. To compare, Canon’s Powershot G7 X, another compact with a 1-inch CMOS, captured 2300 lines at its lowest sensitivity of ISO 125. Panasonic’s Lumix LX100, with a larger Four Thirds sensor, got 2375 lines at its lowest sensitivity of ISO 100. And Ricoh’s GR, with an APS-C sensor, netted 2425 lines at ISO 100.

Noise could have been lower, but the Sony RX100 IV did well for a 1-incher. It never beat a Very Low rating and it held a Low or better score only up to ISO 200. Noise rated Unacceptable from ISO 1600 through 12,800, though the numbers didn’t hit the stratosphere. Canon’s G7 X wasn’t quite as clean at the lowest ISOs, but from ISO 200 though 3200 it produced slightly cleaner images with a bit less resolving power. The Panasonic was less noisy at all ISOs it shares with the Sony. The Ricoh produced less noise up to ISO 1600, after which the Sony did better, though both were in Unacceptable territory.

In our test of the RX100 IV’s image stabilization, our testers managed to get 3.5 stops of shutter speed advantage when handholding with the lens zoomed to its 70mm equivalent.

In the Field The RX100 IV’s body design stays pretty much the same as its predecessor. It lacks a sculpted grip, feeling like a really small Leica, sans vulcanite, in the hand. It retains the pop-up OLED EVF as well as the tiny pop-up flash. The ring on the lens barrel can control any of nine functions. When set to control zoom, it lets you choose between two speeds or opt for step zoom, where it will step between 24-, 28-, 35-, 50-, and 70mm. There’s a lot of flexibility in configuring the controls.

The 3-inch LCD can tilt 180 degrees upward to face forward. Wi-Fi lets you trigger the camera with your phone using Sony’s PlayMemories Mobile app and share those selfies on the spot.

Burst shooting proved solid as the Speed-Priority mode captures a blazingly fast string of images, though with focus and exposure locked after the first frame. The slower 5.5 fps mode also did well: Continuous AF kept up as subjects moved swiftly toward the camera. Video capture is as intense as you can get in a compact of this size. High-definition footage showed almost no jello effect even with fast-moving subjects, probably due to the greatly increased readout speed of the stacked sensor. Our footage showed plenty of detail, and colors looked very pleasing. We currently don’t have a 4K display for critical viewing of 4K video, so we can’t accurately judge its quality.

We can assess the RX100 IV’s slow-motion video, however. Sony calls it High Frame Rate mode, complete with its own HFR spot on the shooting mode dial. In a menu, you select among capture rates of 240, 480, and 960 fps, then pick from file output frame rates of 24p, 30p, or 60p. By mixing these two options in different ways, you can slow motion by 4 to 40 times. You’re limited to capturing 2 sec of footage in Quality Priority mode or 4 sec in Shoot Time Priority mode. When shooting, you place the camera in standby first and then use the movie record button to start or end the shot. The camera buffers the footage and then renders it out in the video format you chose. You end up with a high-def video clip that’s much longer than the 2 or 4 seconds of motion you initially captured.

We had a lot of fun using HFR. But the shutter speed necessary for 960-fps capture may require more light or higher ISO settings than normal, which will produce seriously grainy video. Still, we were impressed with the footage we got in bright conditions at lower ISOs. It’s not quite as sharp as the regular HD, and some artifacts showed up (especially when outputting at 24p), but overall, we were very pleased.

The Bottom Line The RX100 IV made us feel a bit like Goldilocks. The Ricoh GR costs less and captures more detail, but it lacks a viewfinder, provides just one focal length, and isn’t really built for video. The Canon G7 X also costs less, but lacks a finder and cannot match the video acrobatics of the Sony. Panasonic’s LX100, again less pricey, probably makes the most compelling alternative since it offers a finder, very similar zoom and aperture ranges, and a unique 4K still capture mode that makes it easy to pull a single frame from your video. It’s a tad larger than the Sony, though, and doesn’t provide the thrill of slo-mo.

It’s nearly a toss up, but if forced to pick one as Just Right, we’d likely go with the RX100 IV.