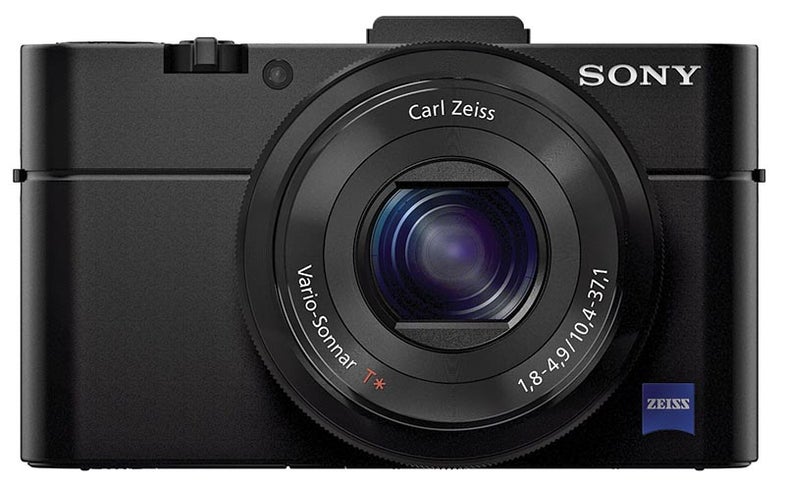 This year saw a slew of fancy compact cameras introduced, as the smartphone camera continues to unseat point-and-shoots for casual photographs. On the lower end, these cameras use 1/1.7-inch sensors, such as those found in Canon’s PowerShot G16 and Nikon’s Coolpix P7800. On the higher end are those with APS-C sensors, such as Nikon’s Coolpix A and Ricoh’s GR, plus Sony’s full-frame Cyber-shot RX1. But Sony is also betting on a middle ground with its RX100 II. An update of last year’s popular RX100, this new version maintains the 1-inch sensor size and 20.2MP spec, but the circuitry for the sensor has been moved to the back side of the chip. Generally referred to as a back-side illuminated (BSI) design, Sony calls its version Exmor R. This design, by allowing for larger pixels, promises lower noise at equivalent sensitivity settings. We ran the RX100 II through the Popular Photography Test Lab to see how Sony’s claims pan out, and to look for any surprises.

In the Test Lab
The RX100 II earned an Extremely High rating in overall Image Quality at its lowest sensitivity setting of ISO 100—the same rating the RX100 got at its lowest setting of ISO 80. The resolution of both cameras drops one rating grade once you go beyond their respective minimum ISOs. Given that the sensor in the RX100 II is of a completely different architecture, we were surprised at how close the resolution numbers were. The RX100 II turned in 2280 lines per picture height at ISO 100, while its predecessor yielded 2270 lines at ISO 80. Through the ISO range the two cameras delivered virtually the same resolution: By ISO 6400, the RX100 II captured 1950 lines; the older camera, 1930 lines. The RX100 II lets you shoot at ISO 12,800, where it got 1900 lines, enough for a High rating; the older camera tops out at ISO 6400.

Sony seems to have delivered, for the most part, on its claim of a one-stop improvement in noise reduction. Through ISO 200, the RX100 II tested one rating level better than the older camera. And the RX100 II doesn’t reach an Unacceptable rating until ISO 1600, while the RX100 hit that rating by ISO 800. While noise measures high in the RX100 II, Sony does apply enough noise reduction to minimize that snowy luminance-noise look. This smoothed-out appearance in images comes at the expense of reduced resolution, as noted.

We also compared it with our test of a popular smartphone, Apple’s iPhone 4S—and the Sony prevailed. Even at its highest ISO, the RX100 II served up more resolution than the iPhone 4S did at ISO 64, where it captured 1730 lines. (The iPhone 5S will likely do better than the 4S—we will report on it soon.) As did its predecessor, the RX100 II aced our color accuracy test, this time with an average Delta E of 7.8—not quite as slick as its predecessor’s 6.6, but still good enough for top honors in our test.

In the Field
The design of the RX100 II is extremely similar to the original RX100. The new version has a tilting LCD, which certainly comes in handy when shooting at low or high vantage points and can help ward off glare when shooting on sunny days. Sony also added its Multi-Interface Shoe to the top, which means you can mount Sony’s excellent FDA-EV1MK OLED electronic viewfinder if you’re willing to lay down an extra $450. We used the finder during our test and it’s a joy to use. But while we definitely like the experience, it’s hard to say whether this expense is too much for a camera like this.

The shoe also opens up the use of other Sony accessories, such as the ECM-XYST1M stereo mic ($160, street). Some might find the mic unnecessary, though, since the RX100 II has a built-in—yet not as fancy—stereo mic. The other main addition to the RX100 II is Wi-Fi. Using Sony’s app for iPhone or Android, you can control the camera, fire the shutter, and transfer files to your phone for upload to your favorite social media site. The app worked well for us, and was a convenient way to share images on the fly. All our friends were able to see what we ate for brunch before we even finished the last bite. Isn’t that what photography is all about?

Other than those additions, the RX100 II is very much like its predecessor in general use. The lens is the same great 28–100mm f/1.8–4.9 Zeiss T* on the RX100. Video remains quite nice for a camera of its size, and should please most shooters who aren’t expecting the same level of video as from, say, a Canon EOS 5D Mark III.

The Bottom Line
The RX100 II is a fantastic compact camera whose time, sadly, may have passed. Its innards have been replicated in the QX100, which will save you about $250 if you don’t mind using your phone as your camera interface—something many millions of people continually show they don’t mind in the least.

You can get the Ricoh GR, with its APS-C-sized sensor, for about $50 more than this Sony. In fairness, the GR doesn’t have a tilting screen or Wi-Fi, and it isn’t as user-friendly as the RX100 II. Plus, Sony’s convenient features, such as Stitch Panorama and Handheld Twilight mode, which merges six shots for reduced noise in dimly lit scenarios, might be enough to win over some shooters.

Time will tell (and soon) whether there’s a place in the hearts of casual photographers for cameras like this one.