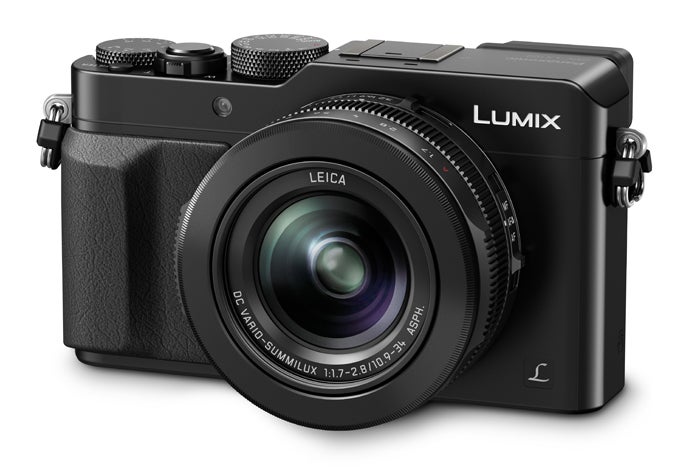 The new LX100 becomes the top dog for the popular LX series of compact cameras. It sports a 12.8 MP Four Thirds-size sensor, clearly taking aim at Nikon’s Coolpix A and Ricoh’s GR compacts that use APS-C-sized sensors. While those two have prime lenses, this Lumix includes a 24-75mm (equiv.) f/1.7-2.8 zoom lens. Comprised of 11 elements in 8 groups, including 5 aspheric elements (two of which are also ED), the lens can move 6 of the 8 groups when zooming and focusing. That flexibility, along with a very tight 3 micrometer tolerance for centering those lens elements, lets Panasonic maintain sharpness while shrinking the physical size of the lens. A 2,764,000-dot (equiv) EVF provides eye-level framing, while a 3-inch 921,000-dot LCD is on the camera back.

Video shooters should appreciate the 4K (3840×2160) 30fps capture, as well as the 1920x1080p 60fps recording. Panasonic also has a new 4K Photo mode that lets you pull 8MP images from 4K video footage in the camera. This, along with some new creative filter options will also find their way to the GH4 and FZ1000 through a firmware upgrade in October.

The LX100 employs Panasonic’s Depth from Defocus technology. By understanding the characteristics of the out of focus image, the camera can tell which direction the lens must move in order to achieve proper focus. This helps speed up the camera’s contrast AF in a similar way that embedded phase detection points do in some models made by other manufacturers. Burst mode tops out at 6.5fps with continuous focus tracking and 11 fps if you can live with locking the focus after the first frame. Built-in WiFi with NFC rounds out the LX100’s features.

The Lumix GM5 follows in the footsteps of the GM1. Something of a step up from the GM1, the GM5 has a built-in 1,166,00-dot EVF, 16MP Live MOS sensor, and a top ISO of 25,600. The contrast AF system operates at a 240 fps sampling rate to help speed things along. A 3-inch 921,000-dot LCD provides a view of the scene from the back of the camera and an all important touchscreen interface for this tiny body. Video recording tops out at 1920x1080p 60fps. A Snap Movie mode takes its cue from the popularity of Twitter’s short-format Vine. You can record short clips, apply various filters, and string them together to make a relatively concise video that works well for sharing on social media. Built-in WiFi lets you share those videos through your smartphone. There’s no built-in flash, but the GM5 will ship with a GN19 (ISO 100) hot-shoe unit.

Since the GM1 and GM5 bodies are so small that regular Micro Four Thirds lenses extend past the bottom of the bodies, Panasonic has redesigned the barrel of the 14mm f/2.5 lens to fit these new cameras. In addition, the new Lumix G Vario 35-100mm f/4-5.6 Asph Mega OIS lens is sized to fit these little cameras. It employs 11 elements in 9 groups with 2 ED elements to minimize chromatic aberration and one aspheric to help manage the physical size.

The LX100 is expected to ship toward the end of October, while the GM5 and the lenses will ship in November. Pricing has yet to be announced.