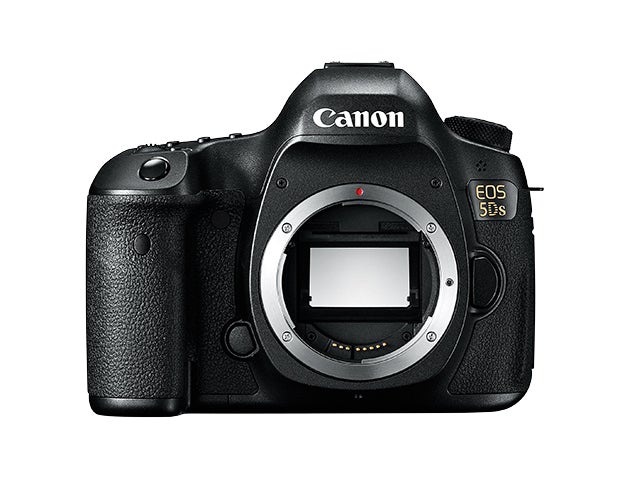 In this episode of How Many Pixels Can You Fit on a 35mm Sensor? we see Canon stuff 50.6 million into that familiar frame. While many people have loudly questioned the need, the Canon EOS 5Ds captures a massive amount of image detail. The previous pixel champs, Sony’s Alpha 7R (36.4MP) and Nikon’s D810 (36.3MP), trail it by more than 10MP each. Of course, Sony’s new A7R II comes closer with 42.4MP, but you’ll have to wait until next month for us to test that one.

Obviously, pixels do not a camera make. The Canon EOS 5Ds also includes a 61-point phase-detect autofocus system with 41 cross-type points, five of which are dual crosses. Dual Digic 6 processors blaze through data, allowing a burst speed of 5 frames per second for up to 14 full-sized RAW frames when using a UDMA 7 CF or UHS-I SD card. A built-in intervalometer makes time-lapse capture easier; the time-lapse movie function makes it even simpler by assembling the video file for you and outputting it as a 1080p 30-fps video. Canon even redesigned the mirror mechanism by using a motor and cams to reduce the intensity of mirror slap; you can set a slight delay between when the mirror goes up to when the shutter exposes the sensor to further lessen the impact.

With all of that technology on hand to make sure that you capture as much detail as possible, we were eager to see how the 5Ds fared in the Popular Photography Test Lab and in the field.

In our color accuracy test the 5Ds earned an Excellent rating with an average Delta E of 7.3. Add that to the massive resolving power and the well-controlled noise, especially given the high pixel count, and the Canon EOS 5Ds earns an overall image quality rating of Excellent from ISO 50 through ISO 1600.

In our grading system, when resolution is enough for an Excellent rating and color accuracy also scores Excellent, the range of the overall image quality score ends up bounded by the noise results. The Canon EOS 5Ds earned noise ratings of Low or better up to ISO 1600. At ISO 3200, noise rose to Moderately Low. At ISO 6400 and 12,800, it hit Unacceptable ratings. As its curtailed resolution numbers imply, though, ISO 12,800 required quite a bit of noise reduction to keep the score as low as 3.9. The result is a nice compromise, but shooters who value very clean images or really want to maximize resolution will probably want to stick with ISO 1600 and below.

The 5Ds’s autofocus proved slightly faster than the D810’s at most light levels in our test. At the brightest, EV 12, the Canon focused in 0.38 sec versus the Nikon’s 0.43 sec. It maintained a lead (always by less than 0.1 sec) through EV 1, where the two cameras tied at 0.81 sec. The two tied again at EV –1, taking 1.05 sec to focus, though again the Canon kept its modest edge at EV 0 and EV –2. Both DSLRs became less consistent in very low light—common of most AF systems.

As we mentioned in our hands-on review of the 5Ds and 5Ds R in the July issue, the camera body closely resembles the 5D Mark III. If you’ve shot with that or any recent Canon pro-level body, you should feel at home. (The only difference between the two 5Ds models is that the R omits the anti-aliasing filter.)

The extensive menu system is organized in the same way as the 5D Mark III’s. It can feel overwhelming, but with the vast number of features in cameras these days, it’s hard to avoid such huge menu systems. One obvious drawback is that some functions, such as Format Card, get buried—in this case on the first page of the wrench menu among 23 pages of options. One plus: the visual indicators on the custom controls screen. As you cycle through the assignable buttons, an illustration of the camera body highlights the location of each. This isn’t new to Canon, but it’s a very useful tool.

Just as useful, and something that every digital camera should have, is the 5Ds’s bulb timer. While you once had to hold the shutter button or lock the remote trigger for an exposure longer than 30 seconds, the bulb timer lets you set the exposure time from a full second to just under 100 hours. Similarly, the built-in intervalometer can shoot up to 99 frames across the same time range.

Canon’s new mirror control mechanism actually has a palpable affect on the shooting process. The DSLR is both quieter and less jarring when capturing. It’s subtle, but it did make photographing more relaxing while presumably netting sharper shots. Burst shooting tops out at 5 fps, the same rate as Nikon’s D810. But the 5Ds can snap 14 RAW frames before the buffer fills, versus 23 shots with the D810. If you don’t fill the buffer with each burst, you might just be ok with 14 frames. When capturing JPEGs and using a UDMA 7 or faster CF card, or a UHS-I SD card, you can shoot to the card’s capacity. In our field tests, the 5Ds’s tracking AF did a fine job of keeping up with the camera’s burst speed.

Video tops out at 1080p at 30 fps. The D810 can reach 60 fps but doesn’t offer the choice of ALL-I or IPB compression schemes. This may be too esoteric to non-videophiles, but if you plan to lift still frames from your video, you should opt for Canon’s ALL-I compression, which will create a larger file size but maintain each frame as a separate unit. The video we captured with the 5Ds looked quite nice, with a moderate jello effect.

Unless you shoot digital medium-format, the 5Ds or 5Ds R will likely give you more pixels than you’re used to. With them come larger file sizes. You can expect RAW files that approach 90MB under some circumstances. Once you process them into uncompressed 16-bit TIFFs, files can top 300MB apiece. So take into account the capacity of your memory cards and hard drives. If you’re traveling with your camera, make sure you have space on your computer and portable backup drive.

The other side of that equation, of course, is the massive amount of detail in the images you’ll get. Not only can you pixel-peep the delicate structure of a butterfly’s wings, but you can crop the shot with near abandon and still have plenty of resolution to make very large prints.

Whatever you think of the pixel wars, you can’t deny the technological prowess of the Canon EOS 5Ds. Its ability to capture such fine detail allows us to document the world better than ever before. At the same time, our ability to express ourselves through the art of photography continues to deepen. This camera is at the forefront of its area of photographic technology. Many shooters will find it beyond their current needs, but, as we’ve seen before, those same people may just end up with a 50MP camera a couple of years from now.

In the meantime, if you’re trying to choose a pro-level Canon body, ask yourself whether sensitivity or resolving power is more important. If you want to be able to shoot in very dark conditions, you should be looking at the 5D Mark III for now. If you want all the image detail you can possibly get from a full-frame 35mm DSLR at the moment, the Canon EOS 5Ds or 5Ds R is the camera for you.