This is the first clear photo from NASA’s InSight spacecraft

Welcome to Mars, here is a selfie. 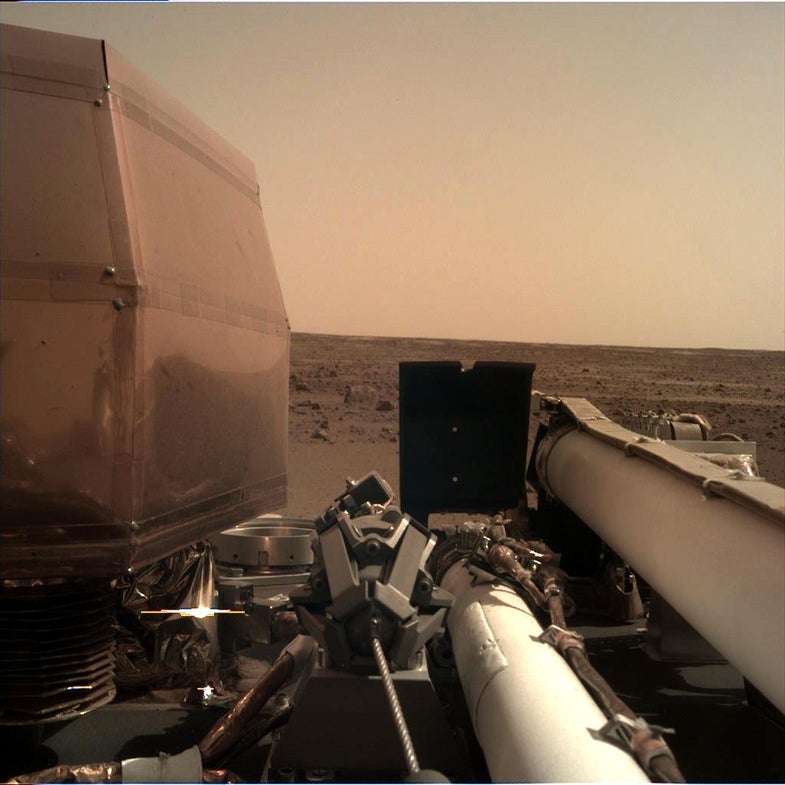 On Monday afternoon NASA successfully landed the InSight spacecraft on the surface on Mars after surviving ‘seven minutes of terror‘ to get there. The spacecraft beat the odds with its safe landing and has already released its first clear image from the surface—it happens to be a selfie.

In image was captured by the Instrument Deployment Camera (IDC), which is located on the InSight lander’s robotic arm. The image was relayed to Earth via the NASA’s Odyssey spacecraft that is currently orbiting Mars. InSight also sent signals to Earth to indicate that the solar panels had opened and started collecting sunlight. This means the spacecraft will be able to recharge itself each day and continue sending data back home.

“The InSight team can rest a little easier tonight now that we know the spacecraft solar arrays are deployed and recharging the batteries,”Tom Hoffman, InSight’s project manager at NASA’s Jet Propulsion Laboratory in Pasadena, California, which leads the mission, said in a statement last night after the landing. “It’s been a long day for the team. But tomorrow begins an exciting new chapter for InSight: surface operations and the beginning of the instrument deployment phase.”

Although the InSight “selfie” was the first clear photograph, earlier in the day the spacecraft captured an image while its transparent lens cover was still in place and shows a few pebbles from the surface of the red planet.

Related: This 15 minute time lapse from space takes you around the world twice

In the next few days the team will begin unstowing the spacecraft’s robotic arm and use the camera to photograph its surroundings. This will help NASA’s engineers determine where to place the scientific instruments that will be used to send data back to Earth.