This lens is big in size, reach, and image quality. 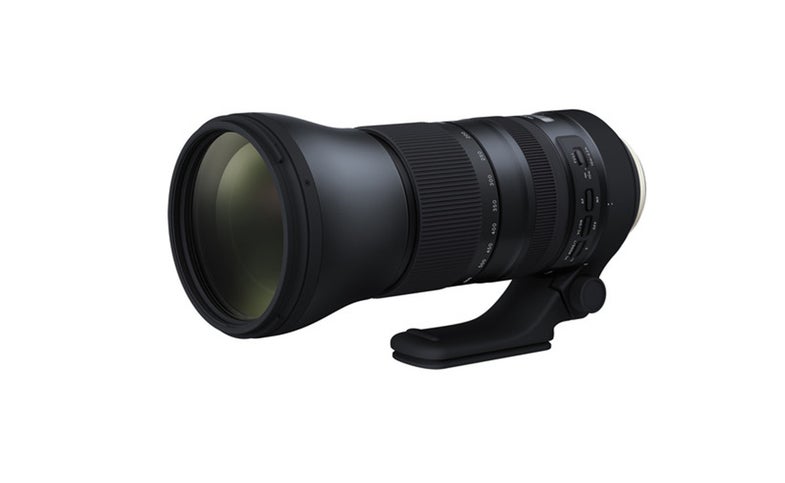 For wildlife, sports, and architectural detail photographers—to say nothing of paparazzi—a long telephoto lens is a must. Enter Tamron’s new full-frame SP 150–600mm f/5–6.3 Di VC USD G2, at $1,399 (street) for Canon, Nikon, and Sony (A-mount) DSLRs. A zoom this big probably won’t find a place in your everyday bag, but it will sure make a difference when you need it.

We tested the first iteration of Tamron’s 150–600mm zoom in our May 2014 issue, and we were especially pleased with the Very Good SQF rating it yielded at the 300mm focal length on our optical bench in the Popular Photography Test Lab. The second generation (hence the “G2”) offers a few notable improvements, including new anti-reflection coatings, a moisture-resistant construction, and compatibility with Tamron’s TAP-in firmware. It ships with a removable tripod mount, lenshood, and soft case.

More noteworthy is the optical design, which Tamron reports was formulated for high-resolution digital capture. It comprises 21 elements (up one) in 13 groups and includes three low-dispersion optics to fight chromatic aberration.

Tamron also boosted the speed of the autofocus and beefed up the Vibration Compensation system, which now has three modes. The standard setting provides an even balance between a stabilized viewfinder image and an optically stabilized photo; the second is just for panning; and the third setting forgoes the stabilization of the viewfinder image while compensating for camera shake only in the photos themselves.

Another improvement is a new zoom lock that lets you fix the zoom ring at a specific focal length—the previous model could only be locked in its contracted position. In our field testing we also noticed a decided lack of zoom creep, even with this lock disabled. That was not true of the original. If 600mm doesn’t cover enough ground for you, try pairing the lens with one of two new teleconverters Tamron made exclusively for this lens, designed to match its optics. The 1.4X converter ($419, street) boosts the focal range to 210–840mm, and the 2.0X converter ($439, street) doubles the range. One thing you’ll no longer get with a Tamron lens is the Silky-Pix Raw development software. Instead, buyers are now offered a 20 percent discount on Adobe’s Creative Cloud editing suite.

So how did the lens perform in our field and lab testing? Despite some initial skepticism, we were quite pleased with both its handling and its optical qualities, which proved worthy in both the controlled conditions of our Test Lab and in the real world. (Check out our hands-on assessment and sample image gallery.)

This lens, at 13.4 inches long when fully extended and 4.54 pounds, is hefty but similar to its predecessor and to its Sigma competitor, the 150–600mm f/5–6.3 DG Contemporary lens. Tamron shortened the zoom ring by at least half—too bad, because we prefer the wider ring. And on the G2 the focus scale, especially the feet markings, are a bit hard to read.

In the field, we appreciated the G2’s improved zoom motion and the speed and relative quiet of its AF mechanism. At 600mm, it did seem to hunt a bit when autofocusing, but that’s typical of this focal length. We were also a little disappointed by the absence of any memory buttons. On our optical bench, SQF results for sharpness and contrast earned an Excellent rating at all three focal lengths we tested: 150mm, 200mm, and 300mm—a remarkable breakthrough at 300mm, where the older Tamron and Sigma scored a lower Very Good rating. Our SQF bench tests only up to 300mm for a lens of this size, but our shots in the field at longer focal lengths looked good.

Our distortion tests using DxO Analyzer 6.1 revealed slight pincushion distortion at the 150mm, 300mm, and 600mm focal lengths, a very good result and similar to results for competitors. There was no light falloff at 300mm and vignetting was gone by f/5.6 at 150mm, but it took until f/8 to disappear at 600mm—exactly the same as with the original lens. The Sigma was similar, but had no vignetting at 600mm and falloff was gone by f/5.6 at 150mm and f/6.3 at 300mm.

The similarities end when comparing close-focus capabilities. This new Tamron set a record of 78.25 inches (a little over 6.5 feet). That may not sound close, but for a long telephoto it’s quite near; it beats its predecessor by 16.5 inches. It is also significantly shorter than the Sigma, which needs to be 105.41 inches away from a subject in order to focus.

Finally, Tamron’s VC mechanism produced a whopping extra 3.5 stops of handholdability in our tests at 600mm. That’s much better than the original zoom, which provided only 2.33 extra stops, and it holds a clear advantage over the Sigma’s 2.5 stops. We performed our tests only using the standard stabilization setting, and chances are you’ll want to use a tripod or at least a monopod with this big zoom. But it’s good to know that the option is there for field conditions and shooting scenarios where you can’t use a support.

Tamron reports that the older version of the lens will remain in its line-up for about $400 less than the previous price. Even so, this new 150–600mm represents a very good value—and it costs about $600 less than Sigma’s new Sports version. We think it’s very reasonably priced for its level of performance.

It’s clear that this monster glass has been substantially improved. Based on its lab performance, handy close–focusing distance, and enhanced magnification, Tamron has successfully upped the optics of this zoom. The terrific VC system only adds to its appeal.

Tamron reports that the older version of the lens will remain in its line-up for about $400 less than the previous price. Even so, this new 150–600mm represents a very good value—and it costs about $600 less than Sigma’s new Sports version. We think it’s very reasonably priced for its level of performance.

It’s clear that this monster glass has been substantially improved. Based on its lab performance, handy close–focusing distance, and enhanced magnification, Tamron has successfully upped the optics of this zoom. The terrific VC system only adds to its appeal.