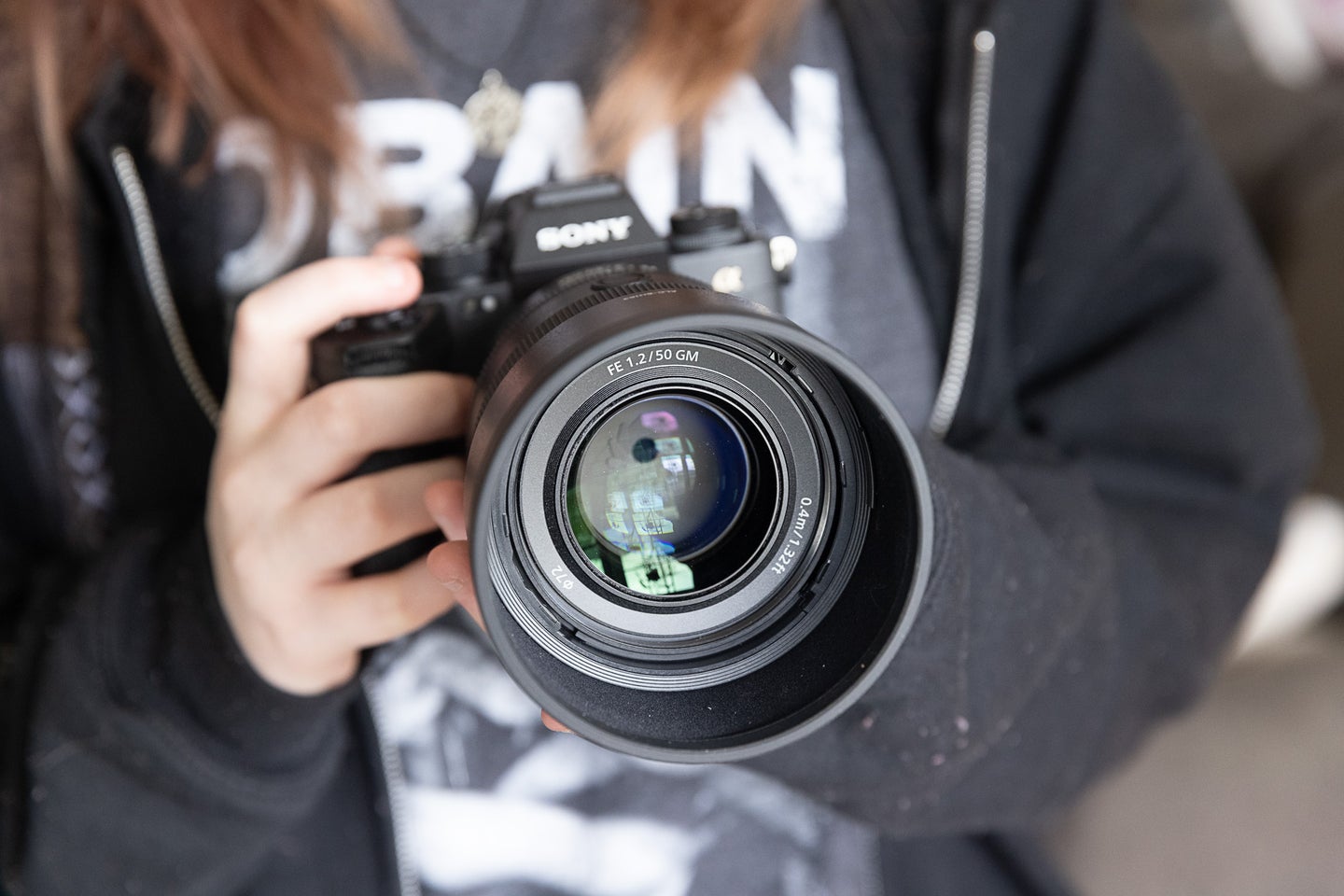 Despite all that glass inside, it's smaller and lighter than its competition. Stan Horaczek
SHARE

Shooting wide open on an f/1.2 lens can be tricky. With an aperture that large, your depth of field shrinks to a band of focus so narrow that it’s almost ridiculous. Shoot a loose headshot and, if your subject’s eye is in focus, the tips of their eyelashes will turn blurry. Nailing that focus is fickle. Mirrorless cameras excel when it comes to focus tracking, and so the 50mm f/1.2 has become a staple of the major full-frame mirrorless camera platforms from Canon and Nikon. Now, the $2,000 Sony 50mm f/1.2 GM lens has joined the party, and it delivers truly exceptional image quality in a relatively compact package.

Shooting wide open on an f/1.2 lens can be tricky. With an aperture that large, your depth of field shrinks to a band of focus so narrow that it’s almost ridiculous. Shoot a loose headshot and, if your subject’s eye is in focus, the tips of their eyelashes will turn blurry. Nailing that focus is fickle. Mirrorless cameras excel when it comes to focus tracking, and so the 50mm f/1.2 has become a staple of the major full-frame mirrorless camera platforms from Canon and Nikon. Now, the $2,000 Sony FE 50m f/1.2 GM lens has joined the party, and it delivers truly exceptional image quality in a relatively compact package.

Camera manufacturers have long used the standard 50mm focal length to show off what they can do with optics, and that’s still the case in the mirrorless era. One noted grumpy camera reviewer once said the ‘60s-era Nikon 55mm f/1.2 existed “to give little men bragging rights decades ago when little men bragged about the speed of their lens as opposed to how many pixels their camera had.”

Now, however, super-high resolution cameras like Sony’s 50-megapixel A1 or the 61-megapixel A7R IV demand a lot from lenses to make the most of all that firepower. Sony crammed three extreme aspherical glass elements inside to help maintain sharpness and illumination throughout the entire frame, even when shooting wide open. The edges and corners typically show significant blur and vignetting with an aperture this wide, but Sony has done an excellent job keeping it under control. Ultimately, the lens is a collection of some of Sony’s best lens tech combined in a way that it captures truly beautiful images.

Like the rest of the GM (short of G Master) lenses, the Sony 50mm f/1.2 GM boasts robust weather sealing meant to handle the abuse that comes from pro photography work. There are two programmable buttons on the lens barrel that you can customize to perform a variety of features–they default to activating the AF system.

Inside, there are four AF motors to drive the internal focusing mechanism. The lens focuses extremely quickly and silently without any of the elements extending past the front of the barrel.

The 50mm f/1.2 GM has a built-in aperture ring, which I love about it. It has two settings. One allows the aperture ring to click into each f number so you’ll know exactly what setting you’re on. You can also disable the click and get a smooth transition up and down the aperture range, which is preferable for video. Neither the Canon nor the Nikon offers an aperture ring at all, which gives the Sony a distinct edge in feel and usability—at least in my book.

If you’re looking to get close to your subject, the 50mm GM achieves a surprisingly short focusing distance of 15.7 inches. That provides relatively high magnification on your subject, which is handy in a prime lens like this. For instance, that comes in handy if you’re a wedding shooter and you want to capture the fine details of the decorations and table arrangements without having to switch over to a true macro lens.

While the close focusing is nice, it’s worth noting just how absurdly shallow the depth of field gets when you get close and shoot wide open. Focused at the minimum distance and opened to f/1.2, you’ll get a band of focus so narrow that it’s barely useful in any situation. This is another situation where a minimum aperture of f/22 would be nice compared to the f/16 this lens offers.

It takes a considerable amount of glass to make a super-fast lens like this one: sharp through the aperture range and at the edges of the frame. The Sony FE 50mm f/1.2 GM contains 14 glass elements in 10 groups, which gives it a total weight of 1.7 pounds. Compare that against Sony’s entry-level 50mm f/1.8, which weighs more than a full pound less at 6.7 ounces.

Sony boasts that it uses its best glass inside the GM lenses, and that’s evident here. As stated above, shooting wide open creates some natural vignetting, but it’s tasteful and easily lessened with software if you don’t like it. Once you get to f/2.8, it largely goes away.

If you want maximum sharpness, I found that roughly f/5.6 will get you the absolute best amount of detail (it only stops down to f/16).

The 11-blade circular aperture contributes to the lens’s extremely pleasant blur characteristics. That’s especially important when you have a lens that opens to f/1.2, where you get a lot of blur. It has a very pleasant transition from in-focus to blurry areas, and out-of-focus highlights render as pleasant spheres most of the time. When shooting wide open, those highlights start to get football shaped near the edges, but that’s expected and pretty much goes away by f/2.8.

Overall the lens is  fast, sharp, and renders colors very accurately. While those are all positive aspects when it comes to a lens, the existence of Sony’s full-frame 50mm f/1.4 Zeiss Planar lens complicates things. While the GM lens does its best to keep the lens quirks under control, the Zeiss embraces them and produces images which have slightly more character. The Zeiss vignettes a little harder and the colors skew slightly dreamier. The Zeiss feels more like a classic lens than a piece of surgical equipment.

I’m admittedly a big fan of the Zeiss Planar lens design in just about all of its forms, but it serves as a quirky touchpoint that makes the perfect GM lens feel a little sterile.

If you’re a working pro who shoots Sony and likes 50mm lenses, then this is almost certainly the one to buy. At $1,999, the Sony 50mm f/1.2 is an expensive chunk of glass, but it’s also somehow $100 cheaper than the Nikon equivalent and $300 cheaper than the Canon. But, its exceptional image quality and burly build make it ideal for pros or shooters who never plan to take the 50mm lens off their body. That’s especially true for those packing cameras like the A1 or the A7R IV, which demand top-tier lens performance to satisfy their high-res sensors.

If you’re not looking to drop $2,000 on a 50mm lens, Sony does offer a few models down the line. I already mentioned the Zeiss 50mm f/1.4 Planar, but at $1,500, that choice really only makes sense if you’re really dedicated to the Zeiss look.

The $250 Sony 50mm f/1.8 is a solid performer, but you lose a lot of pro features, such as the weather sealing, the abundance of aspherical glass inside, and the top-tier coatings. It does stop down to f/22, though, which is one stop beyond the f/16 mark set by the GM lens.

Recently, Sony announced the $600 50mm f/2.5 G lens as well. It packs higher-end G-series optics into a very compact body that weighs just over six ounces. You obviously lose quite a bit of speed–the drop from f/1.2 to f/2.5 is substantial—but, if you’re looking for something small and inconspicuous, it may suit you better than the chunky GM. If you do take the leap on the GM, you can expect it to crank out extremely fine images for a long time.