The Tarantula Nebula will ensnare you in a web of beauty 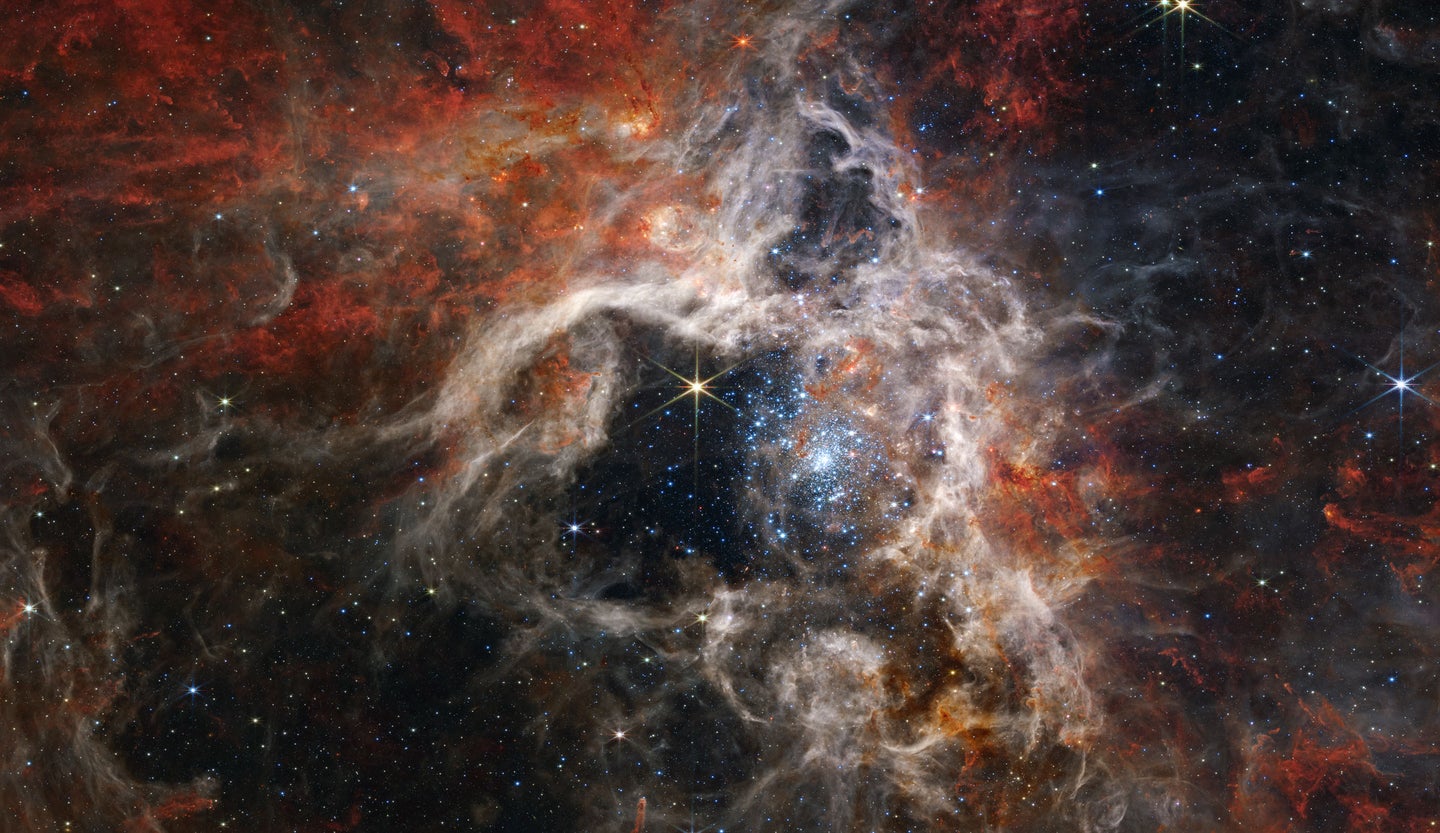 "In this mosaic image stretching 340 light-years across, Webb’s Near-Infrared Camera (NIRCam) displays the Tarantula Nebula star-forming region in a new light, including tens of thousands of never-before-seen young stars that were previously shrouded in cosmic dust. The most active region appears to sparkle with massive young stars, appearing pale blue. Scattered among them are still-embedded stars, appearing red, yet to emerge from the dusty cocoon of the nebula. NIRCam is able to detect these dust-enshrouded stars thanks to its unprecedented resolution at near-infrared wavelengths". IMAGE: NASA, ESA, CSA, STScI, Webb ERO Production Team
SHARE

Patches of stardust. The gleam of distant galaxies. Gaseous swirls in colors rich enough to paint a renaissance tableau. In the James Webb Space Telescope’s (JWST) latest image drop, we get a peek at the Tarantula Nebula as never seen before, and the images are mesmerizing.

Related: Webb photographs what may be the universe’s oldest galaxy

About the Tarantula Nebula

Formally known as 30 Doradus, the Tarantula Nebula is a frequent object of study for astronomers focused on star formation. At 161,000 light-years away, it is located in the Large Magellanic Cloud galaxy. The name alludes not to the spider itself but rather to its resemblance to the silk-lined burrow.

The region is home to plenty of young and still-forming stars, many of which the JWST has just revealed for the first time. The JWST team notes that the Tarantula Nebula is the largest, brightest star-forming region in the Local Group, which consists of the Milky Way’s closest neighbors. The hottest, largest stars known exist here.

“A range of Webb’s high-resolution infrared instruments, working together, reveal the stars, structure, and composition of the nebula with a level of detail not previously possible,” the JWST website shares. “Astronomers will use Webb throughout its mission to gain insight into star formation and the stellar life cycle, the implications of which extend to our own star, the Sun, as well as the formation of the heavy chemical elements that are integral to life as we know it.”

What the images of the Tarantula Nebula show

The JWST employed its Near-Infrared Camera (NIRCam) and Mid-Infrared Instrument (MIRI) to capture images of the Tarantula Nebula. Using the NIRCam, the JWST catches an otherwise unseen moment: a young star emerging.

“The nebula’s cavity centered in the NIRCam image has been hollowed out by blistering radiation from a cluster of massive young stars, which sparkle pale blue in the image,” the JWST team explains. “Only the densest surrounding areas of the nebula resist erosion by these stars’ powerful stellar winds, forming pillars that appear to point back toward the cluster. These pillars contain forming protostars, which will eventually emerge from their dusty cocoons and take their turn shaping the nebula.”

What’s so important about the Tarantula Nebula?

30 Doradus is distinct in that it shares a similar chemical composition with early gigantic star-forming regions at the beginning of the cosmos. The Milky Way doesn’t see star production at nearly the same rate as the Tarantula Nebula, and the chemical makeup isn’t similar, either. 30 Doradus is a fine example of what it would have been like way back when.

“Webb will provide astronomers the opportunity to compare and contrast observations of star formation in the Tarantula Nebula with the telescope’s deep observations of distant galaxies from the actual era of cosmic noon,” JWST notes.