Two years after the WG-70's debut, the company's latest ruggedized model is nearly identical to that camera in all but a couple of ways. 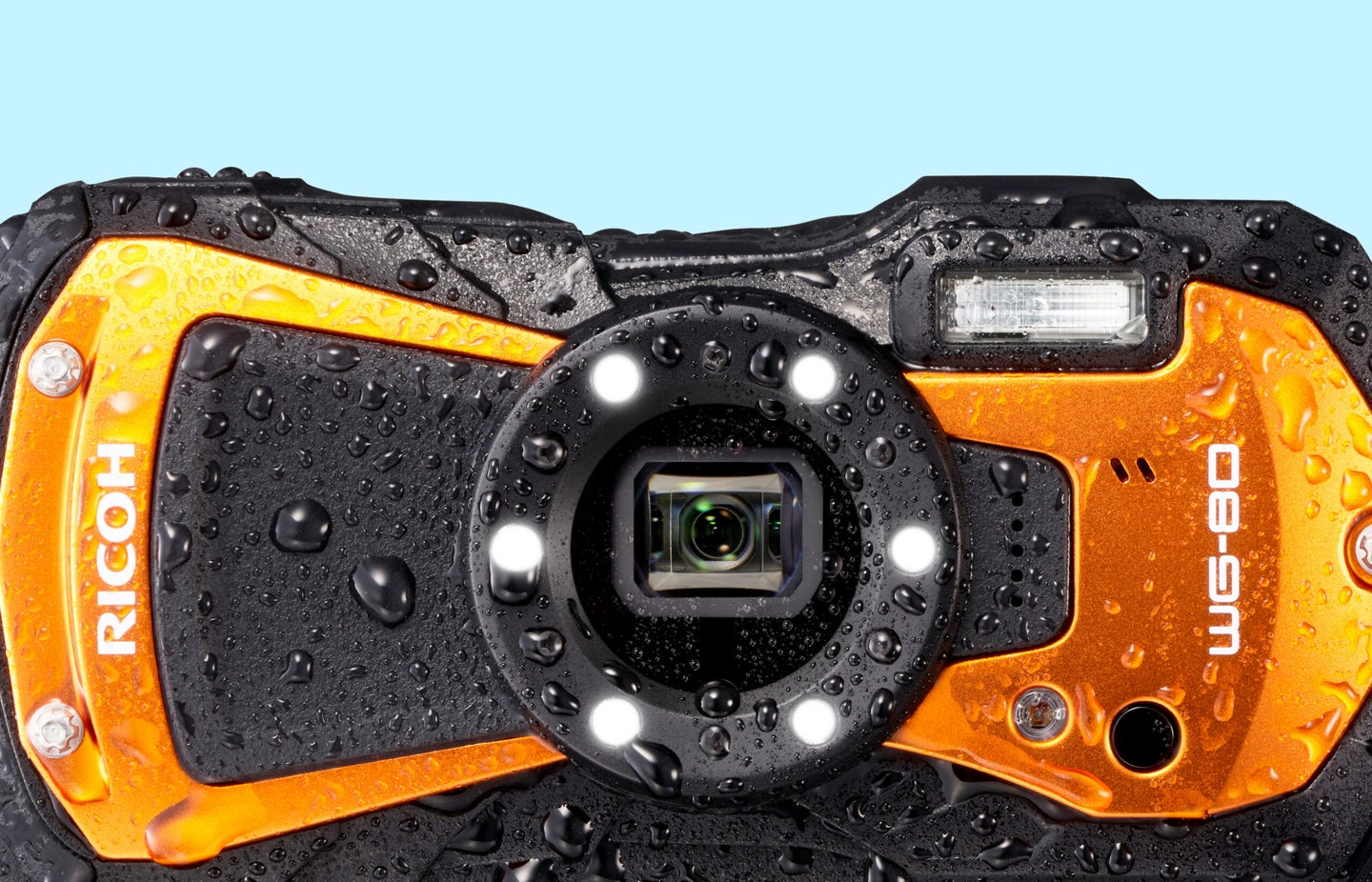 The macro lights around the lens of the new WG-80 are now twice as bright as the previous generation, and can be adjusted in 5-step increments. Ricoh
SHARE

Ricoh has unveiled its latest all-weather WG-series adventure camera, the Ricoh WG-80. The new model will be instantly familiar if you’ve shot with any of the company’s earlier rugged compacts, as the basic design is still very similar to that laid down with the original Pentax WG-1 all the way back in 2011. Save for cleaner, less fussy trim panels covering the front and encircling the macro lights, the exterior is basically identical to 2014’s WG-30 and the weight is also indistinguishable.

So what’s new since the previous generation? The sole changes of note can be found in the aforementioned macro lights, which also double as both a self-timer indicator and a clever way of ensuring you’re pointing the camera the right way when shooting selfies.

The individual LEDs are now twice as bright as in the previous generation, and their brightness can now be set in five steps. (The previous model only had a single brightness level.)

The same tank-like build and imaging pipeline as before

In all other respects, the WG-80 appears to be identical to its predecessor. It’s still based around a 16-megapixel, 1/2.3-inch backside-illuminated CMOS sensor paired with a 28-140mm equivalent (5x zoom) lens with an f/3.5-5.5 maximum aperture across the zoom range. As before, focusing is possible as close as just 0.4 inches.

It’s also just as durable as ever. Ricoh says it can withstand immersion to a depth of 46 feet for two hours, can survive drops from 5.2 feet or being crushed by up to 220lbf, and works in temperatures as low as 14 degrees Fahrenheit.

And as far as we can see, the remainder of the camera is also unchanged.

Sensitivity still spans a range from ISO 125 to 6400, and shutter speeds from four to 1/4000 seconds are possible. The lens remains unstabilized, with only electronic stabilization available for both stills and video.

Around the back, there’s still a rather modest 2.7-inch LCD monitor with 230k-dot resolution, and the WG-80 continues to store its images and movies on an SD card or in a tiny 68MB of built-in memory. A rechargeable lithium-ion battery pack gives sufficient charge for around 300 shots or 260 minutes of playback, according to CIPA testing standards.

Available from mid-June 2022 in black or orange body colors, the Ricoh WG-80 will be priced at $329.95. That’s a premium of some $50 over the launch price of the previous generation, an increase that likely reflects the realities of both inflation and recent supply chain issues affecting the industry as a whole.

If you’re considering the WG-80 and don’t need its macro lights, though, current street pricing of ~$250 will also make the WG-70 a tempting option, while stock remains.