Move over Saturn, Neptune's got some glimmering spirals of its own to flaunt. 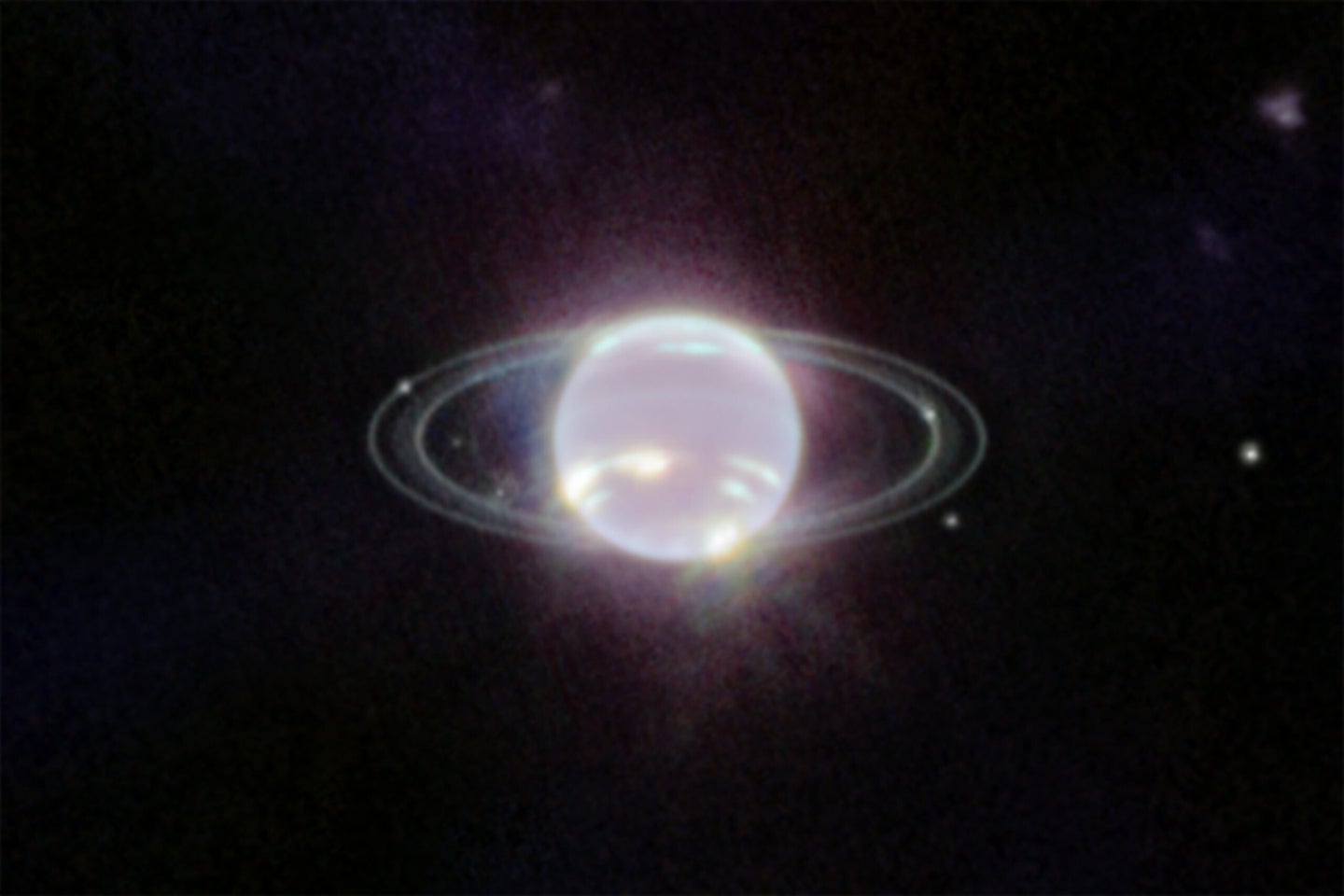 When you think of planets with rings, Saturn normally takes the cake for its iconic icy spirals. But, Saturn isn’t the only planet in our solar system that the universe put a ring on. As a matter of fact, the James Webb Space Telescope (JWST) just capture the clearest view of Neptune’s rings in over 30 years.

A fresh view of Neptune’s rings

“It has been three decades since we last saw these faint, dusty rings, and this is the first time we’ve seen them in the infrared,” said Heidi Hammel, a Neptune system expert and interdisciplinary scientist for Webb, in a press release.

In 1989, NASA’s Voyager 2 became the first spacecraft to observe Neptune during its late 80’s flyby. Now, JWST has taken this crisp image of the planet’s rings—some of which have not been detected since that mission over three decades ago. The photo clearly shows Neptune’s finer bands of dust, in addition to the bright and narrow rings.

Neptune is an ice giant due to the chemical makeup of the planet’s interior. When compared with the solar system’s gas giants (Jupiter and the more famously ringed Saturn), Neptune is much richer in elements that are heavier than hydrogen and helium.

JWST’s Near-Infrared Camera (NIRCam) can see space objects on a different light spectrum called the near-infrared range. This means that Neptune doesn’t appear blue in the pictures the NIRCam takes. “The planet’s methane gas so strongly absorbs red and infrared light that the planet is quite dark at these near-infrared wavelengths, except where high-altitude clouds are present,” according to NASA. These methane-ice clouds show up as bright streaks and spots, which reflect sunlight before begin absorbed by the methane gas. The Hubble Space Telescope and the W.M. Keck Observatory have also recorded these rapidly changing cloud features.

Astronomers suspect that the thin line of brightness circling the planet’s equator could be a sign that there is atmospheric circulation that fuels Neptune’s winds and storms. It glows at infrared wavelengths more than the surrounding cooler gases because the atmosphere drops down and warms at Neptune’s equator.

It takes Neptune 164 Earth years to orbit the sun, so its northern pole is just out of view for astronomers. However, the JWST images show a possible brightness up there. JWST can see a previously-known vortex at Neptune’s southern pole, but a continuous band of high-latitude clouds surrounding it was revealed for the first time in these images.

The 14 moons of Neptune

JWST also captured pictures of seven of Neptune’s 14 known moons (Galatea, Naiad, Thalassa, Despina, Proteus, Larissa, and Triton). Neptune’s large and “unusual” moon Triton dominates this portrait of the planet, creating a point with diffraction spikes that make it look like a star. Triton is covered in a frozen sheen of condensed nitrogen and it reflects 70 percent of the sunlight that hits it. It is much brighter than Neptune in this image because the planet’s atmosphere is darkened by methane absorption when seen at these near-infrared wavelengths. Since Triton orbits Neptune in an unusual retrograde orbit (aka backward), astronomers believe that this moon may have originally been a Kuiper belt object that Neptune used its gravity to capture. Studies of both Triton and Neptune by JWST are planned for the coming year.

Since the first documented discovery of Neptune in 1846, Neptune has long fascinated scientists. Compared to Earth, it’s 30 times farther from the sun. It orbits in the remote, dark region of the outer solar system, where the sun is so small and faint that high noon on Neptune is similar to a dim twilight on Earth.