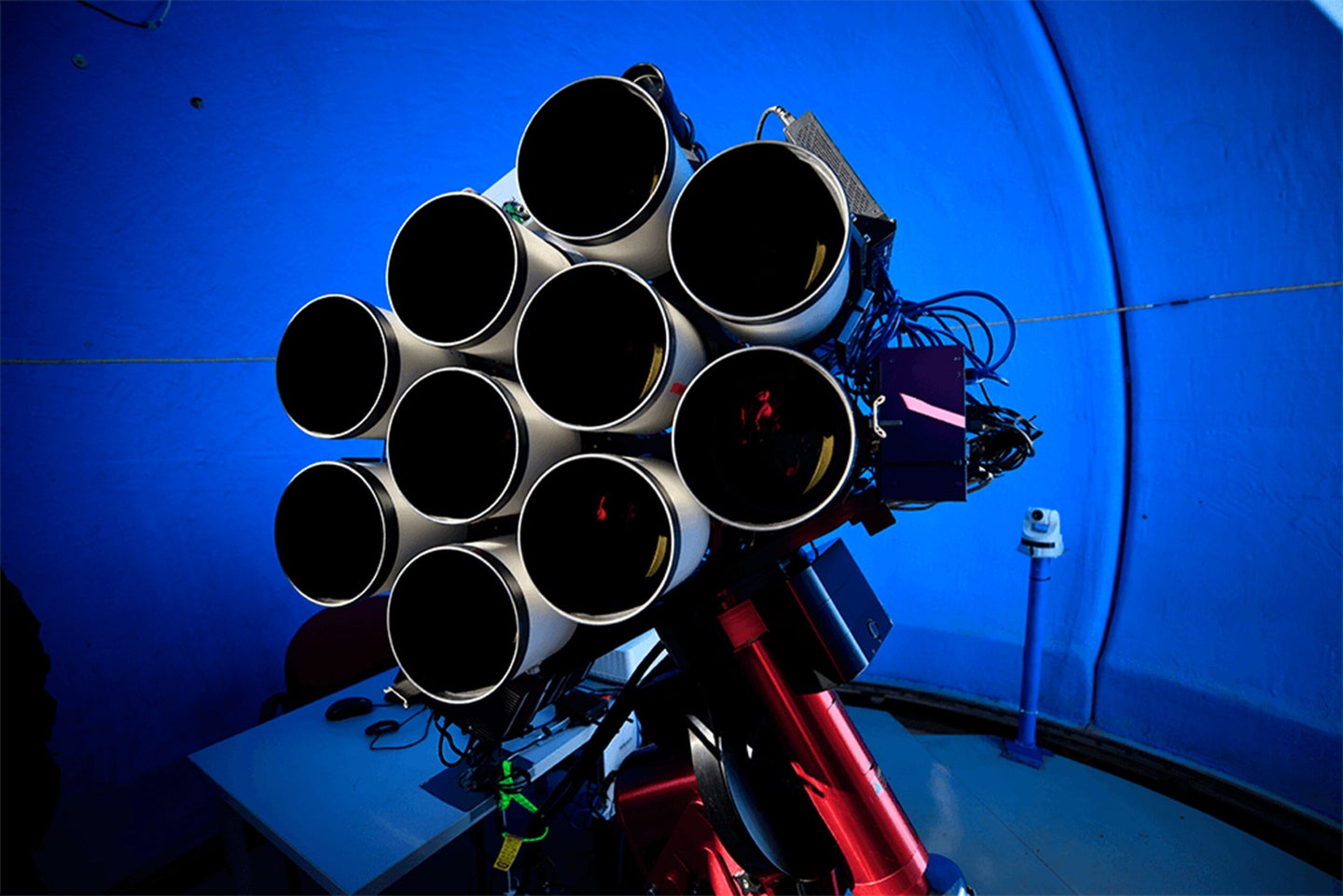 Last week, Macquarie University, Sydney, and Canon Australia unveiled the Huntsman Telescope. Like the Dragonfly Array in the USA which inspired it, it is composed of off-the-shelf Canon EF 400mm f/2.8L telephoto lenses. It’s the first of its kind in the Southern Hemisphere and will “study ultra-faint galaxies and astronomical objects in the Southern Sky.”

About the Huntsman Telescope

The Huntsman Telescope is located at the Siding Spring Observatory on the edge of the Warrumbungle National Park, near Coonabarabran, New South Wales (roughly a seven-hour drive from Sydney). It’s on Mount Woorat, 3,822 feet above sea level.

The Huntsman Telescope is made from an array of ten commercially available Canon EF 400mm f/2.8 L IS II USM super-telephoto lenses—although, at $6,900 per lens, they’re more commonly used by professional sports and wildlife photographers. Each lens in the array is attached to a “single monolithic wide-field detector” that covers 6 square degrees of the night sky. (For reference, the full moon covers about 0.2 square degrees.)

It’s named after the Huntsman spider (though they only have eight eyes) which is unsurprising given that Australia is packed full of terrifying creepy crawlies. The logo is super cute though.

Having ten 400mm lenses pointing at the same spot in the sky doesn’t allow for more magnification. Instead, all the lenses work together to gather more light and enable the Huntsman to “achieve extremely accurate modelling of the night sky emission and produce ultra-clear renderings of our universe.” In other words, each lens allows it to see a little further into deep space. (That’s why the Dragonfly Array it’s modelled after is now up to 120 lenses!)

Not only are Canon’s lenses readily available, and we assume given Canon’s support, relatively affordable for a large research lab, but they’re also really good. The “patented nano-fabricated” anti-reflective coating in the lenses allows for better images of faint objects than conventional mirror telescopes.

Off-the-shelf camera equipment is surprisingly popular for space missions. As well as the Dragonfly Array, International Space Station astronauts shoot with Nikon gear, and a Pentax 300mm lens was launched as part of a micro-satellite.

What the Huntsman Telescope will study

According to Macquarie University, the Huntsman will “will help answer some outstanding questions in modern astrophysics research,” including:

According to Dr Lee Spitler, the Huntsman’s Principal Investigator, the telescope will be crucial for understanding what could happen if the Milky Way Galaxy had a head-on collision with its nearest neighbour, the Andromeda Galaxy—something that could occur in as little as 4.5 billion years.

“The Huntsman Telescope is pioneering the way in which we view our Southern skies by capturing images of the faintest galaxy structures that conventional telescopes simply couldn’t,” says Dr Spitler. ”The ability to observe the remnants of galaxies colliding with each other and searching for the faintest and smallest galaxies in the universe will help us understand the potential fate of the Milky Way in the far distant future.”