It's not only gorgeous, it also provides us a unique view of Earth's atmosphere, with each color representing a different layer. 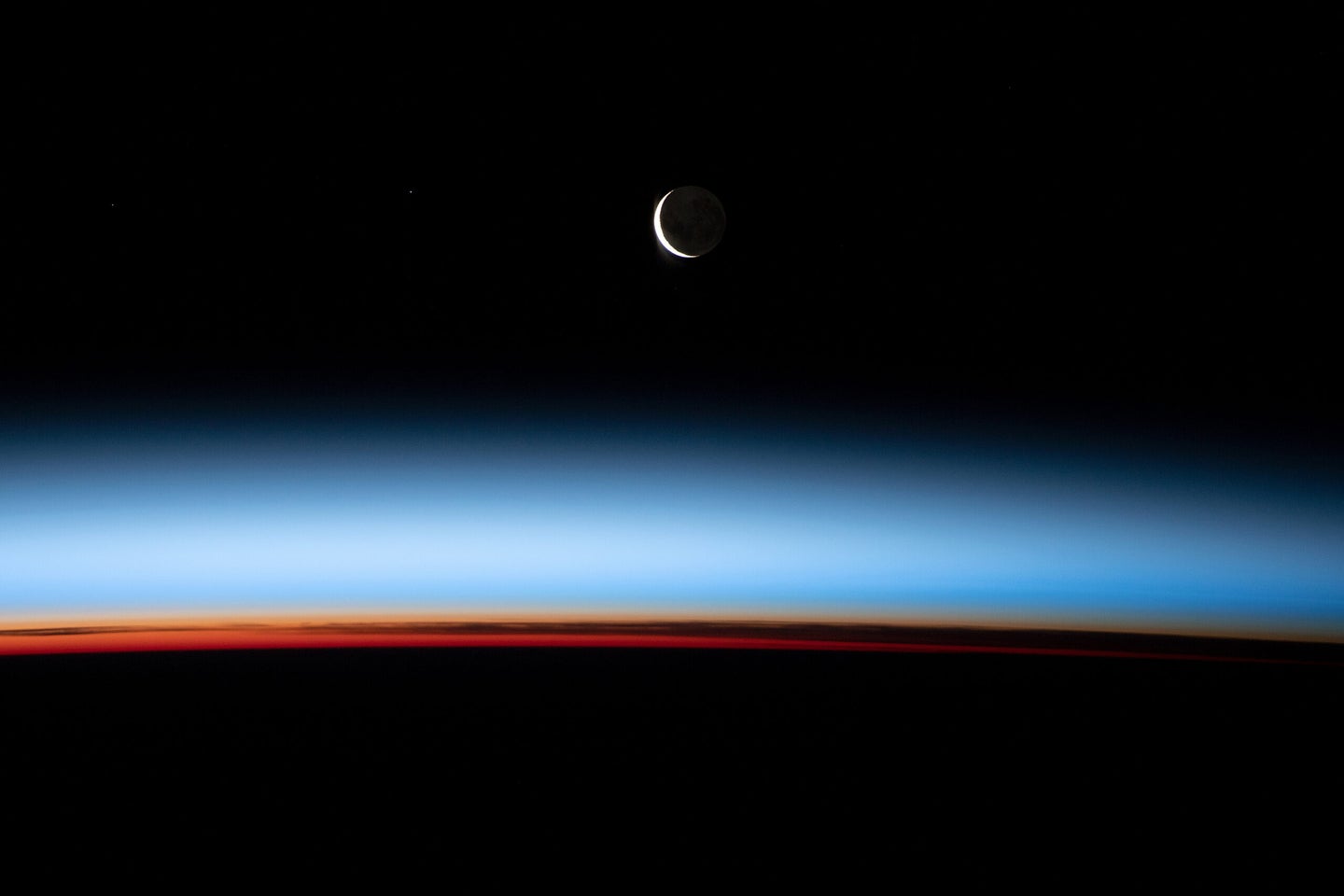 Astronauts on board the International Space Station (ISS) regularly take incredible shots, and one of the latest to be featured by NASA is no exception. This photo of “a crescent moon hovering above an orbital sunset” was posted on New Year’s Eve and, apparently, “offers a symbolic end to the year 2021 and a look toward NASA’s next goal for human-crewed exploration.”

What I love most about many photos from space is how they blend science and art—much like photography does. While the photo of the moon rising above the setting sun is absolutely stunning (come on, look at those colors, and the subtle shadow details in the dark side of the moon!), why it looks like this is also fascinating.

The photo shows an orbital sunset that fades from orange to dark blue between the dark surface of the Earth and “the blackness of space”. Each band of color roughly corresponds to a different layer of the Earth’s atmosphere: the troposphere (up to 6.2 miles), the stratosphere (6.2 miles to about 31 miles), the mesosphere (31 miles to about 53 miles), and the thermosphere (about 53 miles up to somewhere between 311 and 621 miles, depending on solar activity and other factors).

Each layer is a different color because of a phenomenon called Rayleigh scattering, where visible light (and other electromagnetic radiation) is scattered by particles smaller than its wavelength—in this case, the air particles in the layers of the Earth’s atmosphere. The colors we see are the light that gets scattered and, because the composition and density of each layer of the atmosphere is different, each one scatters different amounts of light, and is thus appears to be a different color. (Of course, the transitions between the layers aren’t super hard which is why we get such a lovely gradient.)

How the photo was taken

The photo was taken on December 6, 2021, as the ISS passed over the Pacific Ocean east of New Zealand around 262 miles above the surface of the Earth. There are currently seven astronauts on the station (four from NASA, two from the Russian space agency Roscosmos, and one from the European Space Agency), though we don’t know who pushed the shutter in this case. One thing that always fascinated me about photos from the ISS is how normal the gear used is. This photo was shot with a Nikon D5 and a lens at 200mm, which was probably a Nikon 70-200mm f/2.8E. And while it’s certainly high-end, it’s still the kind of thing many professional photographers use day-to-day down here on Earth. It’s not that the astronauts are using unique gear—they just have a super unique perspective.