Everything you need to know about the new camera and lenses launched during Fujifilm X Summit. 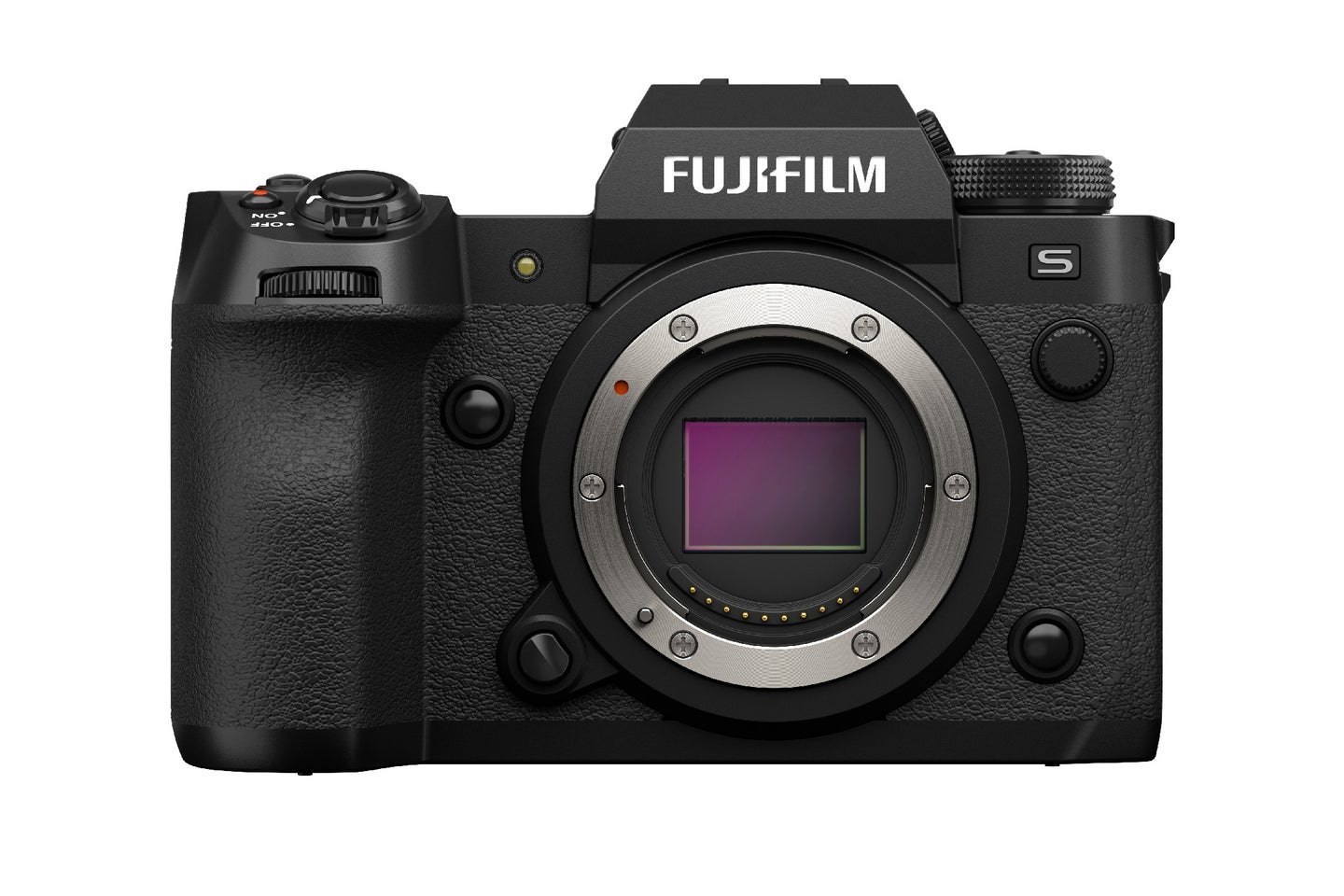 That new sensor paired with a new X-Processor 5 ultimately means less noise at higher ISOs, better fidelity images at lower ISOs, and more powerful subject-detection AF. This is very notably a stacked sensor, which is technology typically reserved for very high-end models like the Sony A1.  The camera features a new five-axis in-body image stabilization system which offers users up to 7 stops of IS. The high-resolution EVF features 5.76-million-dot with a magnification of 0.8x Here’s what else you need to know about the X-H2S.

The X-H2S features a large grip so the camera feels well balanced with larger lenses and a LCD display on the top panel for easy access to check settings. The shutter button has been adjusted to improve operations when it’s half-pressed, and the video record button now functions as a stand alone button for easier operation. The camera has dual memory slots: one for CF express Type B and an SD card slot.

The brand new sensor inside the X-H2S brings some exciting features for Fujifilm photographers. The X-H2S offers black-out free continuous shooting up to 40 frames per second. It can shoot 1000 frames in high-speed burst mode at 30 frames per second when shooting JPEG, or 20 frames per second if shooting RAW. The X-H2S uses an AI processor for improvements in subject detection AF. The new camera can track human faces and eyes, animals (including birds) and objects like cars, motorcycles, bicycles, airplanes and trains.

Video specs on the X-H2S bring internal 10-bit 4:2:2 recording up to 6.2K at 30 fps and 4K at 120 frames per second. The new camera supports professional codecs like Apple ProRes HQ/ Pro Res 422 and Pro Res LT, for increased flexibility in post production. The video recording time has also been extended to 240 minutes. The sensor’s fast readout speed of 1/180 second when shooting video minimizes rolling shutter effects—both with moving subjects and when the camera itself is moving. The X-H2S has a heat dissipating design and an optional cooling fan accessory to keep the camera cool, which allows for longer recording times. The X-H2S is also the first X series camera that can shoot in F-Log2, which offers up to 14 stops of dynamic range and lends to more flexibility in post-production.

The camera’s additional accessories include a dust and moisture resistant vertical battery grip, a wired LAN file transmitter, the previously mentioned cooling fan and a cover kit for protecting the camera’s various terminals.

In addition to the X-2HS Fujifilm also announced two forthcoming lenses and a new lens roadmap at the Fujifilm X Summit.

The new telephoto zoom lens consists of 24 elements in 17 groups, including three extra-low dispersion elements and four Super ED elements. It has a fast autofocus system driven by a linear motor, and when used with one of Fujifilm’s teleconverter accessories, the focal length can be extended up to 1200mm—making this a great choice for wildlife photographers or sports photographers.

It is coated with an HT-EBC coating which is typically found on broadcast lenses to cut down reflectance. The lens has an inner zoom system, which means that the lens barrel maintains the same length regardless of its focal length setting. The barrel of the lens has 19 locations of dust and weather resistance and can operate at temperatures down to 14 degrees Fahrenheit.

It has 5-stop image stabilization, fast and silent autofocus and a focus preset button that allows the lens to remember focus settings for specific locations.

This versatile zoom lens is designed for creators who work in video and stills. It consists of 15 elements in 12 groups, including three aspherical elements and three extra-low dispersion elements to cut down on spherical aberration, distortion and chromatic aberrations. The barrel of the lens is weather-sealed in 13 locations to ensure dust and weather resistance, the lens can operate in temperatures down to 14 degrees Fahrenheit.

It also uses an inner focus system which allows the lens to remain compact and lightweight. The focusing elements are driven by a linear motor for extremely fast focus in as little as 0.02 seconds.

It has a zoom/focus control ring that lets users control zooming or focusing at a variable speed, and a zoom feature that drives the zoom at a constant pace—a tool that video shooters will surely appreciate.

The final bit of news from the Fujifilm X Summit is a new lens roadmap that Fujifilm currently has in development. The new roadmap lenses include the XF56mm F1/2 Lens, the XF30mm F2.8 R Macro Lens and the XF8mm F3.5 Lens. As is typical with lens roadmap announcements there is no pricing estimate at the moment, but Fujifilm expects the 30mm and 56mm lenses to be available late 2022, while the XF8mm lens will be available in early 2023.