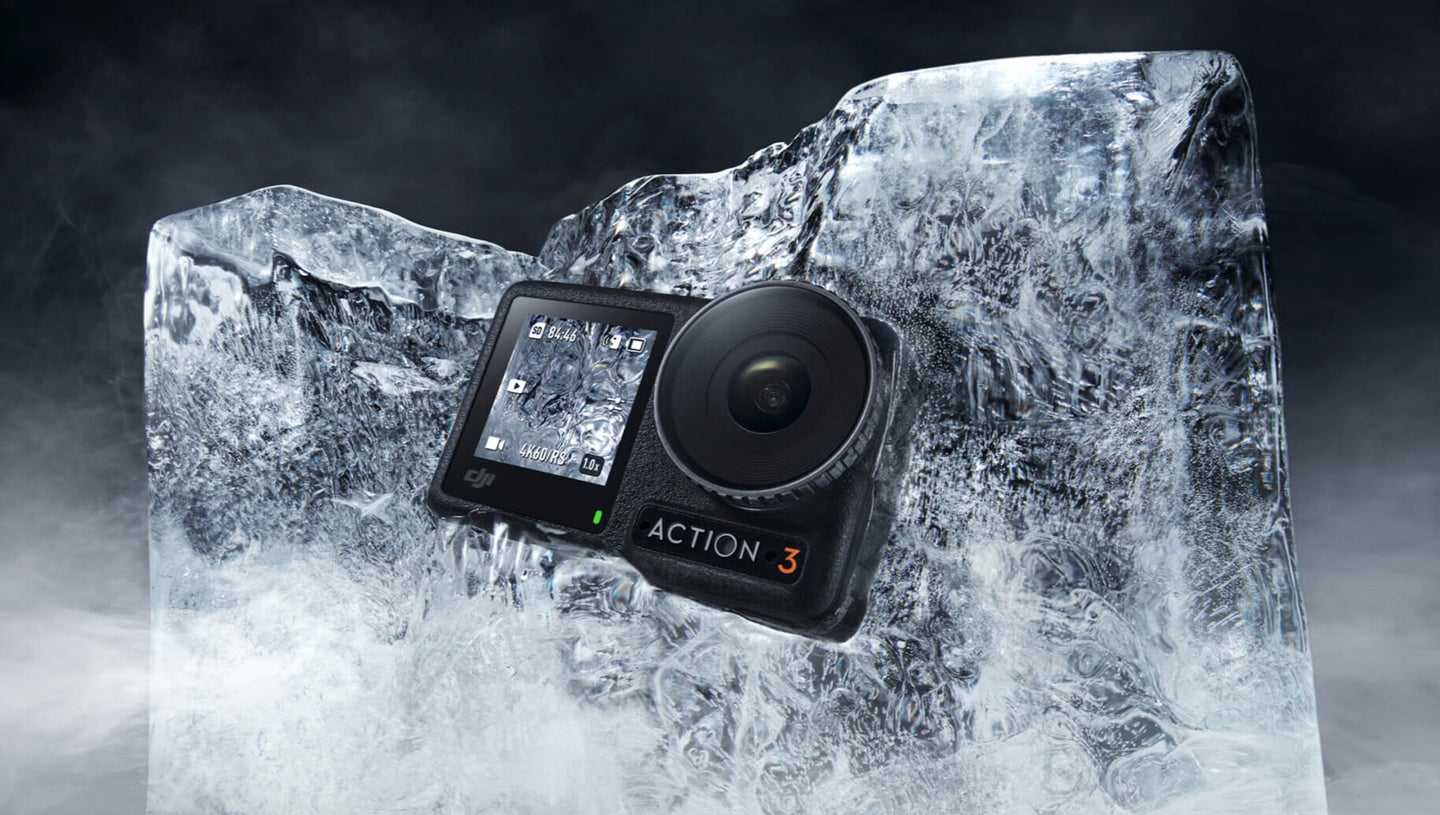 DJI has long been ruler of the skies with its lineup of impressive and user-friendly camera drones. And with the launch of 2019’s Osmo Action, the brand has also been striving to take a piece of the wearable camera market. Now in its third iteration, the DJI Osmo Action 3 is completely redesigned. It sports twin touchscreens and boasts improved battery life, faster charging, and a quicker, more intuitive mounting system. Oh, and it shoots image-stabilized 4K/120p video.

The Osmo Action 3, though a completely redesigned camera, harkens back to the first version of the Osmo Action. Its predecessor—which lacked the Osmo moniker and was simply called the DJI Action 2—had a unique modular design. DJI has done away with that and returned to the classic action cam styling of a little black rectangle.

What is unique about this camera is the dual touch screens without the need for separate modular units. The front features a 1.4-inch, 360×360 pixel screen, and on the back is a 2.25-inch, 640×360 pixel display. Both are touch-enabled for easy camera controls, even when shooting selfies or vlogging. And both also use Gorilla Glass, so you don’t need to worry about them shattering if you take a spill with the camera.

The magnetic quick-release plate is also newly designed with a positioning clip that should stand up to even the worse impacts. It also allows you to connect to a variety of mounts with or without a case. And it supports vertical mounting, making it easy to get footage specific for social media.

The camera utilizes three-mic stereo recording to filter out the wind. Should that not be high enough audio quality for your needs, it also supports DJI microphones via USB-C connections or other microphones through a 3.5mm to USB-C adapter.

The Action 2 was known for its lackluster battery life (60 minutes). So, it is a relief to see that DJI addressed this in the Osmo Action 3 with a 1770mAh “extreme battery,” which promises 160 minutes of extended battery life.

But, perhaps more exciting is the fact that this is the first action camera to support fast charging. You can get an 80% charge in only 18 minutes or a full charge in 50 minutes. That’s excellent when you are on the go and want a quick top-off when you have the option.

The Action 2 was also known to suffer overheating problems, not to mention operational issues in temperatures below freezing. DJI claims to have fixed these in the Osmo Action 3. The camera should be able to record continuously at 4K/60p until the battery is drained without overheating. And it will now function in temperatures as cold as -4 degrees Fahrenheit, a massive improvement.

The camera’s guts have not changed from the Action 2, and it still features a 1/1.7-inch CMOS sensor with 12-megapixel images. The maximum video resolution remains the same as well at 4K/120p. And the lens still offers the same wide, 155-degree field of view or the equivalent of a 12.5mm full-frame lens. That’s wider than GoPro’s 19mm equivalent lens in linear mode or its 16mm fisheye.

With the Osmo Action 3, you get DJI’s latest, greatest image stabilization. “RockSteady 3.0” should help to eliminate shake even when shooting at the max video resolution. Meanwhile, “HorizonSteady” reduces shake and keeps the horizon level even with 360-degree turns, perfect for the likes of surfers or snowboarders (though it maxes out at 2.7K resolution to compensate). In between the two modes is the “HorizonBalancing” option, which corrects tilt up to ±45 degrees and smooths footage up to 4K/60p.

With GoPro such a well-known entity and the Hero 10 Black providing better video specs, why go with DJI’s rendition of an action cam? For starters, the lower price point. The Osmo Action 3 Standard Combo is $329.00, while the Hero 10, which is soon to be outdated, will run you $456.00 at the time of writing.

While the video footage from the Osmo Action 3 isn’t quite up to GoPro standards, the stabilization is. So if you are more concerned with smooth video than epic video quality, this is a good way to save some money. The fast charging and excellent magnetic clip mount are also big ticks in the box for DJI’s offering. And, the wider lens will enable you to capture more, so if documenting vast scenes is your jam, this is the one to go with.

DJI’s Osmo Action 3 is available for preorder now and will be released on October 9. It comes in the Standard Combo for $329, which includes a protective frame, adapter mount, lens protector, and other essentials like battery and charging cable. The Adventure Combo will cost you $439.00 and comes with everything in the Standard Combo, as well as the multifunctional battery case, extra batteries, and a 1.5m extension rod for unlimited adventure.