Previously, scientists were relying on smartphone-quality cameras to study the elusive material that makes up much of the universe. 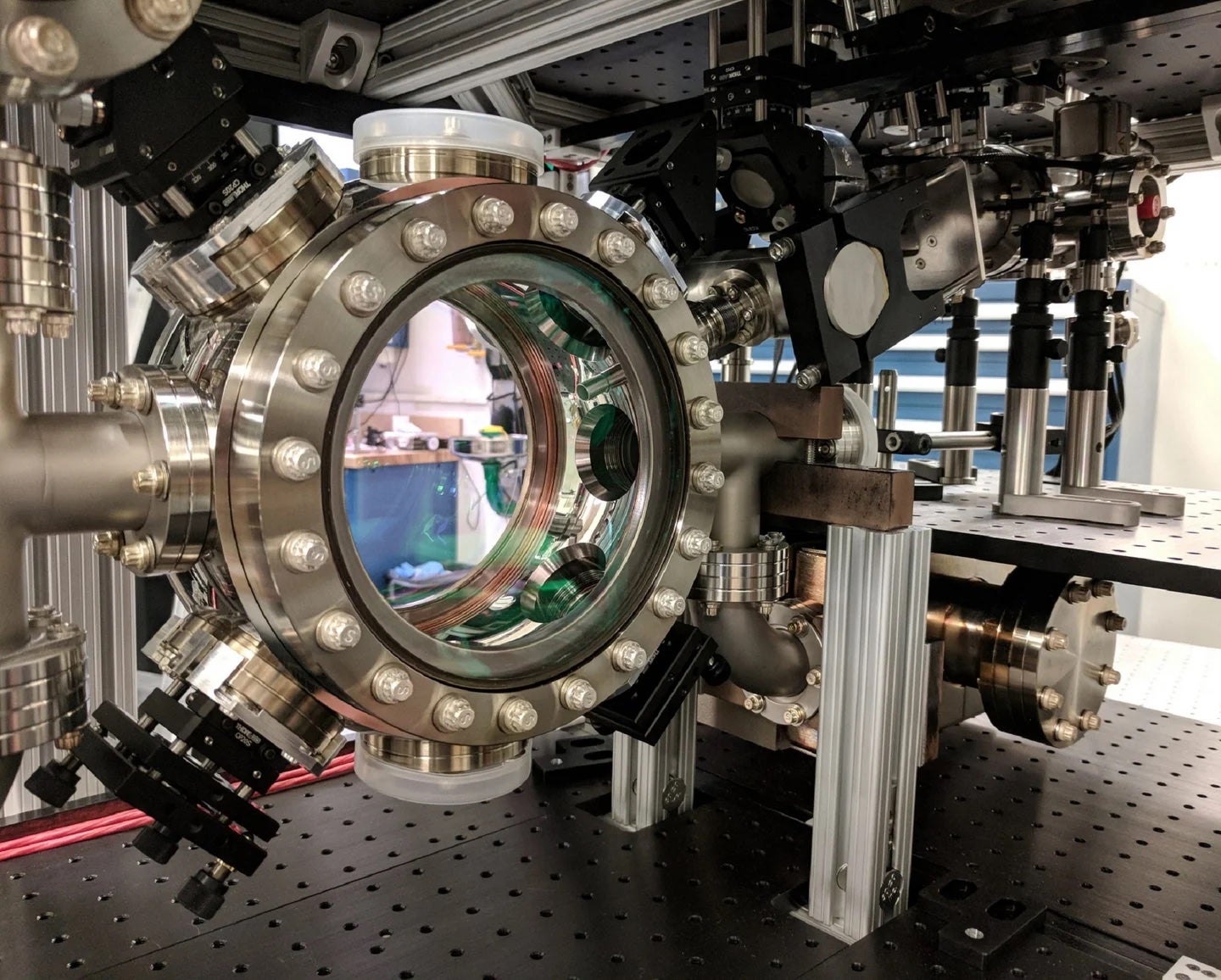 When built, the MAGIS-100 atom interferometer will be the largest in the world. But it's still missing a key component: a detailed camera. Stanford University
SHARE

In suburban Chicago, about 34 miles west of Lake Michigan, sits a hole in the ground that goes about 330 feet straight down. Long ago, scientists had the shaft drilled for a particle physics experiment that’s long vanished from this world. Now, in a few short years, they will reuse the shaft for a new project with the mystical name MAGIS-100.

When MAGIS-100 is complete, physicists plan to use it for detecting hidden treasures: dark matter, the mysterious invisible something that’s thought to make up much of the universe; and gravitational waves, ripples in space-time caused by cosmic shocks like black holes collisions. They hope to find traces of those elusive phenomena by watching the quantum signatures they leave behind on raindrop-sized clouds of strontium atoms.

But actually observing those atoms is trickier than you might expect. To pull off similar experiments, physicists have so far relied on cameras comparable to the ones on a smartphone. And while the technology might work fine for a sunset or a tasty-looking food shot, it limits what physicists can see on the atomic level.

Related: This may be the highest-resolution microscope we’ll ever get

Stanford-developed dark matter camera makes the most of mirrors

Fortunately, some physicists may have an upgrade. A research team from different groups in Stanford, California, has created a unique camera contraption that relies on a dome of mirrors. The extra reflections help them to see what light is entering the lens, and tell what angle a certain patch of light is coming from. That, they hope, will let them peer into an atom cloud like never before.

Your mobile phone camera or DSLR doesn’t care where light travels from: It captures the intensity of the photons and the colors reflected by the wavelengths, little more. For taking photographs of your family, a city skyline, or the Grand Canyon, that’s all well and good. But for studying atoms, it leaves quite a bit to be desired. “You’re throwing away a lot of light,” says Murtaza Safdari, a physics graduate student at Stanford University and one of the creators.

Physicists want to preserve that information because it lets them paint a more complex, 3D picture of the object (or objects) they’re studying. And when it comes to the finicky analyses physicists like to do, the more information they can get in one shot, the quicker and better.

One way to get that information is to set up multiple cameras, allowing them to snap pictures from multiple angles and stitch them together for a more detailed view. That can work great with, say, five cameras. But some physics experiments require such precise measurements that even a thousand cameras might not do the trick.

So, in a Stanford basement, researchers decided to set out on making their own system to get around that problem. “Our thinking…was basically: Can we try and completely capture as much information as we can, and can we preserve directional information?” says Safdari.

Their resulting prototype—made from off-the-shelf and 3D-printed components—looks like a shallow dome, spangled with an array of little mirror-like dots on the inside. The pattern seems to form a fun optical illusion of concentric circles, but it’s carefully calculated to maximize the light striking the camera.

How the dark matter camera works

For the MAGIS-100 project, the subject of the shot—the cloud of strontium atoms—would sit within the dome. A brief light flash from an external laser beam would then scatter off the mirror-dots and through the cloud at a myriad angles. The lens would pick up the resulting reflections, how they’ve interacted with the molecules, and which dots they’ve bounced off.

Then, from that information, machine learning algorithms can piece the three-dimensional structure of the cloud back together. Currently, this reconstruction takes many seconds; in an ideal world, it would take milliseconds, or even less. But, like the algorithms used to trainy self-driving cars to adjust to the surrounding world, researchers think their computer codes’ performance will improve.

While the creators haven’t gotten around to testing the camera on atoms just yet, they did try it out by scanning some suitably sized sample parts: 3D-printed letter-shaped pieces the size of the strontium droplets they intend to use. The photo they took was so clear, they could find defects where the little letters D, O, and E varied from their intended design.

For atom experiments like MAGIS-100, this equipment is distinct from anything else on the market. “The state of the art are just cameras, commercial cameras, and lenses,” says Ariel Schwartzman, a physicist at SLAC National Accelerator Laboratory in California and co-creator of the Stanford setup. They scoured photo-equipment catalogs for something that could see into an atom cloud from multiple angles at once. “Nothing was available,” says Schwartzman.

What’s next for the dark matter camera

Complicating matters is that many experiments require atoms to rest in extremely cold temperatures, barely above absolute zero. This means they require low-light conditions—shining any bright light source for too long could heat them up too fast. Setting a longer exposure time on a camera could help, but it also means sacrificing some of the detail and information needed in the final image. “You are allowing the atom cloud to diffuse,” says Sanha Cheong, a physics graduate student at Stanford University and member of the camera-building crew. The mirror dome, on the other hand, aims to use only a brief laser-flash with an exposure of microseconds.

The creators’ next challenge is to actually place the camera in MAGIS-100, which will take a lot of tinkering to fit the camera to a much larger shaft and in a vacuum. But physicists are hopeful: A camera like this might go a lot further than detecting obscure effects around atoms. Its designers plan to use it for everything from tracking particles in plasma to measuring quality control of small parts in the factory.

“To be able to capture as much light and information in a single shot in the shortest exposure possible—it opens up new doors,” says Cheong.