65,512 Open entries and 4,928 Youth entries have been winnowed down to just ten winners 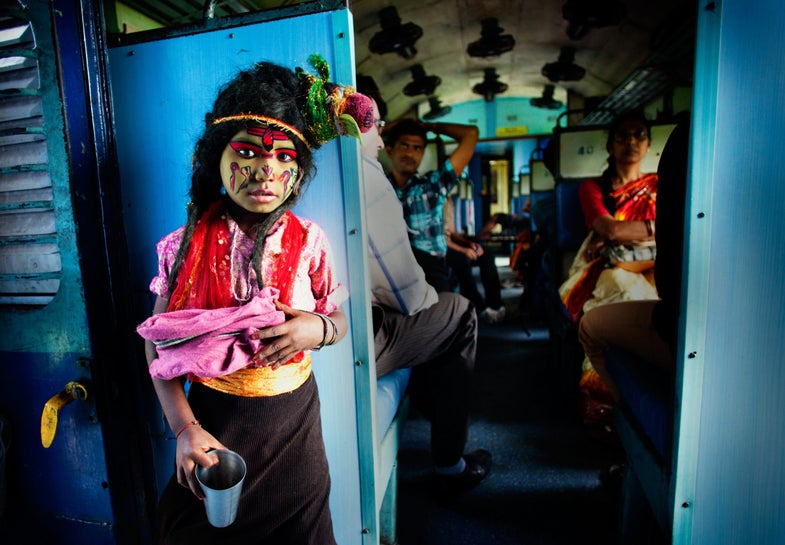 The Sony World Photography Awards have just announced the 2014 winners in the Youth, Open, and National divisions, picking some of the finest photographers in the world out of a field of tens of thousands of entrants. The Open and Youth winners have been given cameras, courtesy of Sony, and all winning images are set to be shown at a gallery show in Somerset House, London.

The Sony World Photography Awards are a multi-stage, and multi-level event, divided into five sections. Alongside today’s news, earlier this year the shortlist for the Professional and Student sections were announced. Now, the overall Professional, Open, Youth and Student winners will be revealed at the 2014 Sony World Photography Awards Gala Ceremony on 30 April in London.

Winners of the Open division received a Sony a6000 interchangeable lens camera, and will now be in the running for a $5,000 prize, and the Overall Open Photographer of the Year title. The Youth winners were given the Sony a5000, and while they will also compete for a top spot, it doesn’t appear they’ll be up for a cash prize as with the other awards.

Conversely, the National award winners were simply picked as the best in the Open division from each of 37 countries, and while a notable honor, it doesn’t carry any prize.

Out of a field of such incredible images, we’re curious: which one is your favorite and why? 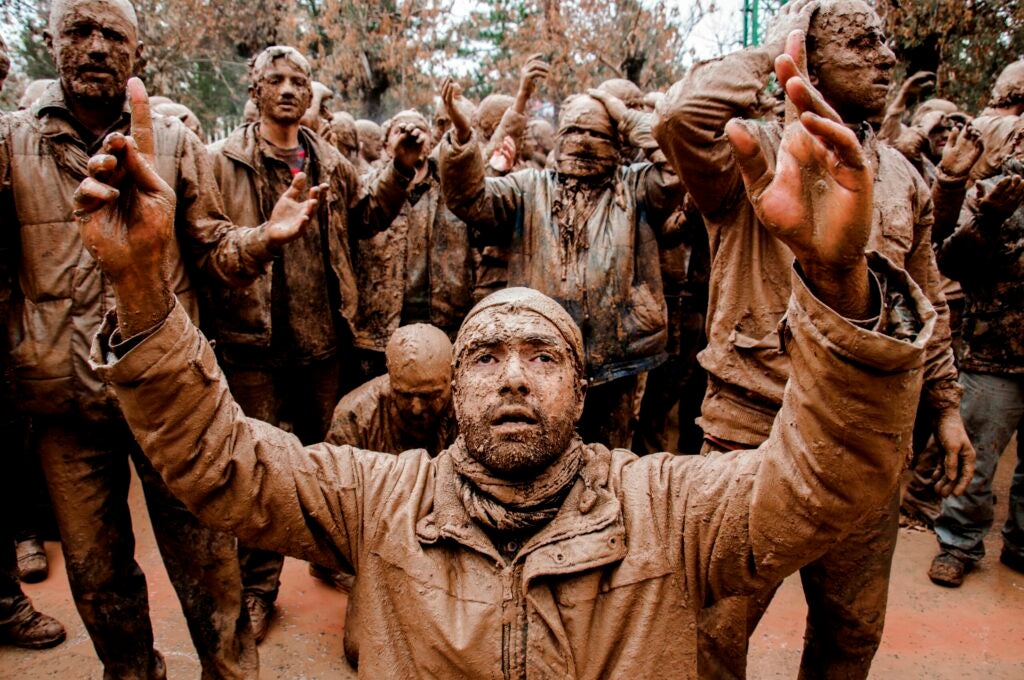 By Bohran Mardani Every year Shiites in the city of Bijar, Iran, hold Imam Hussein mourning ceremonies. Today, this ceremony has become a tourist attraction and people from all over the world come to see the event. This type ceremony can vary greatly in various Shiite cities, but in Bijar it is held on the streets. 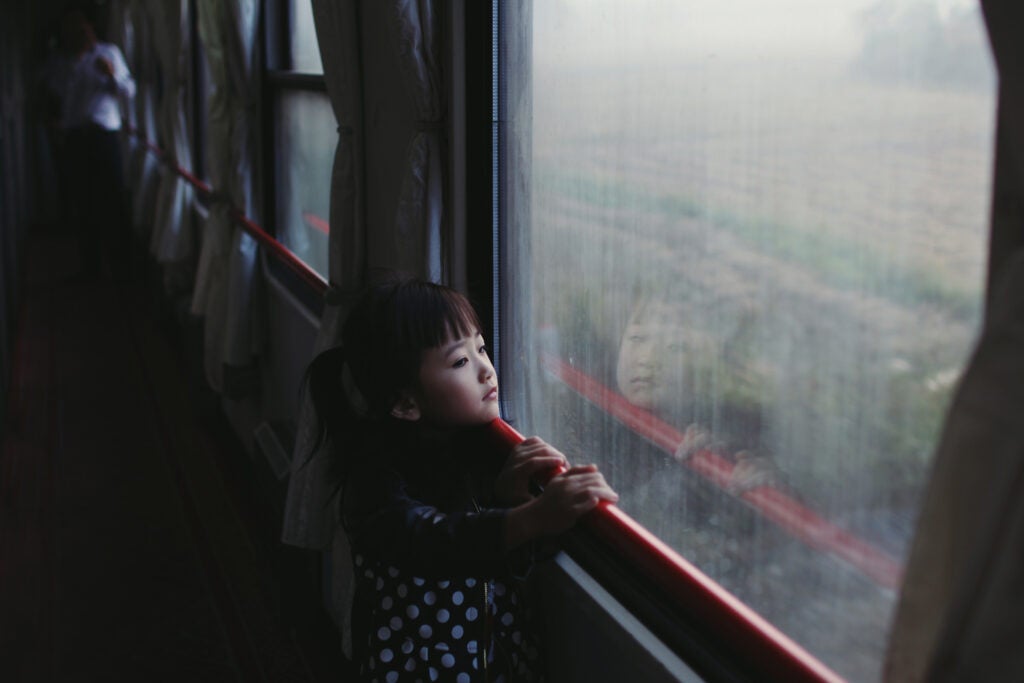 By Paulina Metzscher The photograph was taken during my journey to China in November 2013 with my best friend. During my time in China, I really got into street photography and eventually fell in love with it. The photograph was taken while we were on a night train. We stayed there for 24 hours, so I was in a confined space for a quite limited amount of time. I got up early in the morning to get out and to capture the atmosphere you could find amongst the travelers. And then I found that girl who attracted my attention from the very first moment I saw her. Somehow, she perfectly conveyed a sense of the atmosphere that was present amongst the many travelers on the train. Most of them were waiting eagerly to reach their individual destinations, many of them looking out of the window and watching the world pass by as the train sped through the country. They were completely captivated by the landscape flying by. To me, the little girl stood out from all the other passengers on the train, as in the heat and speed of the moment, she took a minute to herself, completely unaware of everything that was going on around her. She just seemed to be in her own little world, and somehow seemed to have escaped the confined space of the train, even if merely in her thoughts. 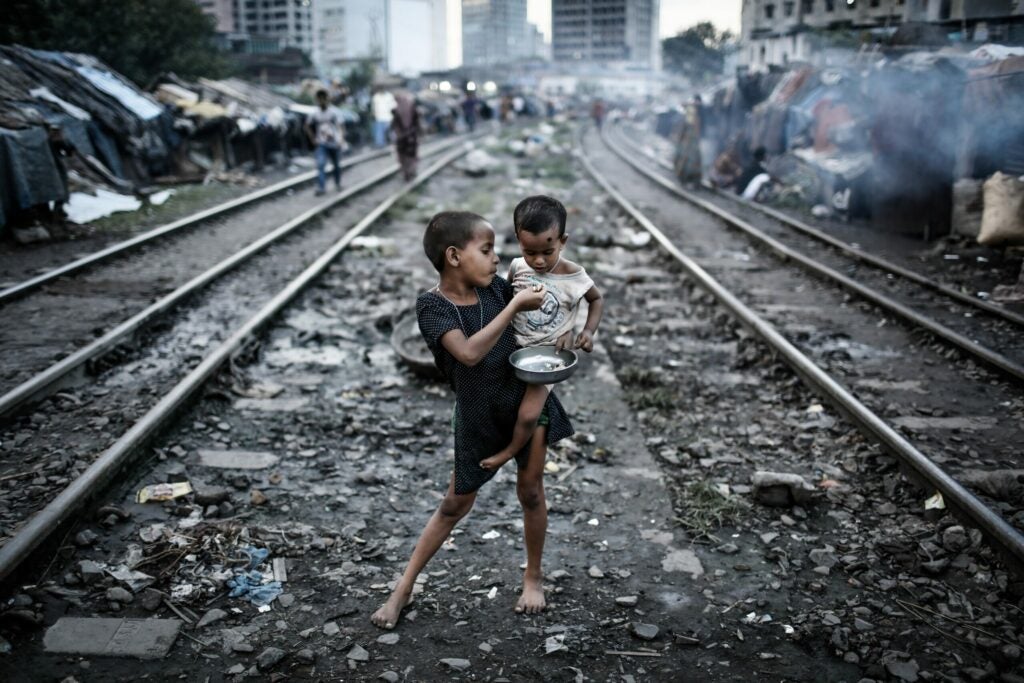 By Bangladesh This photo was taken at Kawranbazar Slum, Dhaka; where people live along with two rail tracks on both of the sides and when there is no train, this rail tracks become their common space. I realized that this place has a lot of visual potential. One day, while returning home after a day long shoot (not having so interesting photos) suddenly I saw, one little girl is feeding a kid standing just right in the middle of the two tracks. At that moment the rail tracks were telling me that this should be my frame and I clicked. This photo fulfilled my thirst for that day. 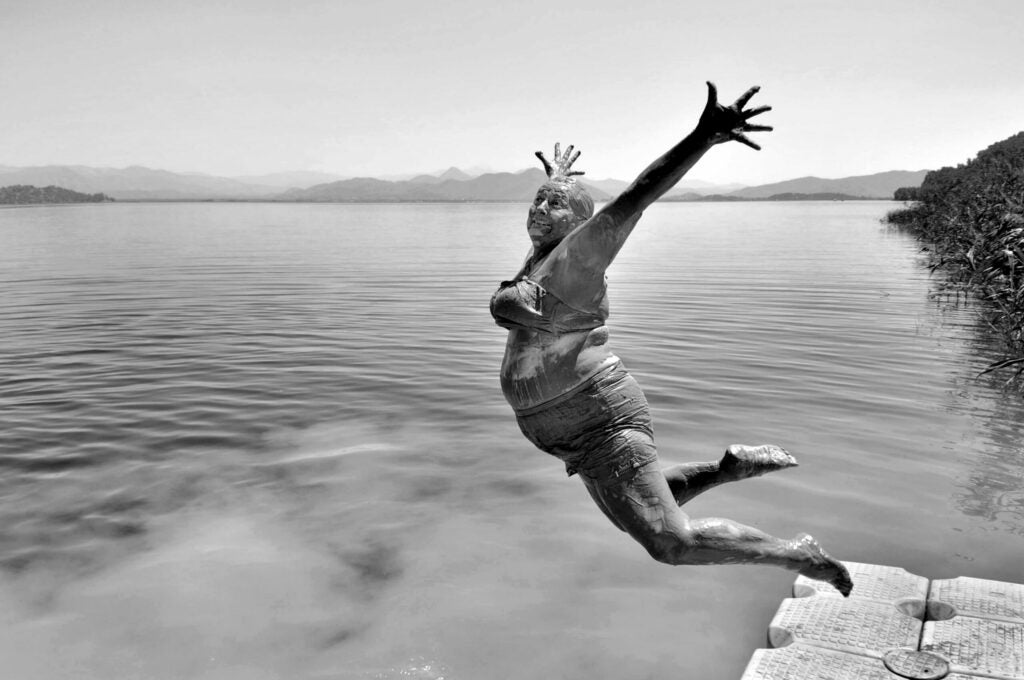 By Alpay Erdem I was in Fethiye Turkey last summer for work. She wanted me to take her photo when she was in the air. I took this image on a fast shutter speed to capture her in the air jumping into the lake after coming out of the mud bath. The result was interesting. With the smile on her face and the way she jumped, she seemed to prove how insignificant her age was. she was the hero of the day. Photo taken in Dalyan – Fethiye 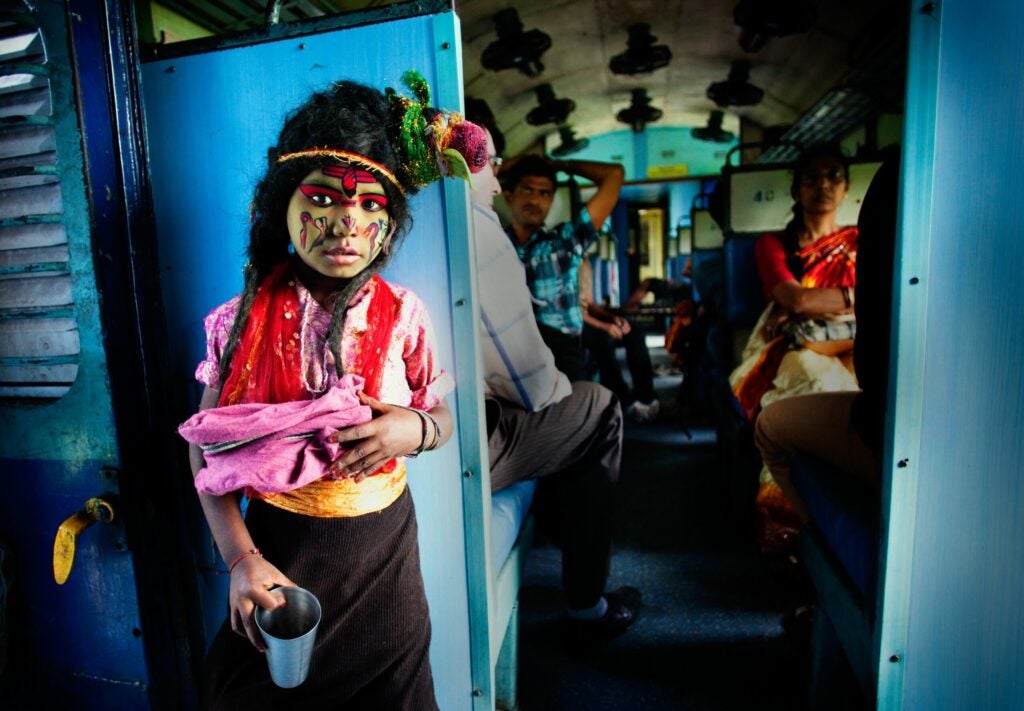 By Arup Ghosh I WAS ON DURGA PUJA FESTIVAL VACATION, TRAVELLING ON A LOCAL TRAIN. A BOY WAS SINGING DEVOTIONAL SONG AND BEGGING FOR ALMS. HE WAS GUISED AS A HINDU GOD, LORD SHIVA. THIS IS A COMMON VIEW IN INDIAN TRAINS. BUT THIS BOY WAS CHARMING, BRIGHT AND DID HAVE A MELODIOUS VOICE. HE COULD NOT EARN ANY MONEY FROM THE COMPARTMENT AND WAS SAD. HE WAS SINGING ALONE, STANDING BY THE DOOR. OUR DESTINATION WAS ARRIVING AND WE APPROACHED THE DOOR. MY CAMERA WAS READY HANGING ON MY NECK, WITH THE 20MM WIDE LENS ATTACHED. I TOOK 3 SHOTS OF THE BOY AND GOT OFF THE TRAIN. BEFORE LEAVING, MY DAUGHTER GAVE HIM AN APPLE AND I GAVE HIM SOME MONEY. THE BOY MOVED TO THE NEXT COMPARTMENT HAPPILY. THESE CHILDREN ARE FROM VERY POOR FAMILY. THEIR PARENTS WORK AS CONTRACT WORKERS ON A VERY POOR DAILY WAGE. THEY WORK DAY LONG IN THE FIELDS. THE CHILDREN SING AND BEG FOR MONEY TO EARN BREAD FOR THE FAMILY, WHEN THEIR PARENTS CANNOT MANAGE A CONTRACT. YET THEY ARE CHEERFUL, HAPPY AND FRIENDLY. 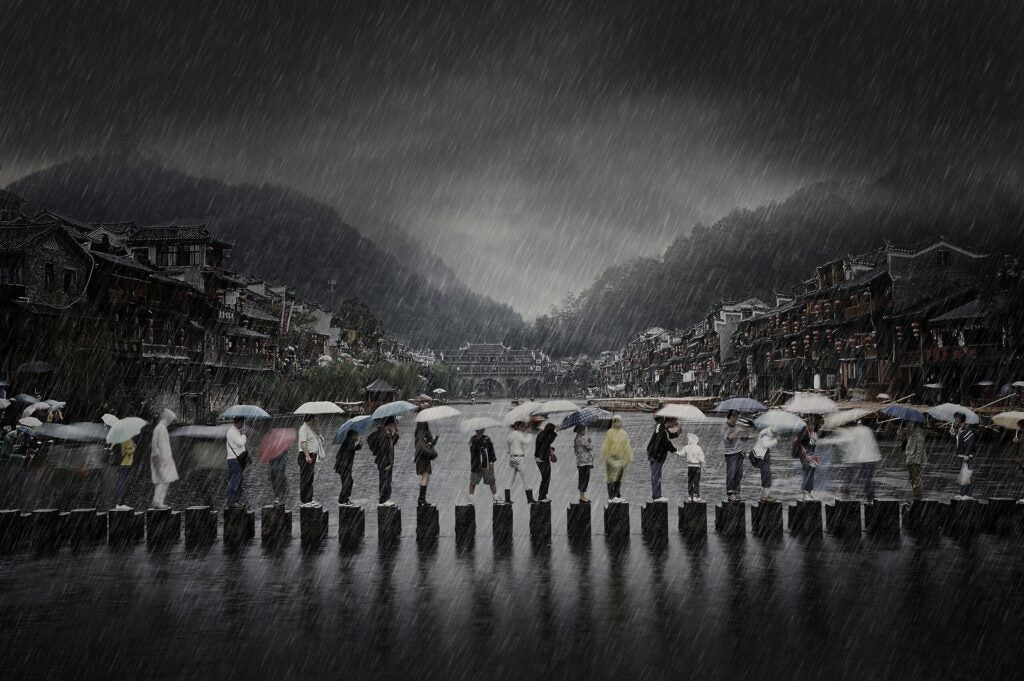 By Li Chen My photo “Rain in Ancient Town” was shot in southern China- phoenix Town, which shows the scene of people traveling in the rain during the rainy season. Tripod was used for this picture and I used slow shutter on purpose to combine the static and dynamic status of tourists. On the background there are old residential buildings and an old stone bridge, this combination enabled a more spiritual atmosphere for the photo. 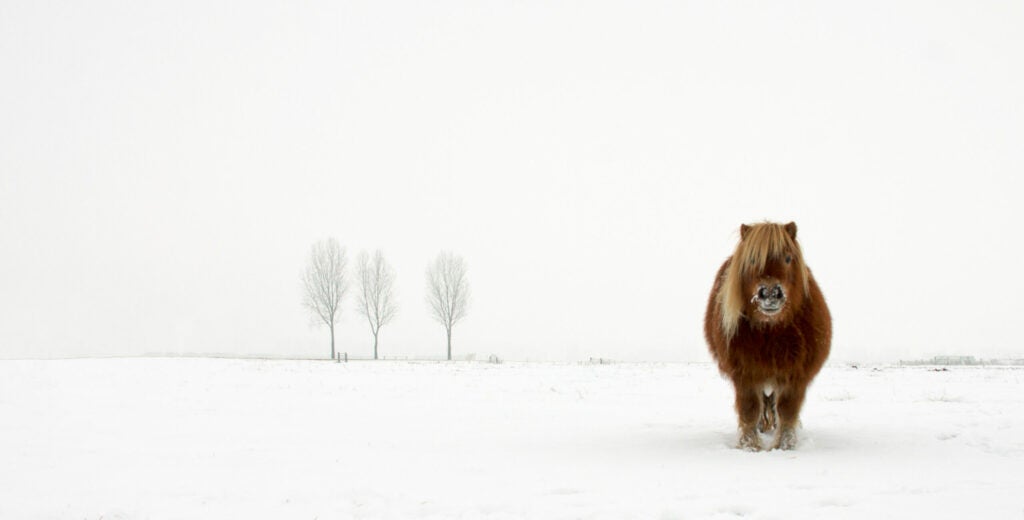 By Gert van den Bosch It was very cold that day, so the inspiration for the title was easy. I had very cold feet. I came out of my car for a quick shot in the snow. The country lanes were slippery. I walked through the cold snow to get to the Pony. When I got there I realized that I had the wrong lens on my camera for the effect that I wanted. So I went back, changed lenses and made the picture me, and came closer than wanted. Normally I have my photo bag on my back. Not this day because I wanted to go for a hit and run shot…. I went back and changed lenses. I came home with this picture. Somehow I can still feel the cold, and the scene is arctic. In my imagination. I took advice to size it this way. 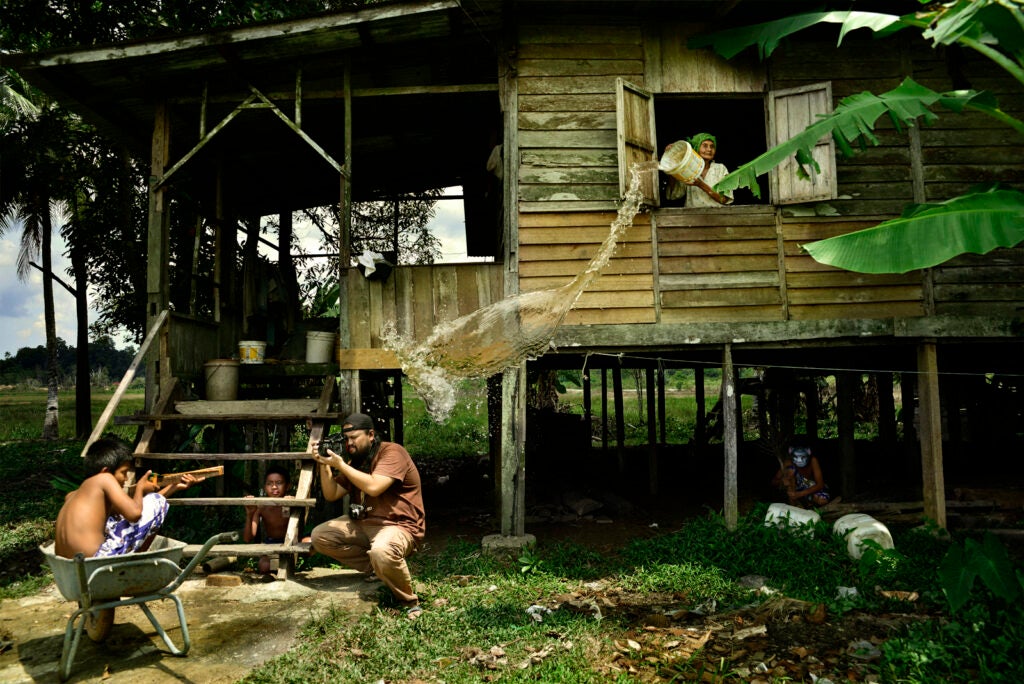 By Airul Azizi Harun Being a photographer is not easy, people may not know the many challenges that photographers had to face to attain the perfect image. Sometimes the story behind the image is much more interesting than what is seen in the picture. It our job as a photographer to convey the story and breath life to that image. Captured in a village in Kuantan, Pahang. Malaysia. The image was captured in high shutter speed and using available light only. This photo narrates the pains and gains of being a photographer, the heritage of an old house, forgotten traditional games and the old generations meeting the new which complimented each other very well. 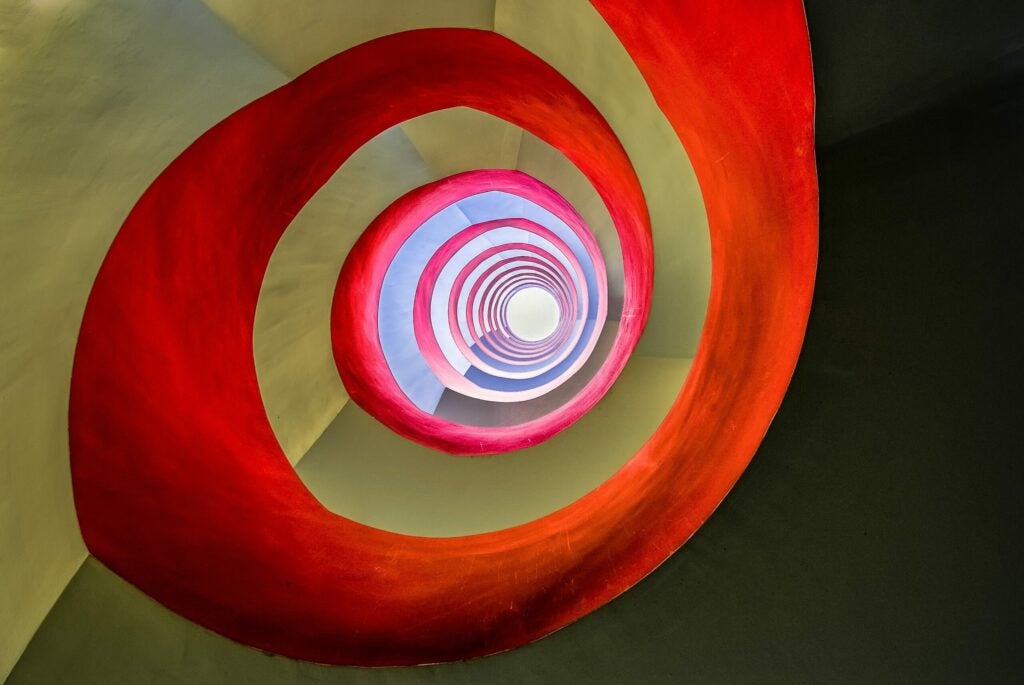 Holger Schmidtke I’ve seen similar images of staircases and so I try to do it my way. In a Office-Building in Cologne I went down to the Zero-Ground of the staircase. I spread my tripod to get a near bottom position and fixed it in the middle of this motif. With the wide-angle 10 – 24mm lens I took some Raw-Photos. The image ” under the Staircase ” is one of them developed with LightRoom.

By Ivan Pedretti It’s a stitched panorama of 12 horizontal shots, 2 rows, each shot is a long exposure with tripod at 30 seconds shutter speed, f2.8 aperture and iso 3200 on canon 50D and tokina 11-16 2.8. I was about 4 am in the night of April 2013 for capturing the milky way arch form south to north in the lighthouse in Capo Spartivento, south Sardinia. The main difficulty was the right to overlap the shots, also another problem was the bright rays of the lighthouse, I was about 20m away, and I had to cover the lens at the time of the passage of the beam to avoid excessive overexposure, so I timed rotation times of the light beam consists offour rays and this process was repeated at least 6 times within 30 seconds of exposure and for 12shots. I was fascinated by the landscape I saw in south coast of my island, the lighthouse made everything special. 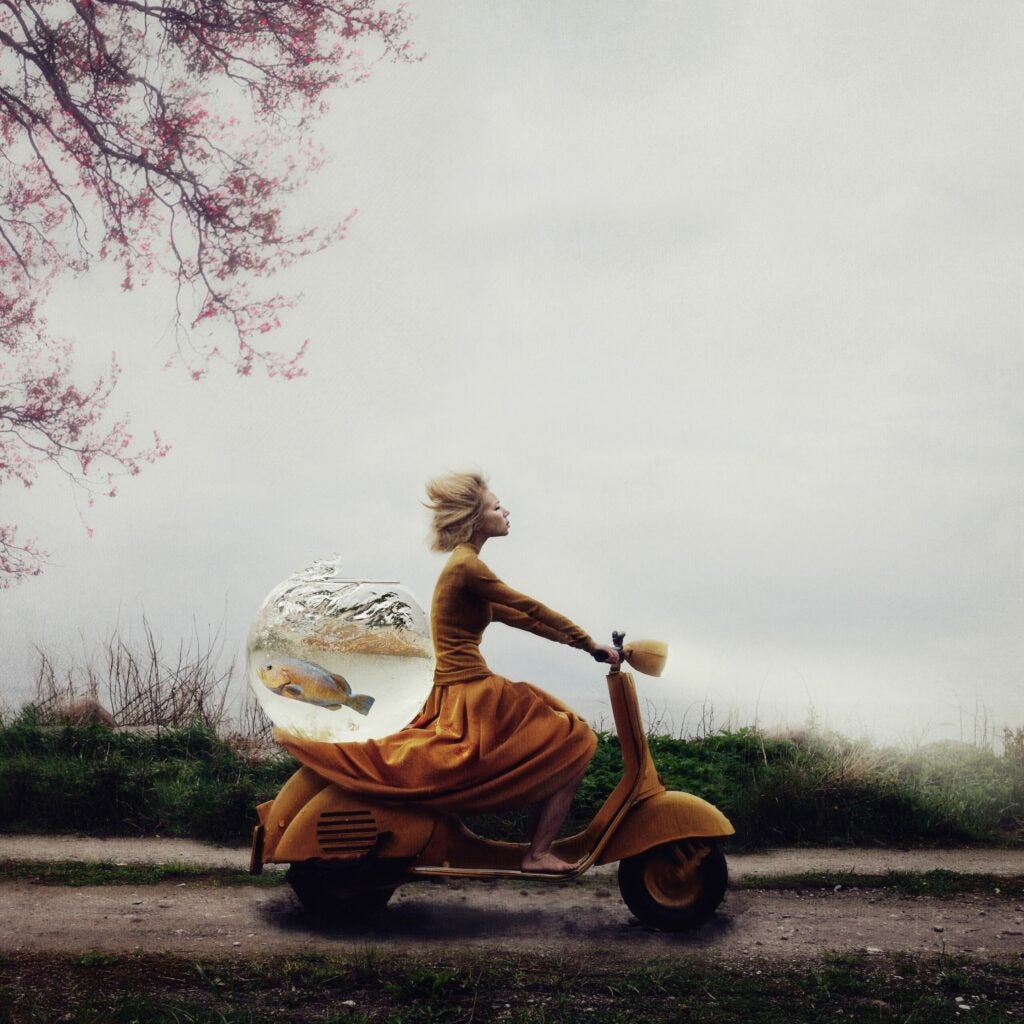 By Kylli Sparre This image took me few months to complete. It started from an idea, a clear vision. It is a daydream about a getaway or resque, a story with an open ending. I would like to leave the final interpretation to the viewer. Technically I didn´t really know how to accomlish an image like this, so I ended up doing some experiments that did not turn out good. After some trial and error I decided to just let this idea wait a bit, I collected the props, found a suitable location. Finally when I was ready, I took all the photos in the same location and then composited them together in Photoshop. Difficult part was the fish bowl. There was a sea near by and my friend helped me to carry it. The fishbowl got rather heavy when we filled it with water and we almost fell with it on the slippery rocks when trying to carry it up from the shore. Luckily no one got hurt and the fishbowl is still in one piece today. 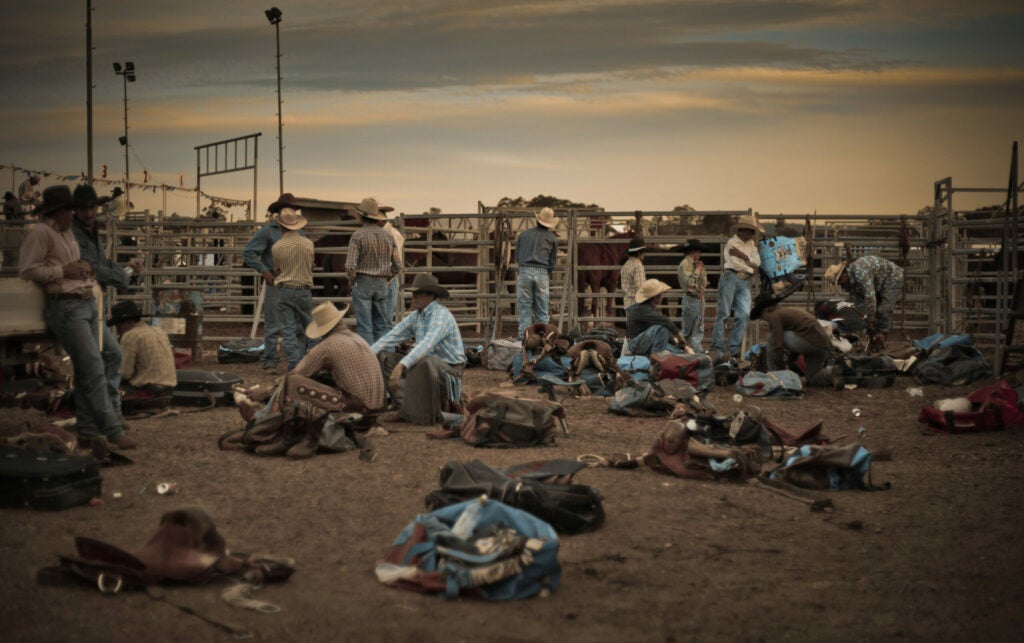 By Valerie Prudon This photo was taken in Branxton, Australia in October 2013. After shooting some of the rodeo itself, I decided to go behind the scene to capture the typical environment of this kind of event. This is when I noticed this group of cowboys having a chat and relaxing. Their specific outfits, their boots, their hats and the horses in the background with the sunset made this photo authentic. This was THE moment and I am glad I took a few seconds to immortalize it. 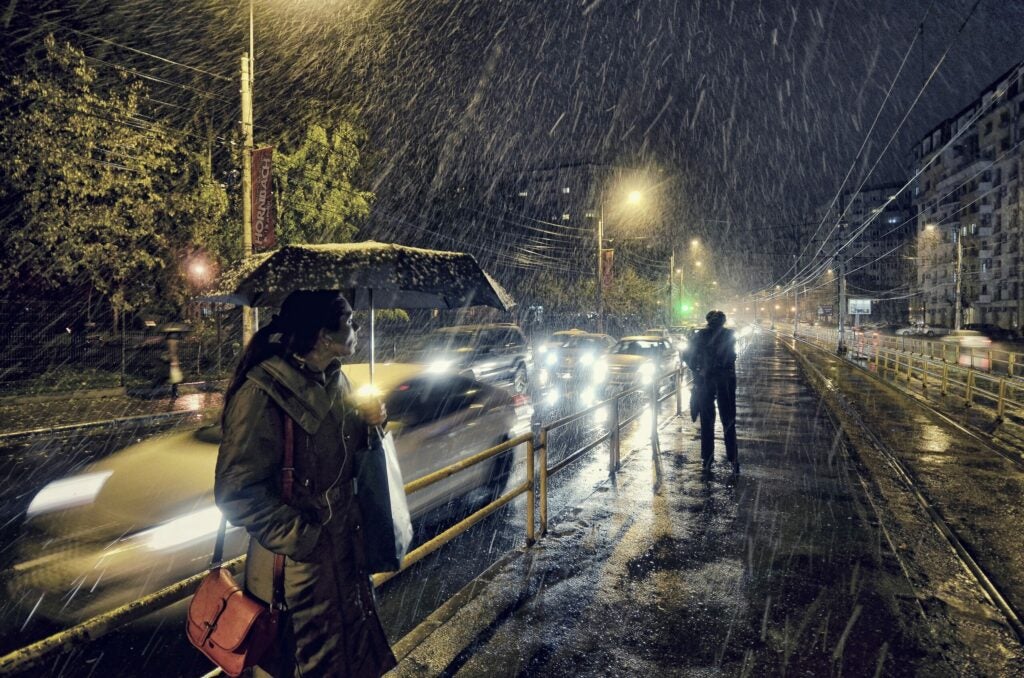 Vlad Eftenie Bucharest, Turda Blvd. , 41 tram station. As the weather got worse in the evening, I hesitated to use the camera before. Before i spotted one interesting situation, with pedestrians walking against car lights, on a zebra. I moved on without taking the photo. Between two tram stations, sleet turned into snow. I went down to the first station and I told myself that I had to take a picture of the situation. Things where changing before me. The flakes had become chaotic as sharp cold wind became annoying. Cars where barely advancing, the light was difficult, the woman with umbrella was standing there petrified. I pulled out the camera and took the picture, handheld, marking the first snow of the year.
Contests
Contests
news
Sony World Photography Awards
travel