How Is The Growing “Capture Everything” Attitude Changing Photography?

Constantly rolling cameras are having a profound effect, not just on our medium, but on the way we experience cultural events 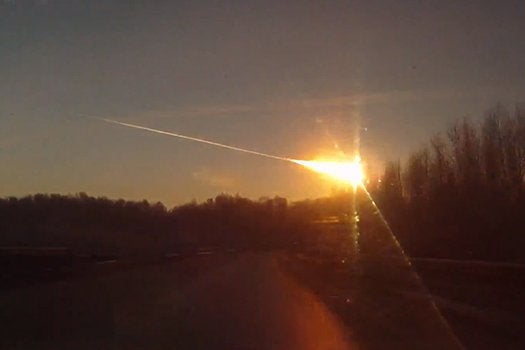 By now, you’ve almost certainly heard about the meteorite that did a low flyby over Russia last night. After streaking across the sky, it exploded in the air, sending shockwaves through the city, injuring 400 people and causing untold damage. In fact, you’ve probably seen video of it. And not just one video, either, but dozens. But why are there so many and is this a good thing?

The answer to the first question is actually pretty simple. In Russia, it’s not unheard of for con artists to jump in front of moving cars or purposely cause accidents in hopes of making a quick buck. In order to combat this practice, many drivers have started using on-board cameras, not unlike a GoPro, to capture their commutes. Many cyclists do the same thing in big cities where unfortunate incidents with motorists are common.

Those car cameras represent a large number of the meteor videos that are currently doing the rounds. Of course, there are plenty of non-car camera videos, too, but many of them start in the middle of the event, making them seem less spectacular in some instances.

We’re in a time right now where images and videos of current events propagate with lightning speed. As soon as images are uploaded to Instagram, you can see comment sections filling up with news editors asking for permission to run them. Still, the speed at which we were able to remotely experience this meteorite event is unprecedented and that’s because of the “capture everything” mindset.

The idea of wearing a camera to capture your entire life isn’t a new one. Just recently a few start-ups have introduced products meant to do just that. Most actual products take a time-lapse approach, snapping a photo at a regular interval throughout the day. But, it seems clear that the eventual goal is full-on, crystal clear video footage of every single thing that happens. Even the Google Glasses project seems to be hinting at it.

Right now, the technology is a hurdle, but it’s a hurdle that almost never stays standing. The newest GoPro HD Hero 3 Black edition is capable of capture 4K video at 15 FPS. It’s not smooth to watch as a video, but the jump from 15 fps to 24 fps is almost certainly coming. Storage is an issue, for now, with a 16 GB card able to archive between one and two minutes of 4K footage, but compression algorithms are always getting better, and flash memory is constantly getting cheaper.

With enough memory cards and batteries, you could capture your entire day in 4K — 15 images per second at 12-megapixels each — right now. It’s only getting more real. And that’s using a camera that costs just $400.

The effect this kind of thing has on the way we experience current events is undeniably profound. Videos of the Russian meteorite are plentiful, coming to us from across the world almost instantaneously. Not only can we watch it, but we can watch it over and over again from almost any conceivable angle.

Flash back just 12 years ago to 9/11. It was one of the most tragic and important events in modern US history. There are several videos of the incident, but almost none of the first plane hitting the tower. In one of the most crowded cities in the world, almost no one managed to capture it. In a constantly recording world, there would be seemingly infinite angles of it. Same with the recovery. Video from inside the buildings before they collapsed. We would see it all. But would we want to?

On a more personal level, it would likely have similar implications. You’d never miss a shot. You wouldn’t lose details to age and you wouldn’t be able to idealize things in your memory as time passes. Singular photographic and video mementos would be replaced with a surveillance camera-like stream of images. Just like the Russian car cams or New York bike cams, would you merely be collecting evidence of your life?

While there’s clearly are clearly broad cultural implications of a world constantly filled with running cameras, the affect it has on photography in general is even more profound.

The death of the “decisive moment” has been on the tongues of writers for years. “F/8 and be there” would be replaced with simply “be there.” In a way, it turns photojournalism into even more of an extreme sport. You don’t have to worry about using the camera, you just have to be willing to put yourself into increasingly harsh environments to get images of things that would likely otherwise go unrecorded. In fact, some photojos have been using camera phones in conflict zones simply to help them blend in better. This is further along in the evolution.

Don’t get me wrong, I have faith that true photography will always endure. For every shaky video we saw of 9/11, there were dozens of incredible images, composed and exposed with purpose. But that takes time and that’s not something the currently news cycle allows in most cases. Getting a picture turned around in a matter of hours used to seem incredibly fast. Now, if the video isn’t uploading via WiFi seconds after it was shot, it will likely get passed over for someone with a faster connection or a quicker finger to the upload button.

We’ve also gotten to the point where shakiness and flaws, in some cases, lend credibility to a photo or video. To an extent we have come to equate high levels of image quality with being staged. Composing with aesthetics in mind rather than pure documentation can make an image or video feel more like a piece of art than a piece of evidence. Commentors on the internet are even quicker to offer the ever-present rally cry of “fake!”

Looking to the future, it’s hard to know what we’re really going towards. It seems like science fiction to imagine people with bionic camera eyes and heads full of flash memory, but it’s already more real than some may think. And I have to admit, if they start doling out robotic camera eyes, I’m definitely getting one. I’m just not quite sure, yet, what that says about me.