Shooting The Olympics: Inside The Camera Bag Of Getty Photographer Streeter Lecka

What kind of kit would you bring to cover the biggest sporting event in the world? 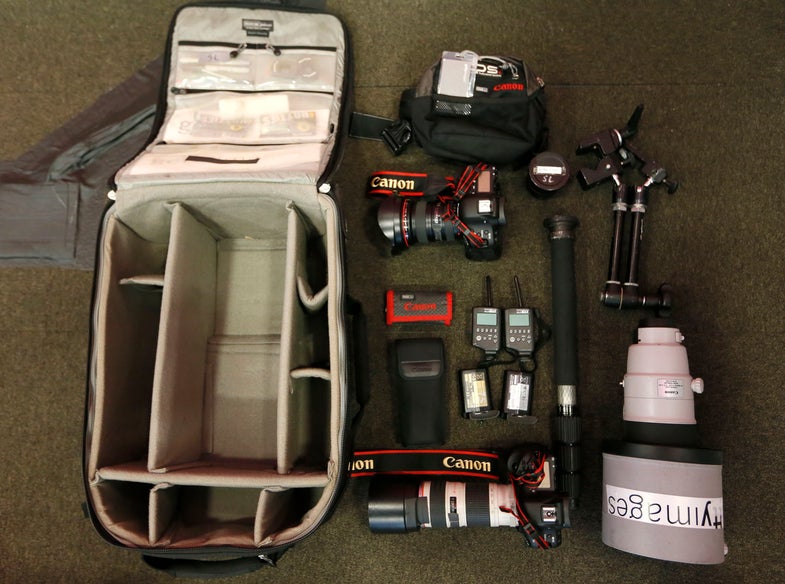 For many photographers, shooting the Olympics is a dream assignment. For the next few weeks, veteran Getty shooter Streeter Lecka will be on the ground in London to capture the games in all their athletic glory. Before the action got under way, he gave us a tour of the gear he’ll be using to get shots of everything from gymnastics to rowing. You can keep up with Streeter and the rest of the Getty shooters at their Live From London site.

How many bodies did you bring with you?

I actually brought four bodies all together. In the bag that I’ll take on a daily basis will be the two Canon 1D Xs. The other two are the older 1D Mark IVs which I’ll use as remote cameras.

How much of a beating do you expect them to take over the course of the games?

I’ll give them a run through the ringer on this one for sure [laughs]. By the time we’re done with the next couple weeks, they’re probably going to need to go into Canon Professional Services to get checked up. Especially the older cameras. A lot of times we’ll put the remote bodies in places where they might get a little wet or otherwise beat up.

How much do you rely on the remote shots?

99% of the time, the pictures I make are going to come from the hand-held. The remotes are really there in case I want to try something unique or different. It’s really just icing on the cake if you get something from that.

How do you fire them?

I’ve got four Pocket Wizards, but normally I’ll only be carrying around two of them.

How many frames do you expect to shoot in an average day?

To be honest, I’m not sure, but I would say it will probably be somewhere between 2,000 and 4,000 depending on what events I’m doing. You have to consider the speed at which things are happening and then you’re only picking and choosing a handful of images. 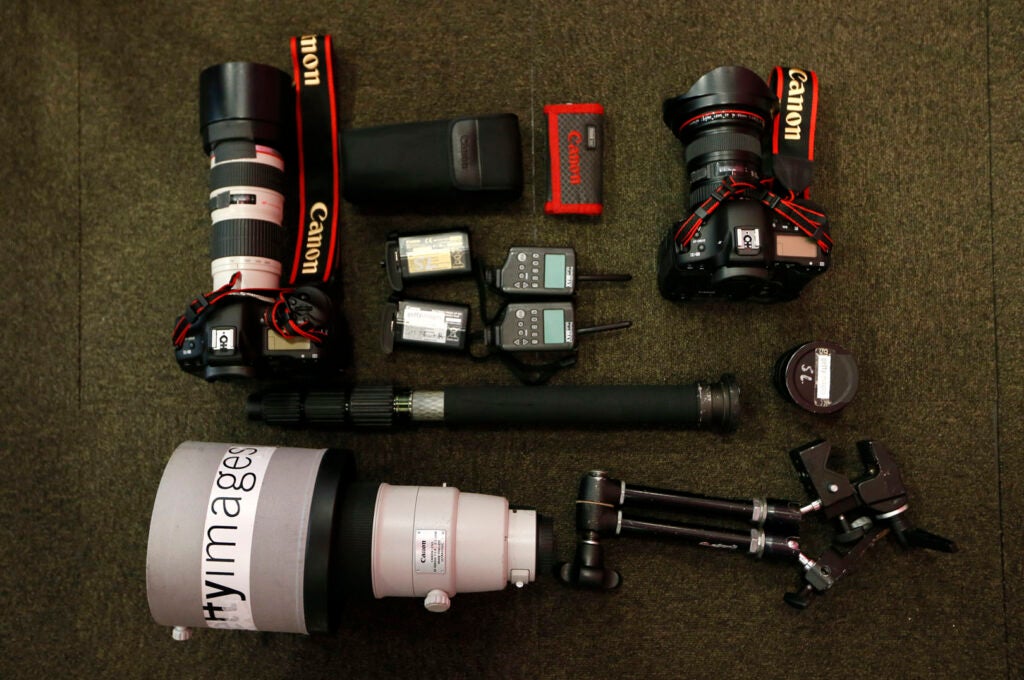 during a Beach Volleyball practice session ahead of the London 2012 Olympics at Horse Guard Parade on July 26, 2012 in London, England.

How much do you get to use flash?

I bring a 580 EX II flash gun with me just in case. You’re not supposed to use flash photography, but if I’m outside and I see something on the way to an event, I have a flash just in case.

What kind of camera support do you bring?

I have a monopod for the 400mm, of course. I also carry a Magic Arm clamp so I can hang a remote camera wherever I need to. Even if I want to put it on the ground, most of the time there’s something I can clamp it to. It lets me try a lot of things.

What capacity memory cards to you use?

Right now I’ve got a bunch of 8 GB cards. I have a few older 4 GB cards that I put in a separate pouch just in case. Sometimes I’ll just leave it in one place if I’m shooting somewhere else, like on the other side of a field. Sometimes you can’t get back to what you need all the time.

Do you have bigger cards to use in the remote cameras that you might not be able to access easily?

Even with the big 1D X files, the 8 GB cards are still enough?

We’re sending images back to the editors really quickly, so even if I only have a 4GB card, that’s usually fine. Every time there’s a break in the action, I’ll run back to the computer, plug in and send it back to the editors. That way they’re not getting 600 or 700 images at a time.

How do you transmit your images?

Getty has our own lines that are hardwired into every single event. Our tech crew came over months before to get an idea of where we’d be shooting. We can just plug in and send from there. The editors are in the media center where they can send it out immediately.

I have a backpack everyday with a computer and a card reader. When I plug it into the wire, push in the card, and press start, it automatically sends everything to the editors. Everything transfers to my computer as well. I also bring a separate little hard drive so I can back up everything I shoot for myself. If I want an original RAW file, I can get it if I want to.

How many batteries do you carry?

I have 8 batteries total. The great thing about the batteries in the new cameras, though, is that they really do last forever. Even after a full day of shooting, I might only use one battery. I make sure I have at least one backup for each camera just in case, but it’s not really something I worry about much anymore.

Do you keep a teleconverter in the bag in case the 400mm isn’t quite long enough?

I don’t usually use a lot of the converters. I’m not thrilled about them overall. I’ve found that the file quality and the size on the new bodies is so good that, even if I have to crop a little bit, it still holds up. For the most part, the Olympics have so many different photo venues that you can get where you need to be, anyway.

Do you worry about forgetting a key piece of gear when going to an event?

Cards, Camera, Computer, Credentials, at the end of the day, are all you really need. If worse comes to worst, you’ll still be OK if you have those.

The games haven’t really started yet, but do you know what you’ll be shooting for the duration of the event?

It’s pretty cut and dry. I’ll do rowing one day, gymnastics another. I think there are four or five different events I’ll be shooting in the first couple days. If I get done with an event a little bit early one day, I’ll go to the editors and say, “What do you guys think about me going to this event?” I’m never going to be sitting around wondering if I can shoot. There’s always something to find. It’s about how much you want to push yourself. You can shoot your event and then be done for the day, but you don’t work for four years as hard as you can to get sent over on this team just to sit around.