A tough and speedy shooter adds more pixels and gets more sensitive. 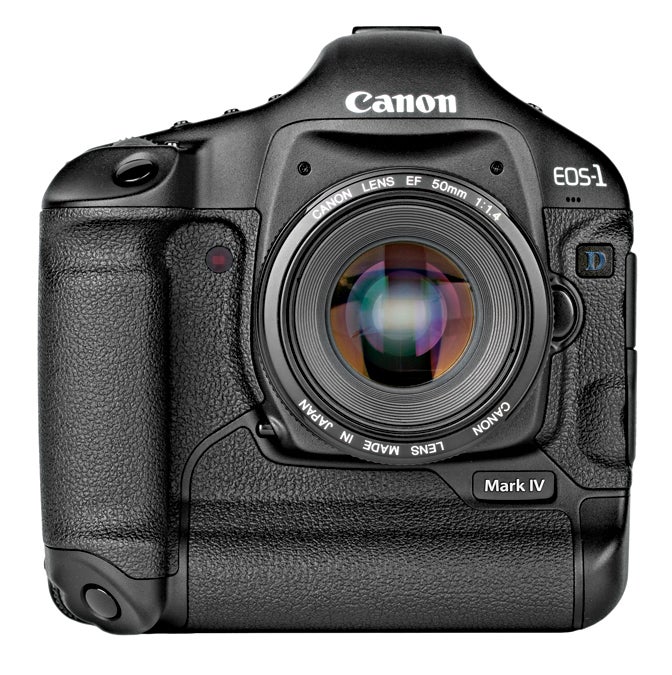 Appealing most to sports shooters, news photographers, and any others who need a solid, weatherresistant workhorse body, Canon’s EOS-1D series has long been a leader in camera technology. The latest in this line, the EOS-1D Mark IV ($5,000, body only) brings with it a new 16.1MP CMOS APS-H (1.3X lens factor) sensor, as well as a new 45-point autofocus system, full 1920×1080-pixel 30-frames-per-second video capture, and sensitivity of up to ISO 102,400. But how did it fare in our lab and field testing? Read on.

First, the good news. Results from our three main tests placed the 1D Mark IV at the very top of an Extremely High overall image quality ranking, just a bit shy of Excellent. Specifi cally, color accuracy was Excellent with a Delta E score of 6.56. Resolution measured a more-than-respectable 2490 lines, just below the 2500-line minimum for an Excellent rating.

With that resolution edge comes a bit more noise at lower ISOs than we saw in the Nikon. At default settings, the Canon scored an Extremely Low rating at ISO 50 (the Nikon starts at ISO 100), but stepped up to Very Low from ISO 100 through ISO 400, where the Nikon maintains Extremely Low noise.

The rankings flipped again in Nikon’s favor at ISO 25,600 through 102,400—though noise was Unacceptable at these sensitivities with both models.

If there’s bad news from our lab tests, it’s the 1D Mark IV’s lowlight autofocus performance, which lagged significantly behind the Nikon’s.

Because the 1D Mark III suffered from AF problems in some units from its inception, we weren’t surprised that Canon created a completely new AF system for the Mark IV. We were surprised, though, to see that the new system proved slower in our tests than the old one, even in bright conditions. This isn’t to say that its performance was terrible, but in a camera of this caliber, we expect more.

Ultimately, it seems as though the Mark IV is deliberately tuned for brighter situations. Indeed, with AI Servo tracking turned on, it did a fine job of maintaining focus on subjects moving throughout the frame, as well as toward or away from the camera. Canon says that new algorithms were created for such situations and that the AF processor works in tandem with the camera’s main processors during tracking.

Like its predecessor, the Mark IV has two of Canon’s processors inside—in this case, a pair of Digic 4 chips. That’s a lot of horsepower, but necessary for the camera’s scorching capture speed: up to 85 full-sized JPEGs (with JPEG compression set to its default of 8 instead of the highest quality level of 10) at 10 fps before the buffer fills. If you’re using one of the latest CF cards with an Ultra DMA Mode 6 classification (e.g., the Lexar Professional 600x or SanDisk Extreme Pro), you can expect up to 121 of those JPEGs.

That 10 fps is one frame more per second than the Nikon at full resolution, although the D3S can capture 11 fps when set to its DX crop mode, which serves up 5MP images using only an APS-C-sized area in the center of the sensor—in that mode, the Nikon’s images would be even further behind the Mark IV in resolution.

As is always the case with Canon’s 1D series, this is one solidly built camera. A magnesium- alloy shell ensures that it can stand up to a beating, while the shutter is rated to last for 300,000 cycles. All connectors, except the hot-shoe, find their home behind tight rubber covers, and the card slots (one each for CF and SD) are covered by a tight-fitting door you open with a switch. The hot-shoe is surrounded by a plastic rim to seal that connection when you’re using one of Canon’s newer Speedlites, which have rubber around their feet.

The controls are made for quick changes, and there are plenty of dedicated buttons for various functions, as well as customizable buttons you can set to your preferences. Canon hasn’t made any major changes to the body design, so anyone familiar with the Mark III will feel at home with the Mark IV.

The 3-inch LCD got a boost to 920,000 pixels, so image playback and live-view shooting are both more pleasant. But the contrast AF in live view is still slow, and the process of using the standard phase-detection AF in this mode remains a clunky affair involving a momentary flip down of the reflex mirror. (That’s typical— the only DSLR maker to have licked this problem is Sony.)

In our field tests, handling and controls proved fast and fluid. The duplicated buttons near the thumb are a nice touch that came in handy when selecting focusing points or using AF-On to activate AF. The placement of the rear control wheel is spot-on, and when you change from the main grip to the vertical grip, it’s basically in the same place, making for very comfortable operation whichever orientation you choose.

And, while the Mark IV’s grips are well designed, with a divot for your middle finger in horizontal and a ridge for leverage in vertical, shooters with small hands may prefer the grip on the Nikon D3S, which is more intricately sculpted and gives you a little more leverage when panning.

Footage is stored as MOV files using H.264 compression, and sound can be recorded either through the built-in monaural microphone or an external mic, thanks to the stereo minijack audio input.

There’s also a mini HDMI output in case you want to watch your video—or view still images—by connecting the camera straight to your TV (if your TV has such an input).

Despite its slightly slower AF, the EOS 1D Mark IV is a worthy follow-up to the Mark III. In our opinion, it can’t quite keep up with the Nikon D3S. But the decision comes down to what type of shooting you do most— and of course, whether you’re already invested in one system or the other.

If you need full 1080p video recording in your DSLR or the versatility of ISO 50, for instance, this is the better camera for you. If you frequently shoot in low light, though, the Nikon’s ability to focus in less than a second even at the dimmest level in our test (EV –2) will win you over.

This is a tight race between two excellent machines. 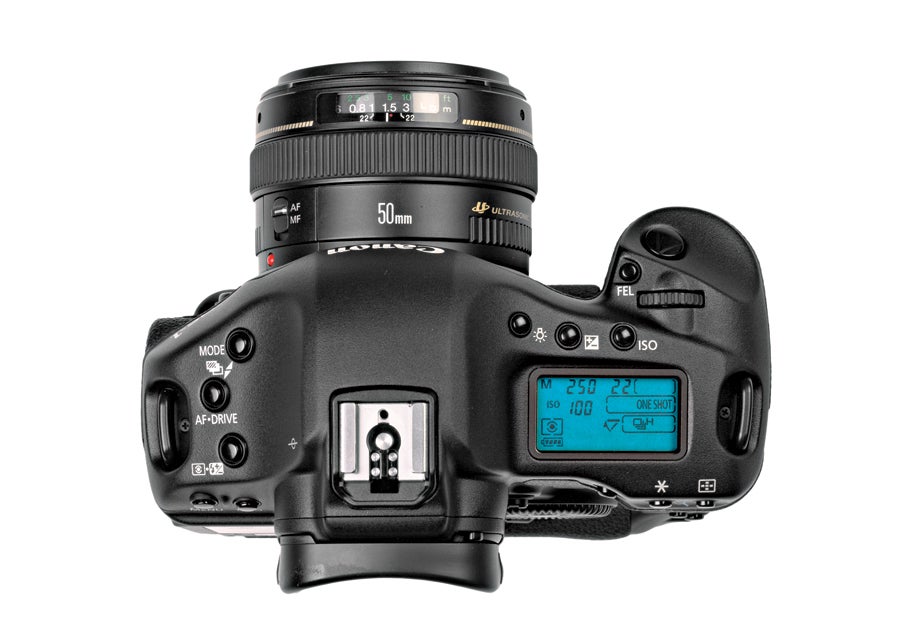