Nikon D300s Sent Into Space On A Weather Balloon

We've seen cellphones and small cameras sent above the atmosphere before, but this is the first DSLR that we've heard about. 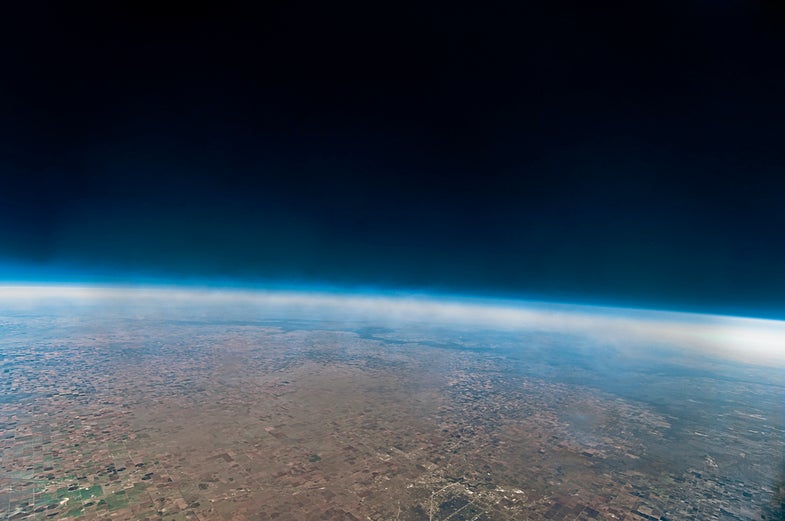 There’s currently a bit of a trend of sending cameras into space. Usually, you load up a protective case with a cheap cellphone or compact camera and a GPS transmitter, and then you send it into the sky on a weather balloon. Once it gets high enough into the vacuum, the balloon pops, and the whole unit hurtles to the ground, eventually slowed by the parachute. Then you just follow the GPS signals to find it, and grab your awesome images. Even with the accuracy and inexpensiveness of modern day GPS units, people tend not to put too expensive gear in these packages, just in case everything fails and they crash to the ground.

But not Erich Leeth and Terry Presley of Lubbock, Texas. They used a Nikon D300s outfitted with a Tokina 11-16mm f/2.8, more than $2,000 worth of gear. They loaded it up in a WalMart styrofoam beer cooler, and used an old cellphone for the GPS.

You can check out more of their photos on Flickr. They don’t know exactly how high the rig raised, but they guessed about 100,000 feet. If only it weren’t for the condensation buildup, this would have been an absolutely incredible series of shots. Something to look at for round two?

By sending their Nikon over the atmosphere, these guys have joined a long and storied tradition of Nikon DSLRs and space. It’s NASA’s preferred brand, and many of those Nikons never return to the ground. We’d also be interested to know if the sensor on that D300s is okay after the flight as it wouldn’t be shielded from radiation at all, and there’s been some discussion if cosmic rays might do it harm