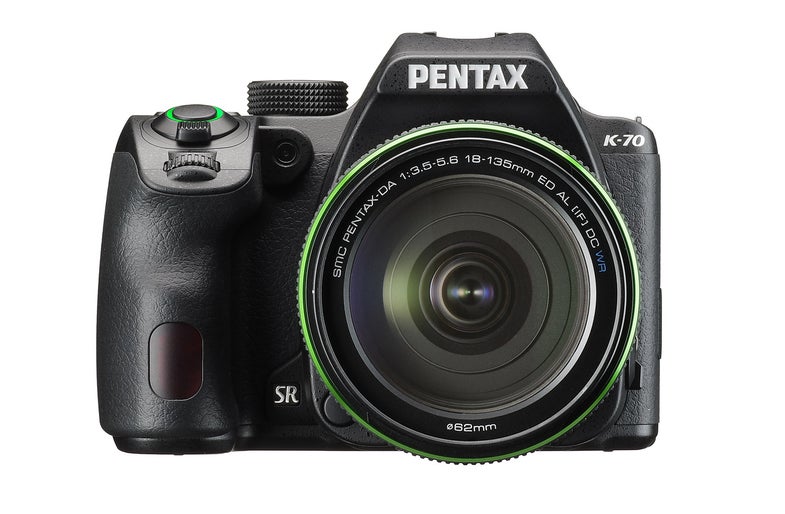 Most Pentax news lately has involved its first full-frame DSLR, the K-1, but parent company Ricoh hasn’t lost sight of the rugged APS-C-sensor DSLR market in which Pentax has had success. The new K-70 DSLR is a spiritual successor to the rugged K-50 that came before it, adding even more high-end features to the spec sheet.

The heart of the K-70 is an 24.2-megapixel APS-C-size sensor with phase detection autofocus pixels integrated for improved focus in Live View mode and continuous tracking during video capture. The sensor is paired with Pentax’s PRIME MII image processor, which pushes the maximum ISO setting up to 102,400.

Wrapped around those delicate digital guts is a redesigned, weather-proof body that resists dust and moisture. The grip has been redesigned to increase your hold, and the Vari-angle LCD screen rotates for composing shots beyond eye-level more easily.

The sensor doesn’t have an anti-aliasing filter in an effort to maximize the amount of detail it can capture, but it does have an AA simulator to combat moiré, which is an unsightly pattern that can appear in some photos with fine detail with a filter to correct it. It’s not a tough fix in post most of the time, but this saves the extra step.

The in-body (sensor-shift) image stabilization system promises 4.5-stops of stability when handholding for shooting in low light. For extra-bright conditions, it has a maximum shutter speed of 1/6000 sec., which is above average for a DSLR at the consumer level. Because of the shifting sensor, Pentax has also included the Pixel Shift Resolution System, which captures four images and combines them into one super-detailed file, a feature also found in the flagship K-1.

As you probably expect from a Pentax DSLR, it uses a glass prism, which covers “nearly 100-percent” of the camera’s field of view.

Ultimately, there’s a lot going on inside this DSLR, which is pretty impressive when you consider that it checks in at just $649. It doesn’t come as much of a surprise, though, as great value has long been the Pentax wheelhouse when it comes to DSLRs. The K-50 was rather excellent, so hopefully the K-70 follows suit.

In addition to the K-70 camera, Pentax is also announcing a new HD Pentax-DA 55–300mm f/4.5–6.3ED PLM WR RE zoom lens. As the WR in the name suggests, this is a weather-resistant lens designed to be used with cameras like the K-70. It has a full-frame equivalent field of view of an 84.5–460mm zoom.

While the new lens is has smaller maximum apertures than the 55–300mm f/4–5.8 ED WR that came before it, the new version uses a pulse motor and a rear-focus system to make it nearly 10% lighter and up to 8 times faster in terms of focusing, depending on how far you have it zoomed. The new 55–300mm lens focuses pretty close, too—down to 37.4 inches.

At first glance, this seems like a great update for Pentax. By keeping the emphasis on weatherproofing and in-body stabilization, as well as a true DSLR focusing system, the company is emphasizing its advantages over other DSLRs at this level and competing mirrorless cameras.

Once review units become available, we’ll take the K-70 into the Popular Photography test lab. Then we’ll take it to play in the mud.