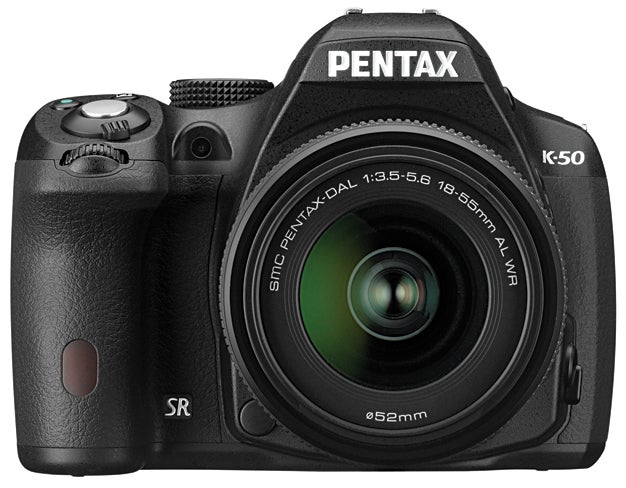 The Pentax Way, for a long time now, has been to offer up rugged, weather-sealed DSLRs priced well below comparably built competitors. Its latest DSLR, the Pentax K-50 ($697, street, body only), continues this trend, while also showcasing a new Pentax Way: offering a vast array of color combinations for the camera’s shell and grip. In this case, you can choose from 120 (!) color combinations.

Inside that colorful shell, you’ll find a 16.3MP APS-C-sized CMOS sensor that can be ramped up to a sensitivity of ISO 51,200, a shutter that can slice time at up to 1/6000 sec, and a powerful Prime M processor that lets you capture in bursts of up to 6 frames per second. We ran it through the Popular Photography Test Lab and field tests to see how its performance stands up.

In the Test Lab
It’s rare for a 16.3MP camera to rack up enough lines per picture height to achieve an Excellent rating in our tests. The Pentax K-50 fell just shy of that top award, earning a still-impressive Extremely High rating from ISO 100 through 400 in overall image quality.

Resolution measured 2470 lines at the camera’s lowest sensitivity of ISO 100—about the same as the Olympus E-P5. These are, of course, two very different kinds of cameras. A better comparison to the Pentax might be Nikon’s D5200, as it illustrates the tradeoffs Pentax makes to produce such a rugged camera at this attractive a price. The D5200 turned in 2770 lines of resolution at ISO 100, but it can’t match the K-50’s weather-sealing, and tops out at a burst rate of 5 fps.

If your print is 13×19 inches or smaller, you should be fine with the Pentax, unless you plan to do some severe cropping. And we’re sure that most shooters making larger prints will choose a more advanced camera than those in the Pentax K-50 and D5200’s price range.

In part due to Pentax’s minimal use of noise reduction in the default settings of its RAW conversion software (a modified version of Silkypix), the K-50 holds a lot of its resolution as the sensitivity rises. At ISO 800, it served up 2450 lines; at ISO 1600, 2380 lines; and by ISO 6400, 2300 lines. Past this point, Pentax raises the noise reduction setting to half power from zero. So at the the camera’s top sensitivity of ISO 51,200, noise reduction obscures enough detail to allow for only 1850 lines.

The Pentax’s color accuracy scored an Excellent rating with an Average Delta E of 4.8. This rating assumes the use of a gray card for white balance; in our field testing, we found that the camera’s automatic white balance sometimes needed a tweak later.

Since Pentax’s RAW converter doesn’t apply default noise reduction to RAW files until the sensitivity is extremely high, the camera doesn’t fare very well in our noise test at middle and higher ISOs. At ISO 100 and ISO 200, though, it scored an Extremely Low rating. That rises to Very Low at ISO 400, and then to Moderately Low at ISO 800. Beyond that the Pentax K-50 got Unacceptable ratings, although prudent application of noise reduction would let you rein in noise to acceptable levels without too much loss of resolution at up to at least ISO 3200.

One place that the K-50 lags a bit is autofocus speed in dim lighting. In the brighter half of our AF test, the camera did a fine job of locking on target and capturing an image. At EV 12, it does so in a speedy 0.38 sec, and at EV 8, virtually the same. But it slowed quite a bit by EV 2, where it took more than a second to focus and fire. At the dimmest light level that the AF is rated to handle, EV –1, the camera slowed to 1.48 sec. At the lowest light levels, the Nikon D5200 handily outperformed the Pentax.

In the Field
The Pentax K-50 feels very comfortable in the hand, with a wonderfully sculpted grip and a little swooping ridge on the back to give your thumb leverage while angling the camera. A pair of command wheels make manual shooting more convenient, and though there aren’t a vast number of dedicated buttons, the most important settings have buttons to provide direct access. There’s also a dashboard-style menu that lets you see the settings and change them by navigating through that screen. You can also press and hold the center button on the direction pad on the camera back to quickly access AF point selection.

The K-50, as expected, has a rugged magnesium-alloy chassis, with 81 seals on the body to ward off moisture and dust. So, if you have one of Pentax’s WR (weather-resistant) lenses attached, such as the 18–55mm f/3.5–5.6 DA kit lens, you can shoot with reckless abandon while it’s raining or snowing

The 3-inch 921,000-dot LCD doesn’t tilt; we found ourselves missing the articulated LCD of the Nikon D5200 while shooting video and, occasionally, stills. But the Pentax K-50’s 100-percent-accurate pentaprism viewfinder made framing a joy.

The contrast-detection AF used by the K-50 in video and live-view shooting was remarkably fast, though if you are using a lens that doesn’t have a built-in AF motor (such as one of Pentax’s Limited series prime lenses), AF becomes quite loud. While the video that we captured looked nice, the built-in microphone is monaural, and there’s no microphone input.

Burst photographers should be pleased with the K-50’s 6-fps rate. Though it takes only 8 RAW images to fill the camera’s buffer, you can grab up to 30 JPEG shots before you hit the limit. AF tracking reliably kept up with the burst speed—although not quite as well as you’d expect from a more expensive pro body, so expect a misfocused shot here and there.

The K-50 can merge three shots into HDR images, with exposure brackets of up to +/– 3 EV. It can also make multiple exposures of up to 9 frames, while automatically adjusting for exposure. A built-in intervalometer can capture up to 999 shots at intervals from 3 seconds up to 24 hours.

The Bottom Line
Pentax’s cameras are always hard to compare to those from other manufacturers; it opts for more rugged designs and often eschews the trendy features du jour. With the Pentax K-50, Pentax neither pushes the limit on pixel count nor jams in as many video capabilities as possible. Instead, it offers a DSLR that can stand up to the elements and deliver a high-end shooting experience, yet won’t place undue burden on your finances. For many photographers, we think that may be a winning formula.