Higher resolution, better autofocus, and faster bursts—not to mention a swiveling LCD, all for a swoon-worthy price 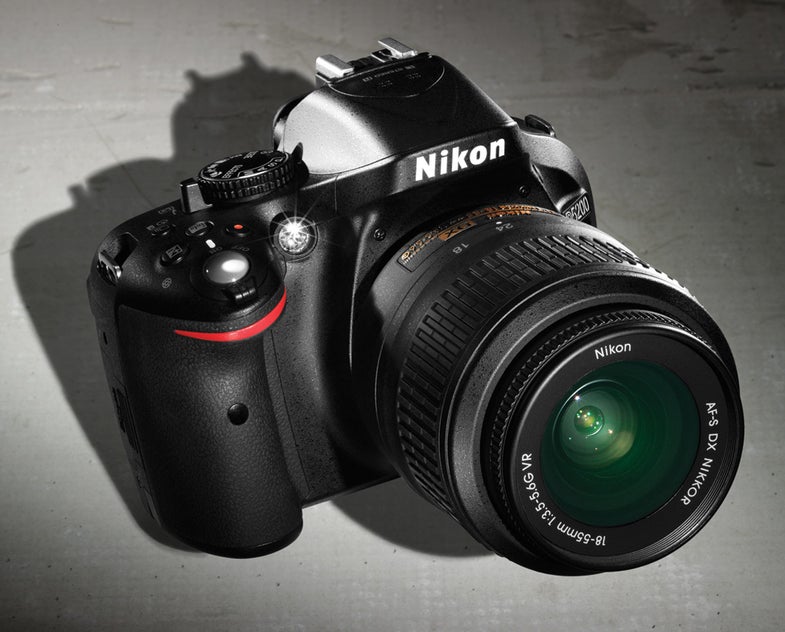 When Nikon first created its step-up 5000 series with the D5000, it was conspicuous as the sole Nikon DSLR with an articulating LCD screen. Now, the third generation of the tilt/swivel set, the D5200 ($797, street, body only; $897 with 18–55mm f/3.5–5.6 AF-Nikkor VR lens) gains a whopping 50-percent increase in pixel count (to 24.1MP) over its immediate predecessor, upgraded autofocus, and a boost in burst shooting. As always, we wanted to see how this latest Nikon DSLR would fare in our lab and field testing.

In our resolution test, the D5200 outdid the D3200 slightly, delivering 2770 lines per picture height versus 2710. Both scores are more than enough for an Excellent rating in this test. And the D5200 held enough resolution for an Excellent rating all the way up to ISO 6400, where it hit 2500 lines—exactly at the lower limit for top honors. At its top sensitivity of ISO 25,600, the D5200 dropped to 2330 lines of resolution—much of this lost to noise reduction to keep unintended dots from sullying images.

This augured well for aggressive noise suppression. Indeed, at its lowest sensitivity of ISO 100, the D5200 scored an Extremely Low noise rating. So, under ideal conditions, this camera captures super-clean images with oodles of detail, a tour de force considering its relatively low price.

In color accuracy, the D5200 easily achieved an Excellent rating with an average Delta E of 6.9. Again, the results were very similar to the D3200, which turned in a 6.5 in the same test.

All together, the Nikon D5200’s performance in our three core imaging tests earned it an Excellent rating in overall Image Quality from ISO 100 through ISO 800. That beats competitor Canon’s 18MP EOS Rebel T4i, which got with an Excellent rating up to ISO 400. So the extra pixels paid off for the D5200.

But the Canon outdid it on another key performance indicator: autofocus speed. In our AF test, the D5200 proved slower than the T4i across the board. At the brightest level of our test, EV 12, the Nikon focused in 0.50 sec compared with 0.33 sec for the Canon. The T4i held a respectable lead with 0.45 sec at EV 6, where the Nikon took 0.62 sec to lock focus and capture an image. At the extremely dim light level of EV 0, the differential tightened: The D5200 took 0.97 sec, only slightly longer than the Canon at 0.89. But the latter managed to focus at EV –2, albeit sluggishly, taking an average of 1.28 sec to do so; the D5200, which is rated only to EV –1, failed to focus at EV –2. As is typical of AF, the D5200 also became less consistent in the dimmest light, sometimes logging slower results than the average we report.

In the Field
The Nikon D5200 is on the small side for a DSLR, though still much larger than an interchangeable-lens compact—even the relatively bulky Panasonic Lumix GH3. The grip feels nice in the hand, but, being rather short, makes your pinky more likely to dangle from the bottom or tuck up underneath it. A nice patch of rubber on the back of the camera gives some extra stability for your thumb.

The articulation of the D5200’s 3-inch LCD matches that of its predecessor: It flips out to the left side (with the camera back facing you) and then rotates around the pitch axis. (The D5000’s screen tilted downward before rotating around the yaw axis, which aligned the screen with the center of the lens.)

Unlike Canon’s Rebel DSLRs, which put the exposure compen-sation button on the back, the D5200 has it near the shutter release. And its lone command wheel is on the back, while Canon puts this near the shutter release. So if you prefer holding a button with your thumb while moving the wheel with your finger, or vice versa, this may prove important.

Controls on the D5200 are mainly menu-based, so there are relatively few hard buttons on the camera. One assignable function button may let you put another control at your finger-tip—as long as it’s among the 14 controls that this button will accept. Otherwise, you’ll have to use Nikon’s control-panel style Information Display on the LCD. We found this easy to use and a quick way to change settings. The only downside? You must take your eye away from the finder to change most settings.

The navigation pad also lets you change the autofocus point when you have set the camera to selectable-point AF. (There is no clear indication of this on the body, a good reason to read the instruction manual.)

And the D5200’s 39-point AF system is a considerable upgrade from the 11-point array of its predecessor and of the current D3200. It provides both more coverage across the frame and more granular selection.

Fans of live view will be pleased that a flip switch next to the mode dial lets you access this shooting mode very quickly and easily. The downside is that we inadvertently entered live view numerous times during our field tests; if you leave the camera turned on while walking around, it’s pretty easy to make this mistake. Not a big deal, as you can exit live view quickly enough, but occasionally annoying if you’re rushing to bring the camera to eye for a grab shot.

The new camera lets you shoot in bursts of up to 5 frames per second, compared with 4 fps with the D5100 and D3200. This puts it at the lower-end cutoff for what we consider adequate for serious sports shooting, so it’s a decent choice for action shooters on a budget.

For burst shooting, you’ll get more shots before the buffer fills with JPEGs than with RAW images: Full-resolution Fine JPEGs will fill the buffer after 35 images, while RAW brings that number down to 8. If you want to capture RAW and large Fine JPEGs simultaneously, you can only expect 6 shots per burst. Not great, but it beats Canon’s T4i, which, while also capturing at 5 fps, will poop out after only 3 RAW + JPEG shots, 5 RAW captures, or 30 Large Fine JPEGs.

In our field testing, the D5200’s continuous AF did a good job of tracking along with moving subjects. We were able to get sharp shots of cars zipping through city streets at 5 fps. As long as you allow for the first shot to lock on, the camera will generally keep up from there.

We were pleased with video captured by the D5200. Footage had nicely saturated and accurate colors, and it showed minimal video artifacts. Given that Nikon hasn’t implemented phase-detection autofocus during movie capture, Canon has a slight edge here, but only if you are using one of Canon’s STM lenses, of which there are only a few to date.

The Bottom Line
Nikon has made a compelling DSLR in the D5200. If you like the convenience of an articulated LCD screen and are invested in the Nikon system, it’s basically your only option other than the D5100. But that is hardly a limitation, given that the D5200 performs well and delivers very fine images.

If you are not invested in any system, you should strongly consider the D5200, a very solid choice for a DSLR at this price.

But if you’re open to an ILC, the decision becomes harder. Your options include Micro Four Thirds as well as APS-C-sensor models from Samsung or Sony. (Nikon’s own System 1 cameras are less compelling, given their smaller sensors and very limited lens line that can’t match the breadth of lenses available for Micro Four Thirds, or, of course, the vast catalog of Nikon F lenses that work with the D5200.)

The plain truth is that if you want a DSLR kit for less than $900, you likely won’t regret opting for the D5200.