A new chapter for the Olympus Pen 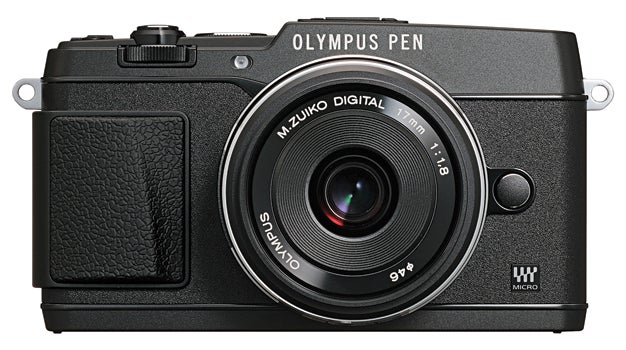 Since the E-P5 follows Olympus' trend of using sensor-shift image stabilization, you'll benefit from its steadying affect with any lens you mount on the body. For our image stabilization test, we shot with a 40–150mm f/4.0–5.6 zoomed to 150mm (300mm equivalent).
SHARE

While the Pen E-P5 lacks the OM-D’s extensive weather-sealing and lovely electronic viewfinder, we appreciated the small size, especially when using it with its petite 17mm f/1.8 kit lens (the camera streets for $999, body only; $1,449 with this lens and VF-4 electronic viewfinder). Plus, the P5’s images provide plenty of detail and well-controlled noise.

In the Test Lab
The E-P5 fell just shy of top honors in our resolution test, thereby earning an overall Image Quality rating of Extremely High from ISO 100 through ISO 1600 in our tests.

As is common, the E-P5 aced our color accuracy test with an average Delta E of 7.9—not quite as impressive as we’ve seen in some cameras lately, but still an assurance that colors will be very faithfully reproduced.

In our resolution test, the E-P5 turned in 2460 lines per picture height at its lowest sensitivity of ISO 100. That puts it at the top end of the Extremely High rating band on our scale. By ISO 1600, its resolution score dropped fewer than 100 lines to 2375, slipping to 2300 at ISO 3200, and 2270 at ISO 6400. From there, noise dropped off more sharply, ending up at 1780 lines at the camera’s top sensitivity of ISO 25,600. While this looks like a steep drop, it’s likely due to Olympus’s aggressive noise reduction at higher ISOs. So, if you find yourself in a situation where you absolutely need to crank up the ISO just to get any image, you should end up with a shot that you can print at a small size or share on Facebook.

Noise is kept to impressively low levels throughout the camera’s sensitivity range. As noted, this comes at the expense of resolution at the high end of the ISO scale, but it also makes it easy for anyone who buys the camera to get great results from RAW images. Note, though, that the Olympus Viewer software that comes with the camera doesn’t offer the same level of adjustments you can perform with such editing programs as Adobe’s Photoshop Lightroom.

When a camera’s resolving power remains within one rating band and color accuracy is excellent, we use noise as the limiting factor (specifically, the range at which noise scores a Low or better rating) to determine the range of ISOs for our image quality rating. The E-P5 keeps noise to Low or better up to ISO 1600. At ISO 100 and ISO 200, the camera got top honors of Extremely Low noise—something of a rarity for ILCs. Noise didn’t reach an Unacceptable rating until ISO 12,800.

Most amateur photographers will be impressed with the images that the E-P5 can produce. Pros will notice some compromises compared with gear that costs thousands of dollars more, but for them this will likely be a second body for use in more casual situations. And given their skill and experience, serious photographers will still be able to work within the E-P5’s limits to make amazing images.

In the Field
Each generation of Olympus’s P-series cameras brings more refinement to the shooting process. This time we see a solidly built body that bears even more resemblance to the company’s film-era Pen half-frame cameras than the original digital Pen had. The shell on the metal body has extremely tight seams between parts, with no visible screws, except on the camera bottom and behind the tilting 3-inch, 1.04-million-dot touchscreen. The result is a body that feels extremely solid and looks downright sleek. There’s even a silver/black two-toned version if you go for that retro look.

One of the big differences between the E-P5 and OM-D is the new camera’s lack of a built-in viewfinder. For some this will be a detriment, though for an increasing number of shooters, it isn’t a deal-breaker. We shot without a finder for about half of our field testing, and although it’s not nearly as steady a way to shoot compared with eye-level viewing, we found ourselves more often trying odd angles that would be impossible otherwise.

Most of the time, between the image stabilization—which netted our testers an average of 3 stops of shutter-speed leeway when shooting handheld—and the camera’s impressive noise performance at higher ISOs, we were able to compensate for the less steady camera position. (If all else fails, there’s always the pop-up flash.) For the other half of our field tests, we attached Olympus’ optional VF-4, a 2.36-million-dot LCD EVF ($279, street). The view has plenty of detail and, though it blanks out some during burst shooting, it has a fast enough refresh rate that you might not find it a hindrance when panning along with subjects moving at slow or medium speeds.

If you are a fan of burst shooting, you should take note that the 9-frames-per-second setting keeps the same focus and exposure settings throughout the burst, while the 5-fps setting meters and focuses for each shot. Continuous autofocus was able to keep up with moving subjects very well during burst shooting.

Furthermore, AF was very speedy overall. Paired with prime lenses, such as the aforementioned 17mm f/1.8, or with larger zooms, such as the Panasonic Lumix G X Vario 12–35mm f/2.8 (a 24– 70mm full-frame equivalent), the E-P5 locked on its target as fast as you can expect any ILC to do so—it rivals what most DSLRs can do in this area.

As far as the camera’s controls go, there’s more to talk about than usual. Not only has Olympus done away with the vertical control wheel and tiny scroll wheel found on its earlier Pen E-P3, it has replaced them with very nice command wheels positioned so you can use them with your thumb and forefinger. And you can assign various functions to these wheels, depending on which shooting mode you’re in.

You can also use a lever on the back of the camera to change between two sets of functions for the wheels—a really great way to change ISO, white balance, or AF mode, or to activate video capture. During our field tests, we used it mainly to control aperture and exposure compensation while shooting in aperture-priority mode, occasionally switching to access white balance and ISO. (This lever was inadvertently switched in our camera bag a few times, so take a quick gander before you start shooting.)

As is the growing trend in fancier cameras, the P5 has built-in Wi-Fi. Download Olympus’ app to let you transfer images to your smartphone for easy sharing. You can also use the app as a remote control of sorts, though this is available only in the camera’s iAuto mode. We prefer an interface along the lines of Canon’s Wi-Fi, which lets you control aperture and shutter speed from your phone. But, this is likely something that could be added in later iterations of Olympus’ app, if the company sees fit to do so.

The E-P5 includes in-the-camera RAW conversion, multiple exposure shooting, a slew of filters you can apply to images after the fact or while shooting, and focus peaking, to help with manual focusing. We’re a fan of focus peaking, which traces colored outlines around objects and surfaces that are in focus at any given time. We especially like to use it in conjunction with magnification.

Both are available on the E-P5, and can be linked when using a lens that controls focus electronically. But you’ll have to assign magnification to one button and peaking to a second if you want to use both of these features simultaneously when you switch to mechanical focusing on an Olympus lens that includes real focusing helicals, such as the 17mm kit lens or 12mm f/2—or when shooting with a lens mounted on an adapter. It was a bit of a bother to figure this out, but that the camera lets you work around this limitation speaks to its versatility. We hope that Olympus can update the firmware to let you assign simultaneous magnification and focus peaking through a single button press.

The Bottom Line
Olympus’ Pen E-P5 is a well-thought-out, elegant little camera with enough imaging and performance prowess to satisfy a huge number of shooters. It might not deliver the most resolution you can get from an ILC, but it certainly delivers sufficient resolution to make prints large enough to satisfy most people’s needs, and it makes sharing your images electronically particularly simple.

Along with its compact size and the large number of lenses available for the Micro Four Thirds system, we think that the E-P5 is a fierce competitor in the ILC game. If you’re looking for a small, interchangeable-lens camera, this new Olympus definitely deserves serious consideration.