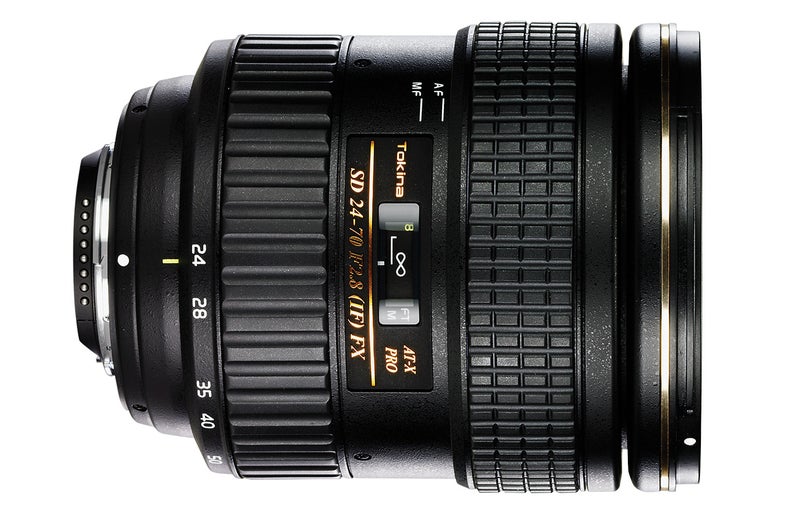 Despite the widespread popularity of full-frame 24–70mm f/2.8 lenses, Tokina has never made an auto- focus version of this versatile wide-to-telephoto zoom—until now. And what a debut! At $999 (street), it comes at a very appealing price, too.

The lens has 15 elements in 11 groups, including three molded all-glass aspherical elements for even illumination across the sensor. It also sports a hard-to-make convex lens element with a large diameter, the first time Tokina is using this design. There are also three SD (super-low dispersion) elements to help maximize resolution.

In length it’s about average for the class, within a quarter of an inch of similar glass from Canon, Tamron, and Sony Zeiss. (The comparable Nikon is about an inch longer and the Sigma more than half an inch shorter.) But at 2.32 pounds it’s the heaviest of all, though the extra weight was not overwhelming (the variation is within about a quarter of a pound). The lens has a brass mount attached to an aluminum base and zoom/focus unit.

The zoom and focus rings are easy to grip, and manual focus turns relatively smoothly though a little short for us (about 60 degrees, compared to at least 90 degrees on most 24–70mms). Autofocus is quick and quiet, and the lens has Tokina’s well-liked push/pull focus clutch for shifting between manual and auto.

In the Popular Photography Test Lab, our SQF tests for sharpness and contrast brought surprising results. Although all the competitors produced excellent results at our 11×14-inch benchmark, this Tokina did better than expected at the 16×20 size, maintaining an A rating at mid-apertures at all focal lengths. At 50mm it held that excellence at those apertures into the 20×24 equivalent, the largest we measure. This was better than comparable Canon and Tamron zooms at all focal lengths, and beat Nikon and Sigma at 24mm. Only the Sony Zeiss beat it (slightly) at all focal lengths.

Our DxO Analyzer 5.3 tests found Visible barrel (0.49%) distortion at 24mm and Slight pincushion (0.13% and 0.22%) at 50mm and 70mm, respectively, similar to most of the other lenses. Again, only the Sony Zeiss stood out, with Slight barrel at 24mm and Imperceptible distortion at the other two focal lengths.

For light falloff, the Tokina did well at all focal lengths, but the Sony Zeiss had no falloff at all. In close focusing and maximum magnification, the Tokina matched the others or came in mid-pack.

But granted this zoom goes for $1,000 less than that Sony Zeiss, it wowed us. Optics proved better than or as good as comparable Canon and Nikon glass, at almost half the price. Sigma’s streets for $200 less than this lens, and Tamron’s for $300 more. But it looks like that large-diameter convex element gave it an optical edge, making Tokina’s first foray into the 24–70mm f/2.8 a roaring success.