Bread-stealing monkeys, a hungry pink flamingo, and more make up the winning gallery. 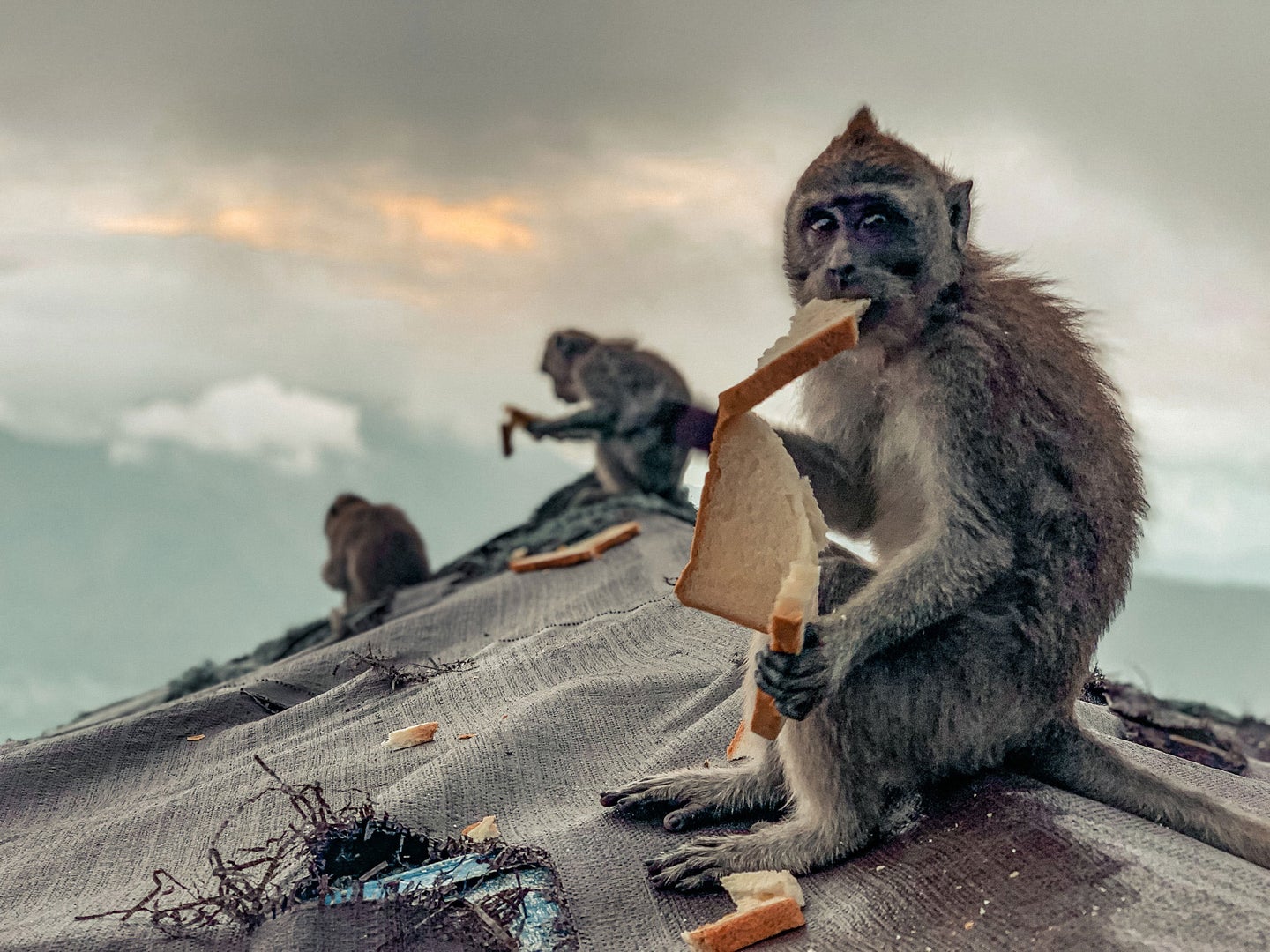 Lions, tigers, and bears, oh my! Well, make that rats, coyotes, and bread-stealing monkeys, and you’ve got the winners of Picfair’s Urban Wildlife Photography Awards.

Since 2019, the number of urban wildlife photographs on Picfair’s photo portfolio and e-commerce platform has quadrupled. And the competition, co-hosted by Nikon, Peak Design, MPB, and Camtraptions, aims to highlight cheeky, resourceful animals and the talent of the photographers who catch them in the act.

About the Urban Wildlife Photography Awards

The international competition features four categories: An overall winner and the best in “Daylight,” “Nightlife,” and “Fancy seeing you here,” which feature animals photographed in unexpected places. Winners and finalists have their work showcased and for sale in a gallery, with 50% of proceeds going to the wildlife conservation organization, Re:wild.

The overall winner received a Nikon Z6II and 24-70mm kit lens. The Daylight category winner earned a Peak Design slide strap and carbon fiber tripod, plus an Everyday backpack. Camtraptions provided the Nightlife category winner with a Garden Camera Trap bundle, while the winner of “Fancy seeing you here” netted a £500 voucher to MPB. All winners also earned a 12-by-7-inch print of their image and a lifetime Picfair subscription.

Overall winner Andrew Interisano of Ontario, Canada, describes an otherworldly scene the night he came across two coyotes, and a pack howling in the distance.

“I was soon compelled to put my camera down and soak in the scene. I’m uncertain if it was the outlying yips and howls eerily filling the street, or the clammy late-spring chill that made my hair stand on end—I do remember that the air was so thick with pollen from the local orchards that it was like a mist swirling amongst the street lamps; it smelled wonderfully sweet and mingled well with the freshly cut field across the street. I cherish that impulse to put the work aside and focus on experiencing the moment. Sometimes when you slow it down and tune your senses in, you walk away with more than just a photo.”

Nightlife winner: Life beyond the sewer, by Austin Montero

Looks like Remy from Ratatouille paid a visit to Latin America in U.S.-based Austin Montero’s winning image. We’re not in Paris anymore!

“The clock strikes midnight in Cuernavaca, Mexico,” Montero writes. “The lack of footsteps from above signals a rat (Rattus norvegicus) to peek out of a city sewer. It stands on its two hind legs and smells the air. What is he smelling? Food? Other rats? Or… danger?”

Daylight: Window to the salt pan, by Mano Aliczki

Mano Aliczki of Hungary recounts the scramble for the perfect shot of this hungry flamingo, as seen through the window of a levee. Though wildlife can be unpredictable, when everything aligns, the results are beautiful.

“I spotted the lonely flamingo on the water from the opposite bank and had to move quickly in position, anticipating (or rather hoping) it would line up with the wooden frame for a shot,” Aliczki recalls. “The flamingo lifted its head from under the water for a split second when I reached the frame, allowing only one shot, before carrying on with feeding.”

They may not be as cuddly as an actual panda, but this raccoon is definitely cute. Jill Finney of Canada caught the little guy hiding out in a drain pipe—sheltering from the weather, or perhaps hunting for treasures/food? We’ll never know.

A few of our other favorites

The birds, by Leanne Hay

I love photographs of birds in flight. It represents freedom, adventure, and the unknown. Canada-based Leanne Hay captured this moment from her favorite spot in Toronto, which is mighty fine in the springtime when the cormorants fly west.

“I was set up for sunrise at 6:30 a.m. and the cormorants started flying in slowly and then by the hundreds. The sound they make en masse is unforgettable. I have seen this a few times but never such a large quantity. What a memorable morning!”

Beak in the Botanic Gardens, by Leigh Henningham

Leigh Henningham of Australia made me chuckle with her almost cartoon-like image of a swan peering down the lens at the botanical gardens in Melbourne. I can almost hear the swan’s voice as a silly animated character. “Who? Me? Yes?”

Tanning In Style, by Nicolas Bamberski

I laughed out loud when I read San Francisco-based Nicolas Bamberski’s caption for this photo. “A boss ground squirrel lays in the sun, the San Francisco Bay and City in the background.” The squirrel definitely looks like a boss, and the comical moment came when I realized…the animal really is a “boss ground” species of squirrel. This little dude sure lives up to the name.

Next year’s competition is not yet open for submissions but if it’s anything like this year’s awards, you’ll be able to start entering toward the end of March 2023. Keep your eyes on the contest website for more details.