The 2022 'Shot on iPhone' Macro Challenge winners include dewdrops on a spider’s web, fizzy strawberries, and intricate snowflakes. 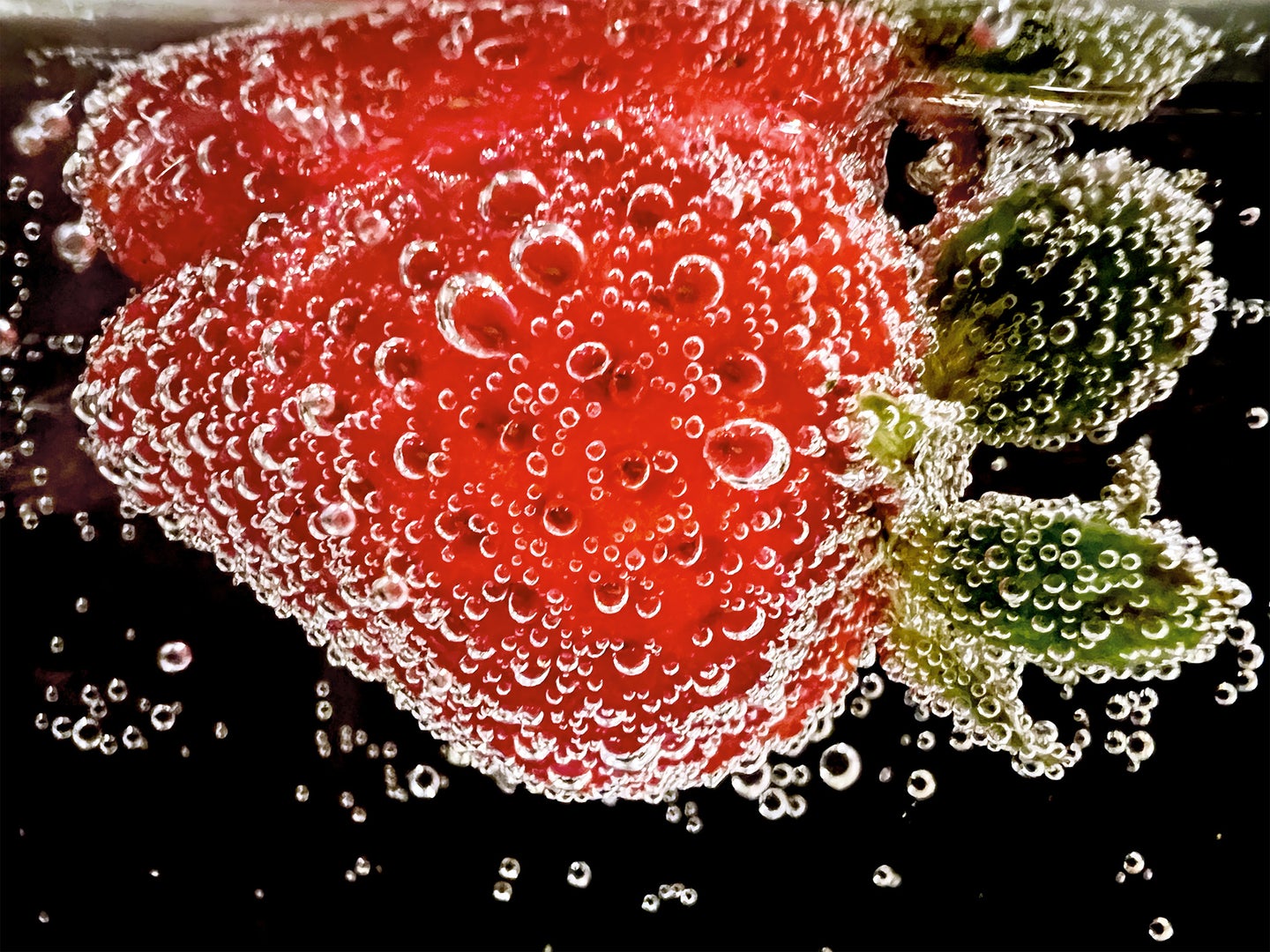 Earlier this week, Apple announced the winners of its Shot on iPhone Macro Challenge, and the results are a glittering ode to the molecular details that render ordinary life an extraordinary occasion.

About the Shot on iPhone Macro Challenge

In January, Apple put out the call to owners of the iPhone 13 Pro and iPhone 13 Pro Max to participate in the challenge. Celebrating the company’s most advanced camera system, the competition encourages people to get up close and personal with their world. Appel’s macro mode delivers impressive photographs with a minimum focus distance of two centimeters.

“The beauty of macro photography is its ability to turn the ordinary into the extraordinary,” Apple said.

The company assembled 10 judges comprised of Apple team members and award-winning photographers. They are content creators, commercial photographers, product managers, and storytellers who have worked with leading brands and publications, including Burberry, GQ, and National Geographic.

The 10 winners will have their work displayed across Apple accounts, with the possibility of appearing on/in billboards, exhibitions, campaigns, and Apple stores.

Guido Cassanelli took the phrase “one man’s trash is another man’s treasure” to heart with this winning submission.

Cassanelli picked up pieces of sea glass, which could also be seen as litter, and decided to see what he could capture in macro mode.

“It looks like something strange is happening inside the one placed in the center — it looks like amber. I really love that texture,” Cassanelli said.

Flowers sure are splashy from afar, but it’s only up close that one can truly appreciate the unsuspecting intricacy that creates a beautiful bloom.

“The enveloping shape of the petals, accentuated by intense shadows, made me think of a deep cave, ready to be explored; by keeping the point of view inside the flower, I wanted the hibiscus’s natural framing to make us feel fully part of its beauty,” said winner Marco Colletta.

For judge Paddy Chao, the image’s composition and lighting were to be commended.

“I like the composition of this image with the buds surrounded by the petals, like it’s being held and cherished. The light and shadow bring a sense of serenity,” Chao said.

Though incredibly fine, spider webs yield impressive strength and collect water like no other, something noticed by Prajwal Chougule Kolhapur.

“Dewdrops on a spiderweb caught my attention, and I was fascinated by the way the dry spider silk formed a necklace on which the dew glistened like pearls. It felt like a piece of art on nature’s canvas,” Kolhapur said.

Judge Arem Duplessis called this submission “A true example of a simple, graphic, yet beautiful image. The water droplets create these gorgeous little pearls that take on the intricate shape of the spiderweb. Simply stunning.”

A Drop of Freedom

“I adore the shape of the flower; the lower petal helps keep the focus on the middle part, highlighting not just the drop, but the stamen, too. Nonetheless, the picture has a rhythm that is building toward the euphoria of the composition,” said winner Daniel Olah.

The detail and subject matter had Arem Duplessis comparing the photograph to the works of the Dutch masters, who were known for their still life compositions.

“The background frames the flower beautifully and allows those gorgeous reds, greens, and blues to come forward against the rich black. The reflecting water droplet at the center could very well be a tear, as this image seduces the viewer’s emotions,” Duplessis said.

Winner Trevor Collins captured this shot in his home during golden hour—proof that if we look closely, wonder is all around us, even in the seemingly mundane.

“This one instance was during the sliver of golden hour when the sun is shining directly into my window, illuminating all of the tiny cells in each leaf. The leaf depicted is from a fiddle-leaf fig that sits on my desk, where I get to see it all throughout the day,” he said.

Perhaps judge Anand Varma put it best. “Who knew an ordinary leaf could be so intricate? It’s remarkable how a simple backlight can reveal this hidden world of structure and connection that would otherwise go unnoticed.”

For some fizzy fun, Ashley Lee dropped a bright red berry into a vase of soda.

“Using photography to transform everyday items into something more extraordinary is always a fun puzzle that brings out my creativity,” Lee shared. “I chose a strawberry as the subject because I liked how the bright red popped against the black background. The stark contrast focuses your attention on the strawberry and its bubbles, and makes it seem as if the strawberry is floating in space.”

“This photo takes my breath away at first glance,” judge Kaiann Drance said. “The clarity with motion and the brightness of the strawberry really come through so delightfully.”

“This beautiful sunflower caught my attention with its intricate details, including the presence of contrasting colors from the center toward the edge of the petals,” Mondal recalled. “I immediately decided to take the bouquet home and capture the beauty of it.”

The photograph inspired a little wonder in judge Yik Keat Lee, who was also impressed by the composition and texture.

“I feel like the world is my oyster when looking at this photo; the amount of texture in this macro shot is truly stunning, as is using rule of thirds to frame the flower and get the audience to ponder what is beyond the frame. This flower visual draws me in,” Lee said.

Tom Reeves captured his winning shot while on a walk with his puppy on a snowy morning along Riverside Park in Manhattan.

“As she marveled at her first snow, I was able to capture the ephemeral latticework of this tiny snowflake as it landed among the threads of her many honey-colored curls,” Reeves said.

Kaiann Drance marveled at the structure of the snowflakes, likening them to jewelry.

“Is this real, or are those small jewels? The snowflakes are elegantly captured with the detail from macro, and the strands of hair look like spun gold.”

“This is nature encapsulated,” Jirasak Panpiansin proclaimed. “A world of beauty and wonder made minuscule.”

When photographing, Panpiansin was drawn in by the organic geometry of the leaf’s veins, made intensely clear by the sun.

“This is such an inviting image,” said judge Della Huff. “I love the soft textures and rich greens, and the reflection and magnification in the water droplet really draw the viewer in.”

Hojisan serendipitously photographed this flower in hopes of capturing the moment the sun kissed it—and it was a success.

“As I moved my iPhone closer to the flower, it automatically turned on macro mode, and the details of the petals were brought into the fullest,” Hojisan remembered. “A few moments later, wind came and blew the petals away. Even though the blossom was short, I still captured the highest moment of a tulip’s life, which is a gift from nature.”

Judge Apeksha Maker had plenty of reasons why this was a winning entry, citing Hojisan’s mastery of light as one.

“This photo is nothing short of a painting. What catches my eye instantly is the high dynamic range of the iPhone that smoothly evens the harsh and soft light. There is a beautiful harmony in the petals, making it so abstract. Seen from a distance, one wouldn’t be able to recognize the subject. What completes the image is the ombré colors and fine lines on the petal so crisply captured.”

A few of our favorite shots

Drops of Palms on Palms

We were drawn to the playful way Aly Brown depicted the palm trees outside a window. Thanks to the water droplets, they are suddenly miniscule, upside down, and popping up in multitudes—a fresh, fun way to see an ordinary scene.

Let’s just say this vibrant capture will have us seeing our food in a whole new light.

Critters and crawlers may usually draw reactions of disgust and fear, but Bruno Boni de Oliveira’s shot proves that they can be pretty darn cute.