How to travel with film by land and sea

Everything you need to know before road tripping, pleasure cruising, or riding the rails with a film camera. 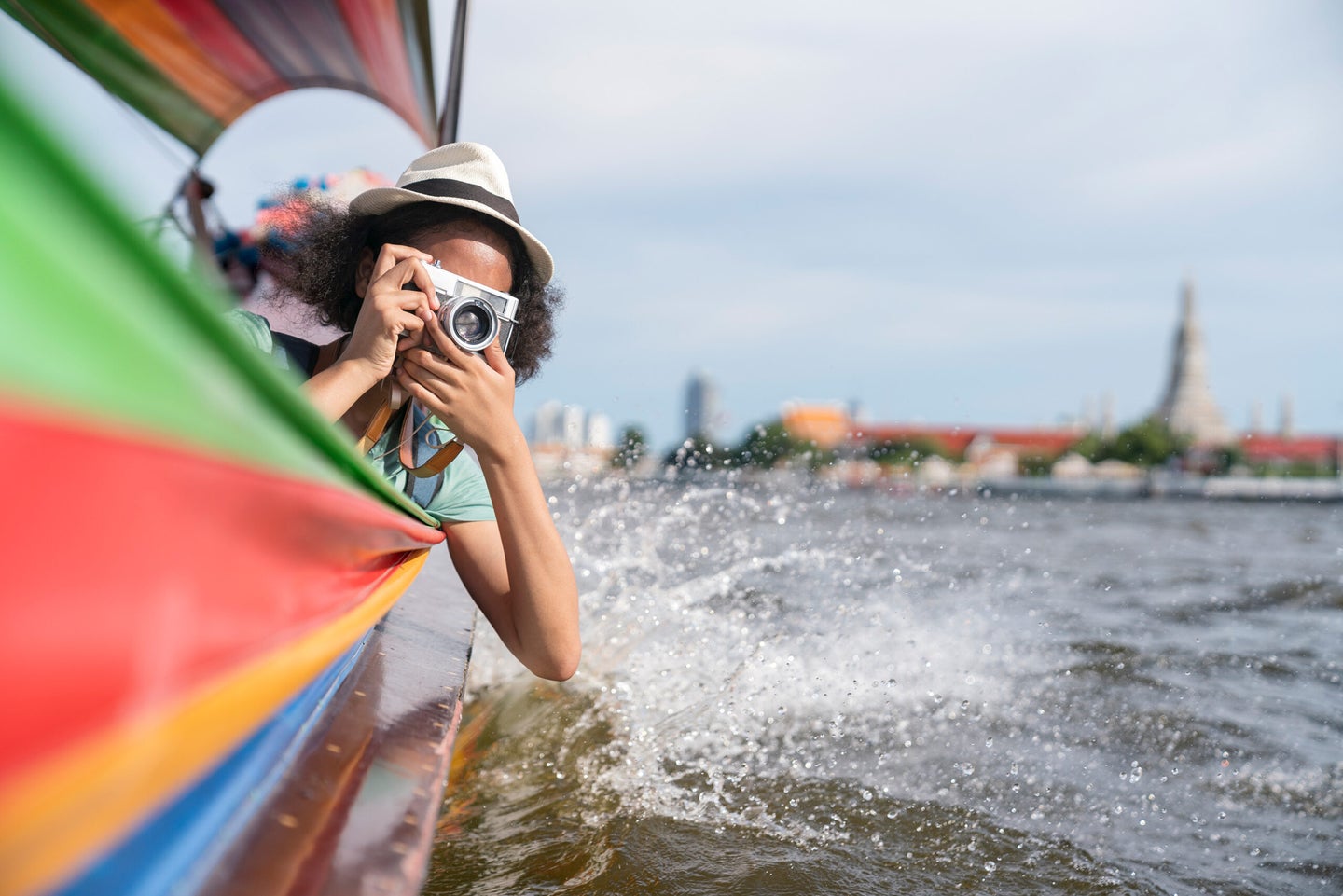 Welcome to part three of our series on traveling with film and analog cameras. In previous installments, we covered general guidelines for traveling with film as well as air travel with film. In this article, we’ll talk about travel by car and train, both of which are particularly film-friendly; and traveling by water, which requires a bit more care.

Traveling with film by car

Car travel is great for film photography, as you’ve got plenty of space to bring all of the gear you want, and unlike air travel, you don’t need to worry about sending your precious film through airport scanners that could potentially damage it.

Your film and film cameras will be fine just about anywhere in your car; however, film prefers cool and dark conditions, and if you can maximize those, all the better. Avoid packing film or film cameras where they will be in direct sunlight, such as near windows or under hatchback tailgates. If possible, cover your gear with a towel or blanket to protect it from the sun.

Some cars have “hot spots” in their trunks: Hybrids and electric cars may have batteries or motors that warm the trunk floor, while mid- and rear-engine cars may have front-mounted radiators that bake the contents of their frunk (front trunk). Before traveling, take your car for a lengthy drive, then feel around your trunk to check for hot spots.

Related: 5 reasons you should develop your own film

If in doubt, keep your film and cameras inside the cabin; if it’s comfortable for you, it’s probably comfortable for your film. If it’s cold out, avoid putting film on the floor, as this is where the heater ducts blow hot air, as well as door pockets, which may be significantly colder than the rest of the car. As with digital, it’s a good idea to keep a loaded camera in the center console so it’s easy to reach. Avoid putting larger cameras in door pockets or near the edge of the trunk where they might fall out when the doors or tailgate are opened. (Yes, we’ve made that mistake before. Several times.)

When you reach a destination it’s a good idea to bring your analog gear along with you rather than leaving it in a locked car, where it could be at risk of theft and/or temperature extremes. If you do need to store equipment/film in your vehicle, be sure to keep it out of sight—a locking trunk or glove box is your best bet.

Traveling with film by train

Like car travel, train travel is fairly benign for film. In the US, Amtrak’s security procedures are primarily focused on verifying the ID of travelers. TSA has performed some luggage inspections in the past, but aside from sharp objects (i.e. scissors to cut film leaders), there is little film equipment that should cause a problem.

Amtrak does have some restrictions on photography; they don’t want you taking pictures of other passengers or railroad personnel. Railroad staff may be overly cautious about photography on station platforms, as many train buffs have wandered into the path of an oncoming train while trying to get that perfect shot. If you’re using your camera on the platform, be hyper-aware of your surroundings and avoid platform edges. Don’t ever go near railroad tracks to get a photo! Trains are significantly wider than the tracks they run on, and many modern trains are electric or pushed by locomotives at the rear, which means you may not hear them coming.

If you are checking bags with cameras, bear in mind that some Amtrak train routes are run by buses, which means your luggage will be crammed and stacked into the underfloor bays. On the trains themselves, carry-on luggage that does not fit on overhead racks may have to be stored in common areas that are out in immediate sight and accessible to all. We recommend keeping cameras in small carry-on bags that will fit near your seat. Amtrak’s long-distance coaches have lots of legroom and their sleeping cars offer plenty of personal space, so there should be no shortage of room for your gear.

Travel with film by sea

Cameras and film have two enemies on the water: The water itself and the salt air (if you’re on the ocean). You need to protect your gear from both.

Small, fast boats can generate a lot of spray and give your camera a good soaking. A weatherproof camera like the Pentax IQ Zoom WR should be fine, as will a fully waterproof camera like a Nikonos or a Canon Sure Shot A-1. Obviously, sea spray should be avoided at all costs for non-waterproof cameras, as the salt water can find its way into crevices and cause fatal corrosion. Consider bringing a waterproof disposable like the Kodak Water & Sport or Fujifilm Quicksnap Waterproof—and definitely bring one if you’re planning to swim.

Dropping your camera into the water is a bigger hazard than you might imagine. Your author’s grandfather, an experienced sailor, put wrist straps on every tool he had on his boat. His rule was “Tie it to your if you don’t want it to go into the drink.” Whether you’re on a small boat or a big liner, every camera should have a wrist or neck strap. Neck straps can be used the traditional way or securely wrapped around your wrist. Remember, all it takes is one good jostle to knock your camera out of your hand and into the water.

If you’re traveling on saltwater, opening the camera exposes its innards to salt air. A little bit won’t do much harm, but it’s best to minimize exposure just to be safe. Film changes are best done indoors or below decks. Same for lens changes, but if you must change lenses on an open deck, take your time and be deliberate. Remember, a dropped lens will roll—likely somewhere inaccessible, including straight to Davy Jones’ Locker. Always assume you are in imminent danger of dropping your gear into the water (because you are).

As with all forms of travel, consider leaving your best gear home and traveling with cameras that can be repaired or replaced if something bad happens. Happy travels!