How to travel with a film camera

Thinking about bringing your film camera on an upcoming trip? Here's what to consider and how to prepare for traveling with film in 2022. 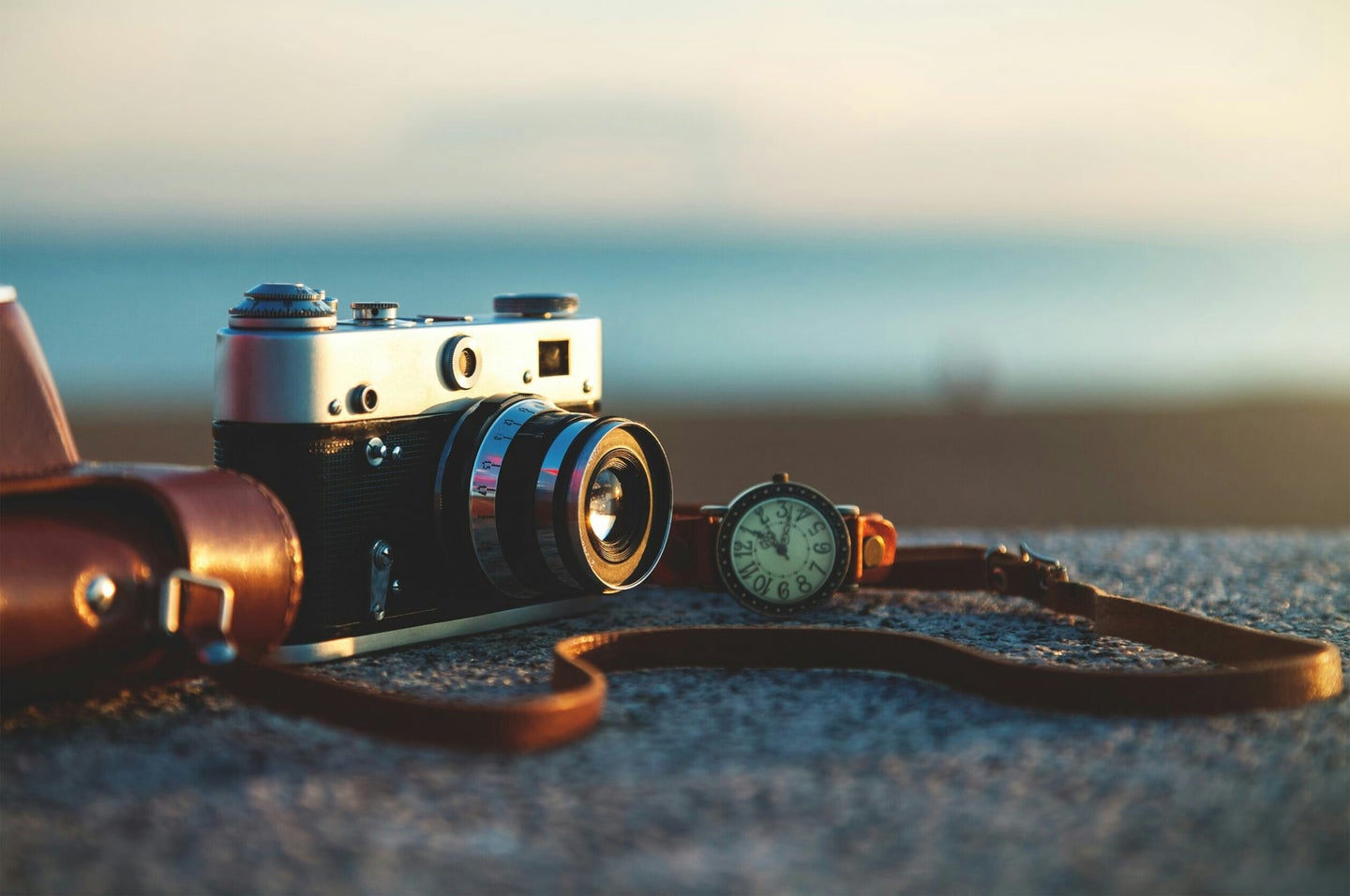 There was a time when traveling with film cameras was a no-brainer: Nearly all cameras used film, and you’d find all the support you needed almost anywhere you went. Today, the rise of digital photography and changes in transportation security make traveling with film gear more of a challenge.

The Perils of Traveling with Film

We love film and hate to speak ill of it, but the truth is that shooting travel photography on analog is not a sure thing. Unseen camera faults and mistakes in technique and/or handling can cause problems with your photographs, and unlike digital, you may not realize your photos didn’t come out until you get home. There’s also the potential for damage or mistakes in processing.

Does this mean you should avoid film photography for travel? Absolutely not! Film gives its own special look to travel photos and we wouldn’t miss that for the world. However, there’s nothing wrong with doing what our film-only forbears couldn’t, which is to use modern technology as a backup. If you’re facing that once-in-a-lifetime photo opportunity, there’s nothing wrong with snapping an extra shot on your phone or a digital camera, just in case.

Traveling with film: What film to bring

Back in the day, no matter where you were headed, you could almost always find film—and often good-quality processing—at your destination. Not so today, so modern film photographers will most likely be carrying both new and exposed-but-unprocessed rolls. This is particularly tricky with regards to air travel, which we’ll cover in Part 2 of this series.

If you’re traveling with film, you’ll want to take plenty with you; running out of film on a trip is never fun. What kind of film should you bring? We prefer to stick to film stocks we know and like. We’ve experimented with unfamiliar emulsions while traveling, only to get home and find that new-to-us film didn’t give us the look we were looking for. Our recommendation is to experiment at home and travel with film you know.

It’s a good idea to check the weather conditions at your destination to help determine what speed film you’ll need. If it’s bright and sunny, we’ll pack mostly ISO 100 film with a couple of rolls of ISO 400 in case the clouds roll in. If we’re expecting inclement weather, we up the proportion of faster film. For indoor photography, many filmies pack some ultra-high-speed film (such as Delta 3200 or T-Max 3200) or a flash. Another option is to shoot ISO 400 or 800 film at 1600 and push-process it. (Be sure to note which rolls need pushing!)

It’s worth noting, though, higher-speed films are more susceptible to the negative effects of airport X-rays. And if you’re bringing along film faster than ISO 400, we recommend carrying it on board (this goes for all film, actually) and requesting a “hand inspection” at security. We’ll cover this more in part 2.

Alternatives to bringing your own film

If you’re traveling to a large city, you may be able to buy film locally. Do a little Googling and be sure to call or email ahead to make sure local stores have adequate stock of your film(s) of choice. If you regularly mail-order film, you may be able to get your mail-order house to ship film to your lodgings; be sure to call ahead to your hotel to make sure they can receive packages for guests. Alternatively, you can mail film ahead to your digs. This method isn’t foolproof—packages do get lost or delayed—so it’s best to bring a couple of rolls with you, just in case.

If you use a mail-order lab for processing, consider mailing your exposed film to the lab directly from your trip. That’ll save some bulk in your luggage (and an X-ray inspection if you are flying).

The case for bringing more than one camera

Digital cameras offer variable ISO settings and can switch seamlessly between color and B&W, but film cameras can’t do that, and mid-roll film changes are time-consuming (and difficult or impossible on some auto-wind cameras). That’s the reason why, back in the film days, avid photographers frequently traveled with a second camera (or third). One camera might be loaded with color film, the other with B&W, or one with slow film and one with higher-speed film. If you travel with a second camera, we recommend keeping that extra camera unloaded until you know what you need it for, to provide you with extra flexibility.

If you’re a compact point-and-shoot photographer, you’re in great shape—after all, P&S compacts were designed with travel photography in mind. A compact camera with a zoom lens will give you the most flexibility, but the 35mm lens fitted to many fixed-focal-length cameras works nicely for travel snapshots.

Most point-and-shoot cameras are made to withstand a little foul weather, but if you are concerned about getting seriously rained on (some vacation!), consider a “weather-resistant” camera like the Pentax IQ Zoom 90 WR. There are other fully-waterproof compacts like the Canon Sure Shot A-1, but if underwater film photography is on your agenda, consider a one-time disposable camera like the Kodak Water & Sport or Fujifilm’s Quicksnap Waterproof—that way you don’t have to worry about your hard-to-replace camera getting damaged.

SLRs give you more creative control over your photos, but they do add bulk, which can slow you down while traveling. SLRs come in all shapes and sizes, and we recommend smaller ones for smoother travel. Older manual-wind cameras (particularly the Olympus OM-series and Pentax M-series) and later-model plastic-bodied SLRs (like those from Minolta and Canon) are among the lightest and easiest to travel with. Pro-level cameras like the Nikon F4 are bulky and heavy.

But isn’t pro-level gear best for travel? Not necessarily: A once-in-a-lifetime trip might seem to warrant your best film equipment, but there’s an argument to be made for leaving your nicer cameras home. Remember, with film—and unlike digital—it’s not the camera that determines image quality, but rather the lenses and the film stock. For travel, consider taking older bodies that you don’t mind getting knocked around a bit, and which will be easier (and cheaper) to replace if they get lost or stolen.

If you’re bringing a second camera body, it should be one that is lens-compatible with your primary body so there’s no need to bring a second set of lenses. Your backup camera need not be anything fancy or expensive. A $20 Nikon N65 makes a great backup for your Nikon F5 or N90s and takes up little extra space in your camera bag.

What lenses should you bring? If you’re using an autofocus SLR, a pair of zoom lenses in the 24-70mm and 70-200mm range should meet most of your needs. For manual-focus SLRs, the standard wide/normal/tele “prime trifecta”—28mm, 50mm, and 135mm —will suit you well. Again, consider the value of your equipment and the difficulty of replacing it in the event of breakage or theft. We’d much rather risk a $25 Vivitar lens than a $250 Nikon lens. Consider fitting a UV filter to all of your lenses to protect them from damage.

Traveling With Other Types of Film Cameras

35mm rangefinder cameras give you the portability of a compact, and most offer the creative control of an SLR, so they’re great travel companions. The only thing that gives us pause is their value: Some of us find it hard to relax and enjoy our trip while worried about damaging or losing our $5,000 Leica.

Point-and-shooters might want to consider a bridge camera, which offers the creative control of an SLR in a more compact package. Their wide-range zoom lenses make them great for travel, and they offer a variety of automatic, semi-automatic, and manual modes.

Instant cameras are great for snapshots, but not so great for landscape or architecture photos—and with the high cost of film, instant travel photography can get very expensive very quickly.

What about medium- and large-format gear? A small TLR like the Yashicamat or Mamiya 645 takes up only a little more space than a bulky 35mm rig, but bigger cameras like the Mamiya RB67 and Pentax 67 can really weigh you down, as can large-format cameras, which generally require a tripod. We tend to reserve the bigger gear for trips by car. If you do take large and expensive gear via commercial travel, be sure to keep it with you and avoid checking it at all costs.

What Else Should You Bring With You?

If you have extra space in your film kit, here are a few items you should consider bringing, in order of importance:

We love traveling with film gear because it presents so many opportunities to take great photos, but we try to avoid seeing our entire vacation through a camera lens. Always be on the lookout for good photo opportunities, but make sure you take time to enjoy and experience the sights with your own senses.