How to shoot better firework photos with your smartphone

You don't need a fancy-pants camera to capture awesome firework pics this summer. 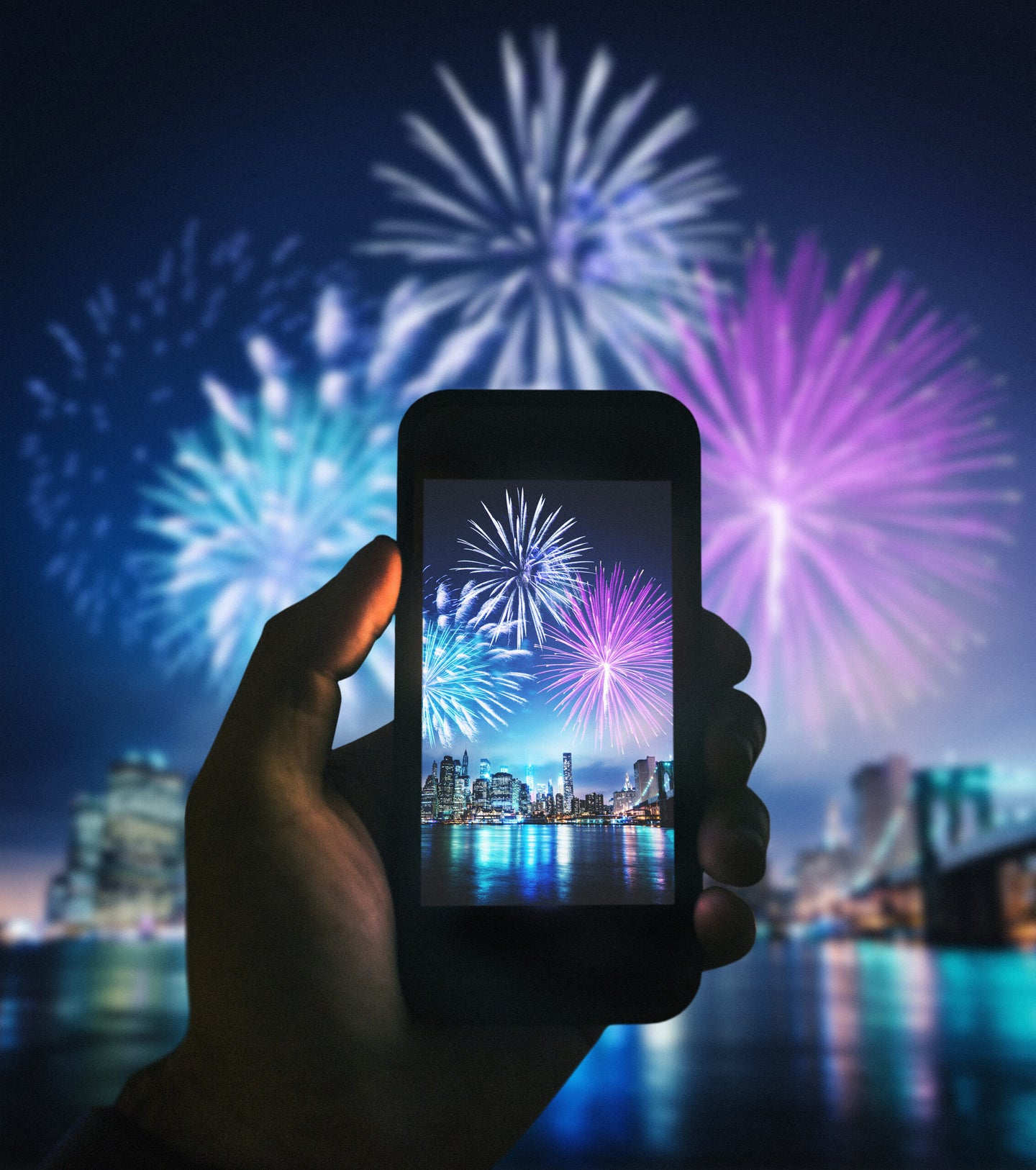 If you’ve ever tried to snap photos of fireworks with your phone, you probably weren’t very happy with the results. Thankfully, with a bit of care and the right tools, you can get much better images.

Use the right lens

While it’s tempting to zoom in when you’re taking photos of things like fireworks, it’s a bad idea. Modern smartphones have different lenses, but also different sensors. Take the iPhone 13 Pro. It has three 12-megapixel cameras: the main wide-angle, an ultra-wide-angle, and a telephoto. All three have very different specs.

So, whatever smartphone you use, the best camera to use is normally the default one. (If you want to dig deeper, check the specs.)

Your smartphone is probably great at automatically snapping photos in most situations, but night-time fireworks may not be one of them. To get the best results you need to be able to set both the shutter speed and ISO.

The exact settings will vary depending on your situation, but some good values to start with are:

Oh, and make sure the flash is turned off.

Some smartphones have default camera apps that allow you to manually adjust settings. If not, you have plenty of options. On iPhone, check out Manual ($3.99) and ProCamera. ($14.99). We also love Halide Mark II (but at $12/year after a free trial, it’s harder to recommend if you don’t take a lot of smartphone photos). On Android, Open Camera (free), Camera FV-5 ($3.95), and ProShot ($4.99) are all also worth checking out.

With shutter speeds between one and five seconds long, any optical image stabilization in your smartphone is going to be working pretty hard.

If you have a smartphone tripod (we love Joby’s GorillaPod), it’s a good idea to use it. Otherwise, go with a slightly shorter shutter speed (say, one or two seconds), hold your smartphone close, and brace your arms against your torso.

Get set up in advance

If you’re standing around waiting for the fireworks to start (or even better, are involved in getting the display going) then get your smartphone prepped and ready to go ahead of time. Work out where you want to stand, where you want to rest your tripod (or balance your smartphone), and where you need to focus. This is also an opportunity to dial in your settings and try out a few different shutter speeds to see how they work with the environment you’re in.

It’s unlikely you’ll get an amazing firework photo the first time you tap the shutter button. The tenth, though? Much more likely!

While you won’t be able to use burst mode if you have your shutter speed set to a second or slower, you can still keep tapping away at the shutter button yourself. If you find this is adding camera shake, consider using a short shutter delay.

The more photos you shoot, the better you’ll get at timing them, so don’t be afraid to experiment! Depending on your shutter speed, you will need to take your photo sometime between the firework launching and its initial explosion, to get the best results.

Here at PopPhoto, we’re big believers that a photo isn’t done until you have edited it. Open the image in your favorite editing app (even if it’s Instagram), increase the saturation, and maybe the contrast. Crop it so it’s well framed and you’re good to go!