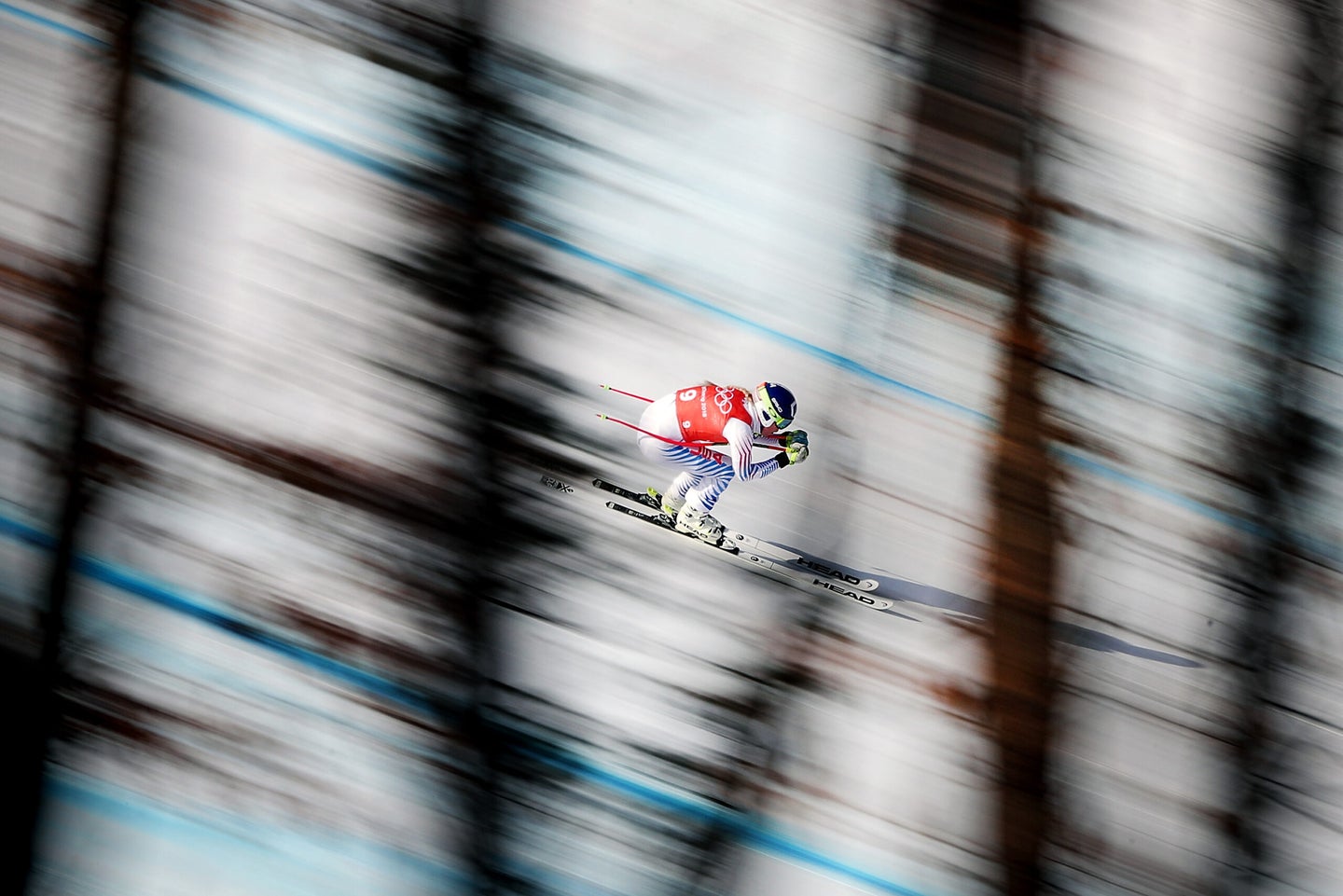 Getty photographer Tom Pennington has been documenting alpine ski racing for over a decade and is currently in Beijing, China to capture the action at the 2022 Olympics. While some photographers bounce around between events at the Olympic Games, shooting alpine skiing requires a unique skill set—being confident enough on skis to be able to make your way down the same course as the competing athletes.

“I don’t want to oversell it, but I’m comfortable on skis,” Pennington says. “It’s an incredibly challenging sport to cover, and I think that’s one of the reasons I’m so interested in it.”

In the lead-up to competition Pennington spoke to us about what it’s like to cover the sport for Getty, why seeing the course beforehand is crucial, and what gear he’s brought along to capture athletes in Beijing.

How is shooting the Winter Olympics different from the Summer Games?

The Winter Olympics has a whole different set of issues, primarily dealing with the extreme cold.

My primary function here at the Olympics is to cover alpine ski racing and when we got on the mountain this morning it was minus seven degrees Fahrenheit, with 15 to 20 mph winds. It was nasty cold. To prepare for that, it’s a lot of cold-weather gear, a lot of layers, a mix of synthetic jackets and down jackets, and nice Gore-Tex outerwear. We also have some real specialty products that we use, like battery-heated insoles for my ski boots which have a little heating pad on the ball of your foot in the toe area. They’ll run six to seven hours, so that really helps keep my toes warm when we’re standing around for hours. We have disposable hand warmers too. I use five to seven of those per day to keep my hands warm and to keep spare camera batteries warm—the extreme cold will zap lithium batteries—if the cameras go dead, we’re just stuck on the mountain and we can’t shoot.

Why is it important for the Getty team to arrive onsight so early?

Related: All the gear sports photographer Nick Didlick is bringing to the 2022 Olympics

We have 60-plus people in total. The tech team comes into all of the venues and confirms the technology side of the events, or venues, are set up so that we have ethernet cables to plug our cameras into and that the WiFi networks are operational. I’ve been here for nine days and we still haven’t had our first day of competition, but we’ve had two days of training. In the other six days, we’ve been going to the mountain to scope the course out. That’s been especially important for this Olympics because no one has ever been on this mountain. Usually leading up to an Olympics we will shoot a test event, like a World Cup race the year prior, sometimes two years prior, but those events got canceled due to COVID. The racers have never been on this mountain and photographers have never been on the mountain, so everyone is running blind. We needed extra time to be here, to get up on the mountain, to scout out, to find the perspective that we need to capture epic ski racing.

Can you explain a bit more about the importance of getting on the mountain before the competition begins?

For ski racing, it has to do with us finding the right terrain within the entire racecourse—where the skiers will be in a real dynamic position. We don’t necessarily want them in a position where they’re upright. We want them in a real strong, dynamic position. Oftentimes, with ski racing, where they’re setting the edges of the skis and turning really hard, that’s where we get the real dynamic looks with the snow spraying off of the skis—and also the big jumps. This course is loaded with big jumps. It’s really an amazing course.

How many other photographers are on the course at one time?

In this Olympic environment, there are 30 photographers that are allowed on the course to photograph. And out of those 30 photographers, there are roughly five positions that we can choose from that are officially approved. We have the ability to go investigate around and find another position on-course that we feel might make for good photos. We can propose that to the photo chief for the sport, and then they will take that to the governing body and decide if it’s a safe position. If a ski racer were to crash, would we be out of the way? The speeds we’re dealing with, the racers go over 85 mph downhill, and when they crash—you don’t want to be anywhere in the way of that.

Are all of these positions determined before the competition begins?

Today, we have five positions on the course, but by the time we get into day three or four of racing, there will be the other positions that we will find. It always evolves, especially with this course being brand new. We just haven’t seen it, and so it’s going to take us a while to find all the mega spots on it. But we have a couple of really good spots already.

Not having previous access to the mountain was in part due to COVID-19, what else has the pandemic changed about documenting the 2022 Games?

We are very disciplined in how we move around, and in who we are around. We are in a true closed-loop system. We don’t have the ability to go out and about and interact with the general public. Where normally, during an Olympic Games, we do have that ability to move around freely. With this one, we have dedicated transportation and we have to stay within that closed-loop system. Other photographers during the games would typically bounce around to several different venues. That doesn’t really apply to my role because covering alpine ski racing is a very specialized skill set. Primarily, first and foremost, you have to be able to ski the course to get into position. We can’t just rotate any photographer into that role. In addition to being able to shoot ski racing, I also know how to ski.

There are also not going to be any fans for these games. We saw that also in Tokyo for the Summer Games. So that part is just the way things are now, so it won’t be as unusual, but it is still a real shift from the whole fan experience and mood and atmosphere during the Olympic Games.

Does the lack of fans change the way that you are shooting?

For the straight-up action, it really doesn’t. Mainly because if fans were in attendance, they would not be up on the course. They would just be at the finish line. Obviously, we would document that and shoot cheering fans and just the atmosphere there, but we don’t have that. It does shift how we shape our coverage, but it is what it is. We try to just document what’s there.

What’s the pace of your day like once the Olympic Games officially begin?

Our schedule will stay the same pretty much every day—whether it’s a training day or a race day. We’re up at 5:30 am, breakfast at 6 am, and then we have a car that picks us up at 7 am. We go straight to the mountain, and we’re on the course by 8:30 am. We come down between 2:30 pm and 3:00 pm and then travel back to the hotel. It’s a pretty set schedule and tempo with ski racing.

What gear do you have with you to document the races this year?

Once you are in position on the mountain what elements need to come together for you to make an epic race shot?

There are a lot of different factors. We’re always paying very close attention to the skiers’ form, how they come off a jump. Are they out of control? Are arms flying? That kind of thing. And sometimes it happens so fast. Fortunately, shooting digital, we’re able to see right then and there that, yes, we did get it. I’m looking for nice light, a clean background, and good dynamic action from the ski racer. When those elements come together you can create a really nice ski racing photo.