This is what it takes to shoot from a helicopter. 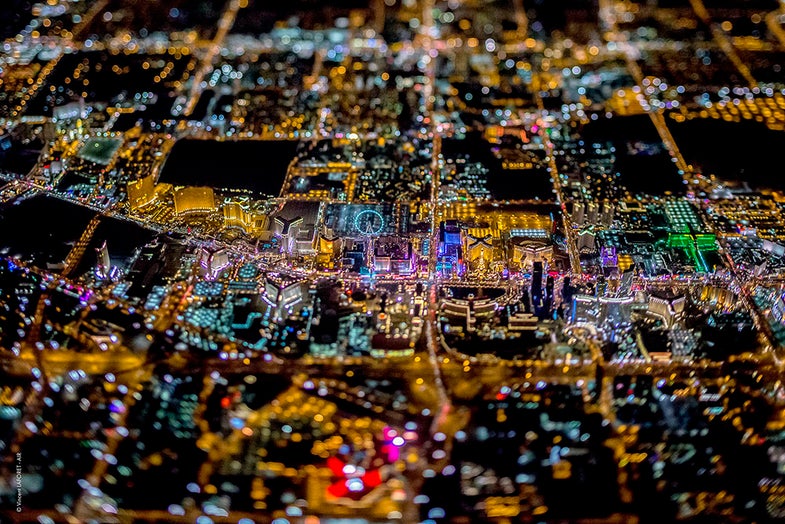 Aerial photographer Vincent Laforet says he has spent several hundred hours of his career shooting out of helicopters. A month ago, Laforet was hanging out of the side of a heli to capture beautiful nighttime images of New York City from 7,500 feet. Those photos inspired Laforet to launch a series called Air, and this morning he released a new set of images on Storehouse that were shot thousands of feet above the bright lights of Las Vegas.

We spoke to Laforet about his go-to gear when he is hanging out of the side of a helicopter and the challenges that come with shooting at night.

When did you start shooting out of helicopters?

It began about 10 years ago when I was working for the New York Times. I fell into becoming the person they would call anytime they needed an aerial photograph. I’ve found that your career finds a way to tell you what to do. You have these grandiose plans, but then reality strikes and the world tells you what you should be doing.

Las Vegas is the second city that you’ve photographed for your ‘Air’ series—what are the challenges of aerial shooting at night?

The best description of a helicopter I’ve ever heard of is that it is 100,000 pieces of metal trying to shake themselves loose from one another—it is not the most stable platform to shoot from. During the day it is generally recommended that you double your focal length in terms of shutter speed. If you have a 500mm you should be shooting at 1/1000 sec or faster. That’s fine with full sunlight, but at night it is impossible. Until about a year or two ago, when these cameras with CMOS sensors that can produce relatively clean files at 3200 or 6400 ISO [started being released], you actually could not shoot at night from the helicopter—it was just too much vibration.

How much does the weather affect your shooting?

Not as much as during the day. You don’t care if it is a little cloudy—it can be kind of cool. You’re not looking for the quality of light that you would during the day, but obviously turbulence and strong airflow or winds are not advisable. The helicopter has to fight the wind and it vibrates a lot more. You’re looking for calm skies, but you want a little bit of wind because it clears out all the fog and the smog for good visibility. The warmer the better because the higher you go the colder it gets. When you get to 12,000 feet you lose about 20-30 degrees from what you had on ground level.

What gear are you using on these shoots?

Camera bodies that are very sensitive to low light and can produce an incredible image. We are using the Canon 1DX and a variety of medium format backs from Leaf and Phase that are 50 MP. Very bright lenses, f/2 or down to f/1.2—2.8 is the darkest I can get away with. I also use a gyro from Kenyon Labs, two gyros mounted to the base of the camera with quick release plates so that it further stabilizes the camera.

Is there non-camera related equipment that is crucial when shooting from a helicopter?

We go up with about 50 carabiners and a harness so that every single thing that we have up there is clipped to me or the helicopter at all times. There is no exception. The biggest thing I fear when people go up in these helicopters is they don’t know that everything you drop from a helicopter becomes a lethal projectile for people below, especially over a city like New York City. There are no loose items. Nothing in your pocket, we are extremely strict about it. People forget, they are comfortable in a helicopter and they stick their head out and their glasses will fly off because there is 140 mile headwind. You have got to be ridiculously careful. We’ve never had an incident and we don’t plan on having any of them.

How long were you in the helicopter to create these aerial shots of Las Vegas?

For two hours, we went pretty high up and pretty far away from Vegas. I think we went 10 or 20 miles away from the city and nearly 12,000 feet—you can’t forget that Las Vegas is 2,000 feet above sea level already, so we went almost 9,000 feet above that. It takes a good 45 minutes to get that high and that far. We went up there with the door closed, because you can go faster. At about 11,800 ft we were ready and I had to slide the door open and lean out of the helicopter. My feet were asleep from sitting there for 45 mins. When you ask what the most important piece of gear is, it is that harness. I have a routine where I test it out every time before we take off and I yank against it to make sure it is working and nothing pops out because if it does, I don’t want to go for an unscheduled flight. I don’t have a parachute. When you are up, 45 mins later in a sea of darkness, total black and you slide that door open and you slide your feet over the edge—it is pretty scary.

What appeals to you about the effect that the tilt-shift lens for these photos?

It has been a lot of fun for me because it makes the whole world look like a miniature. When you are over a city like Las Vegas, which is absolutely surreal looking already, and you put a tilt shift lens on it, it looks like a toy. Vegas looks like a computer chip from the air. It is a relatively modern city and you see these perfect rows of lights and then you add these little Eiffel towers and [themed] hotels on it and it is almost like you are looking at a Monopoly board. It is pretty amazing with a tilt shift.

How do you handle switching lenses when you are up in the air?

Every time I switch lenses, Mike Isler, who has been working with me for about 10 years, he is an aerial technician, a pilot and an assistant as well, I hand him the camera he switches the lens and he checks it. I get the camera back, I check the lens, and we keep going. You do not want to be changing any lenses with an open door of a helicopter. It is very dangerous.

What is your post-production process like for these images?

All these images it is about five seconds in Lightroom: a little saturation, pulling the highlights down and usually pushing it a little more towards the blue to take the tungsten light out. We use the noise reduction software DXO Optics Pro and that is it.

Your aerial shots from New York City were huge when they were released last month—what was it like to witness that and what do you think the appeal of this style of photography is?

It was kind of the weirdest, coolest thing ever. There is a general excitement about these photographs. Probably because there were never images shot like this at night from this altitude before. It was really a legitimate first. People really like to see their world from that perspective. New York City is very intimidating from the ground—you look up and it is tall buildings, but from the air we all feel so much more connected. It is all within grasp.

_See the full set of photos from Vincent Laforet’s Las Vegas shoot over at Storehouse. Laforet will be adding to his Air series in the coming months, follow his journey across the globe as he adds to this project here. _

aerial photography
How to
Las Vegas
Nightscapes
Tips From A Pro