How to photograph fireworks 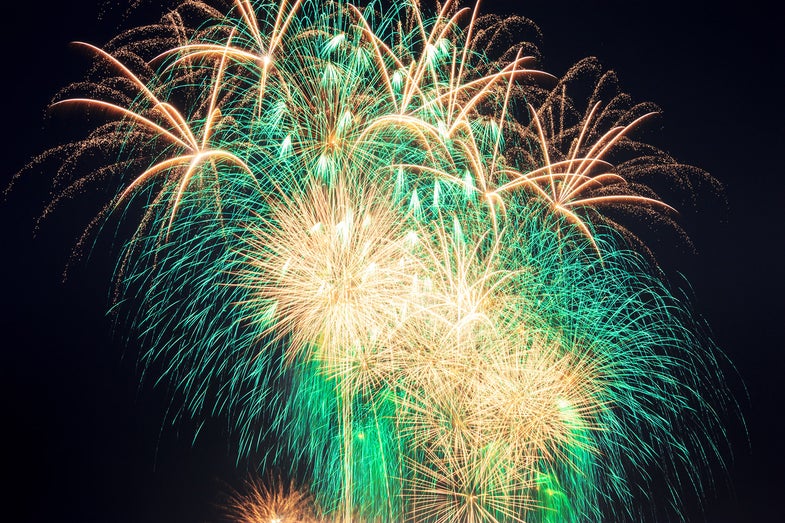 Try a multiple exposure or a long exposure during the fireworks show. Deposit Photos
SHARE

If you can, go for fireworks displays that play out over grand architecture or water for colorful reflections. If possible, get permission to shoot from a tall building for a unique perspective. After learning the rockets’ firing positions, visit the site before the event and choose several shooting locations. On the day of the celebration, set up at a place that’s crosswind or upwind of the display. Otherwise, by the time the finale comes, you’ll be shooting through smoke.

Get more in your frame than just the burst

Look for interesting buildings, trees, or people to place in the lower third of your frame. Adding a human element to your frame can add additional context to your images and tell a more in-depth story.

Switch your camera into manual mode when shooting fireworks

That’s manual exposure (the Bulb setting) and manual focus (set to infinity) while photographing a fireworks display. Kill the flash, the fireworks will be bright enough that you won’t need it.

Try using the High Color Saturation setting, usually found in the camera’s setup menu or shoot RAW, which will give you the most leeway in processing the image in a program like Adobe Lightroom, Photoshop or Capture One. If you are shooting film use a super-saturated slide film such as Fujifilm’s Velvia or Kodak’s E100VS.

Don’t shoot too wide during the fireworks show

Wider focal lengths can capture entire bursts, but then the bursts often appear too small in the picture. Instead, compose to include some foreground material, and don’t worry if you end up cropping out some of the airborne action. Cropping into a burst still leaves a lot of visual impact.

Put more than one fireworks burst in your frame

Play with multiple exposures and long exposures on a tripod when capturing the fireworks show. Either of these techniques will give you multiple bursts per frame.

Don’t be afraid to experiment during the fireworks show

Tap, jiggle or move the focus ring on your lens during an exposure, just to see what happens. Also, after you’ve captured the fireworks, turn your camera to spectators (especially kids) for awestruck facial expressions that can be just as colorful as the action on high.