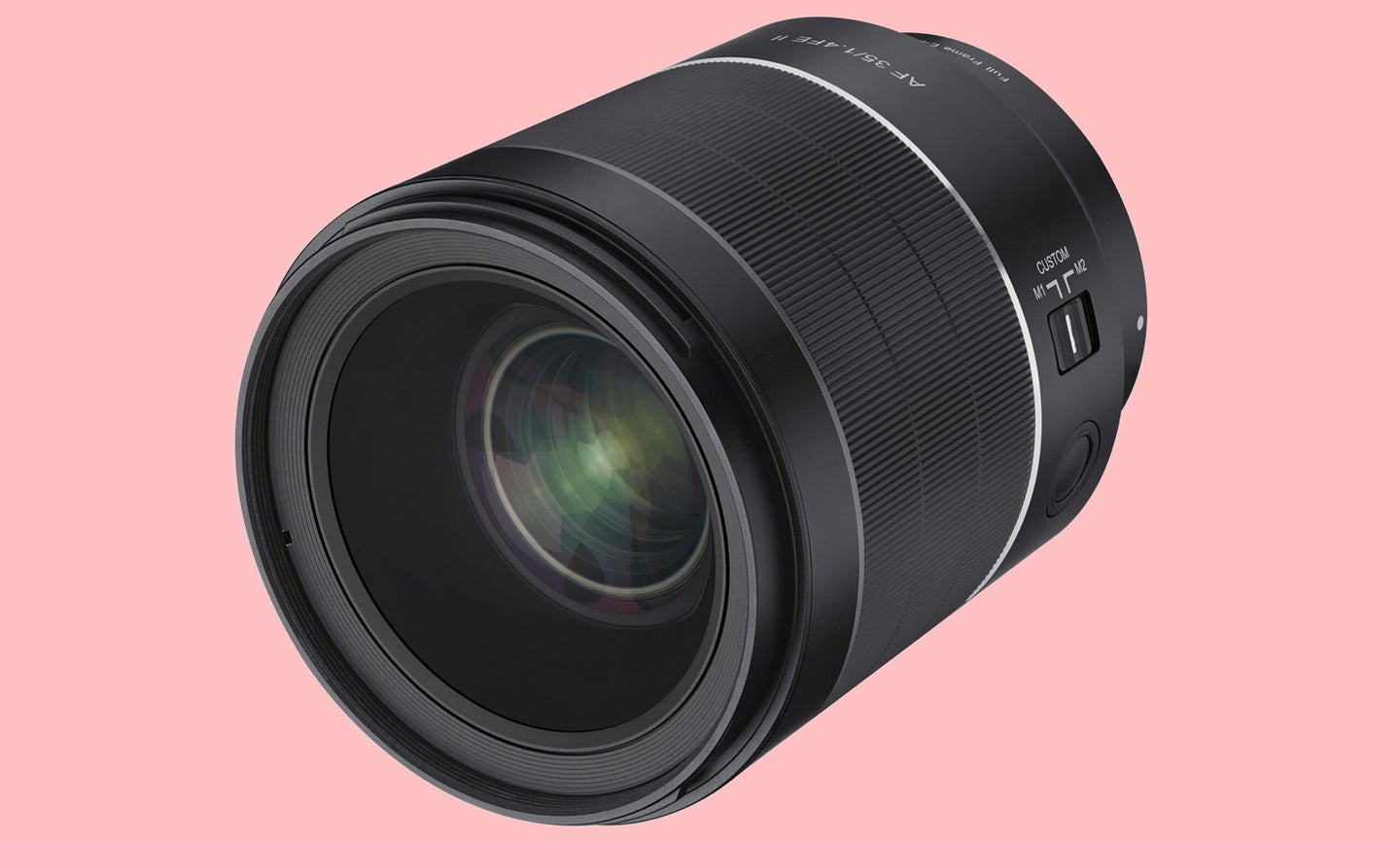 Back in 2016, South Korean optics manufacturer Samyang (also known by Rokinon) made headlines with its first-ever autofocus-equipped lenses, a pair of primes for Sony E-mount. It has since expanded its AF-capable lens lineup considerably. And late last year, Samyang began overhauling those earliest designs, first with an update to the 50mm f/1.4 prime. Now, it has done the same for the 35mm f/1.4, switching AF motor technologies and refreshing the physical design.

A quick glance at Samyang’s product page will confirm that this lens is primarily aimed at portraiture. But thanks to its relatively wide field of view, it could also prove useful for an incredibly wide (pun intended) array of photographic disciplines, from landscapes to street photography (and just about anything in between). And its fast, f/1.4 max aperture should prove useful for low-light work.

The key difference between the new 35mm f/1.4 II lens and its predecessor can be found in their autofocus technologies. Where the earlier lens used a pair of linear ultrasonic motors to drive the AF system, the new model replaces this with a linear stepping motor instead.

Just like the ultrasonic motors, the stepping motor (STM) should be very quiet in operation. Unlike that earlier design, though, the new motor has sufficient torque to allow not just for good stills AF, but also silent and smooth video AF as well.

Of course, you can still focus manually if you prefer. In fact, the chunky manual focus ring encircling the lens barrel has been restyled slightly for an improved tactile response. The new lens also focuses at a slightly closer distance than the old model—11.4 inches vs. 11.8 inches.

Although it is visually near-identical in size to its predecessor, the Samyang AF 35mm f/1.4 FE II is actually narrower by a scant few hundredths of an inch. Its weight has increased a little more significantly though, adding about 0.4 ounces for a final total of 23.2 ounces.

A rather bigger change from the earlier version of the lens—and one which may partly explain the weight gain—is that the 35mm f/1.4 II is now weather-sealed. There are a total of four individual seals: One apiece for all three controls, as well as one at the lens mount. Samyang says this should be sufficient to protect from light rain, snow, or dust.

Two of those three controls are new additions. As well as the existing manual focus ring, there are a pair of customizable controls: a button, and a switch. The button defaults to focus hold, but can be customized to provide other functions as allowed by your camera body.

By default, the switch selects the focus mode, but with Samyang’s optionally-available dock, it can instead be made to control the lens aperture if you’re certain you won’t need to use manual focus. Samyang also says more optional functions will be added to this switch later.

Like the earlier version, the Samyang AF 35mm f/1.4 FE II features a total of 11 lens elements in nine groups. This includes two high-refractive and two aspherical lens elements which the company uses to improve contrast and resolution. Samyang also says that the lens’ Color Contribution Index (CCI) has been improved, meaning that it should yield more neutral, accurate colors than before.

A look at the company’s MTF charts suggests a better performance across the board when stopped down, while wide-open some corner sharpness looks to have been traded off for a more even performance in the center of the frame. This, paired with the increase in CCI, suggests that while the basic optical formula is unchanged, the specific materials used in individual lens elements have likely been tweaked.

A nine-bladed aperture diaphragm should give good roundness to the 35mm f/1.4’s bokeh even if stopped down a little bit. Samyang’s Ultra Multi-Coating, meanwhile, helps to combat flare and ghosting.

Available for preorder immediately, the Samyang AF 35mm f/1.4 FE II lens is priced at $799 in the US market. No expected delivery date has yet been revealed.