It's double the cost of its predecessor, but the replacement for 2015's 135mm f/2.0 is still far more affordable than its E-mount rivals. 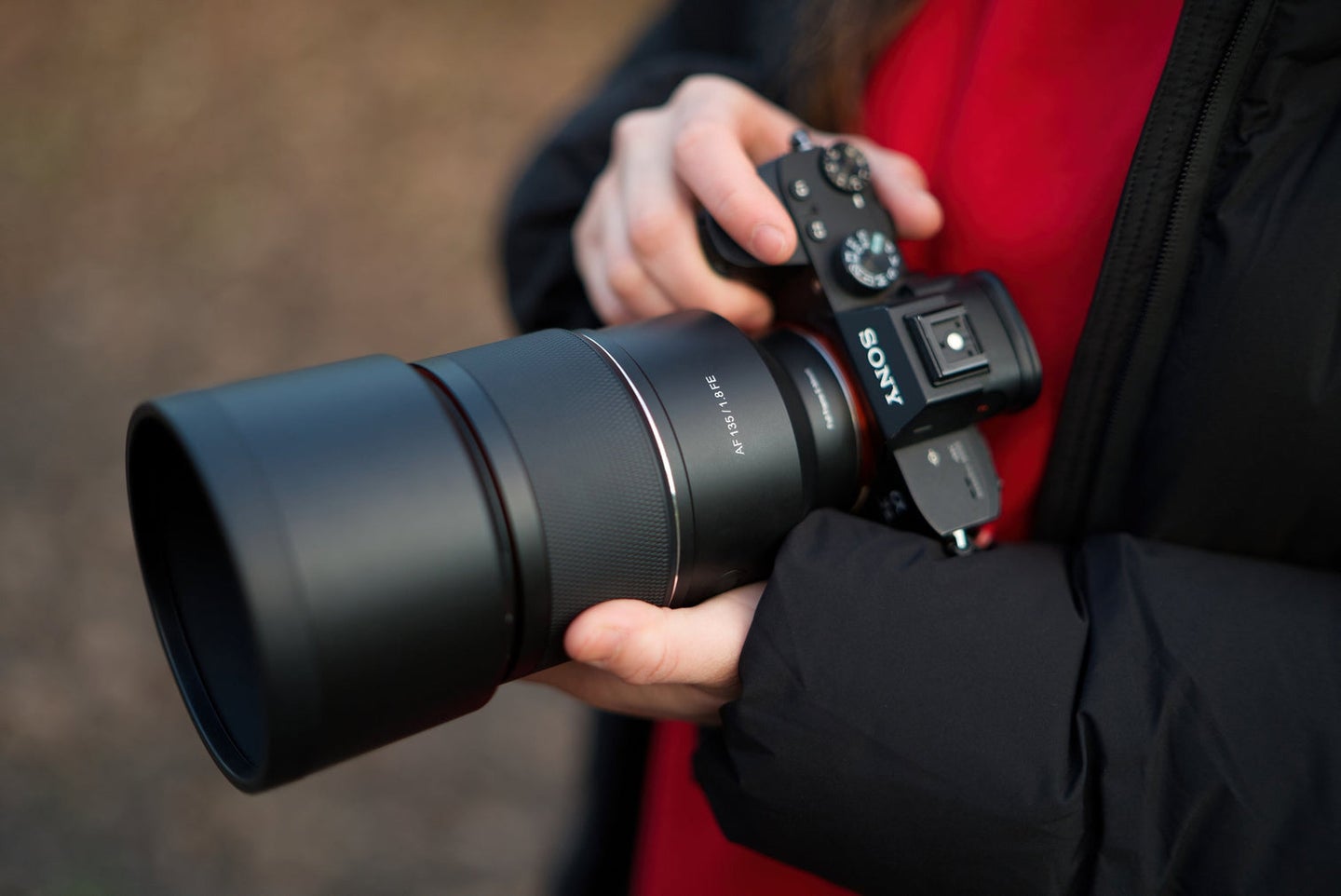 At launch, the lens will only be available for Sony E-mount. Samyang
SHARE

Back in 2015, Samyang (also known as Rokinon) wowed photographers with the 135mm f/2.0 ED UMC, a bright, crisp, and affordably priced manual focus prime that shipped for no less than ten different camera mounts. Seven years later, and in a very different market, it follows up with a ground-up redesign that’s nevertheless a spiritual successor. Meet the Samyang/Rokinon AF 135mm f/1.8 FE.

While nearly double the price of its predecessor and now available only as a full-frame lens for Sony E-mount, the Samyang 135mm f/1.8 is a much more accessible optic than was its entirely-manual predecessor, thanks to both autofocus and electronic aperture control. It’s also smaller, lighter, brighter, weather-sealed, and designed to deliver better image quality—and yet it’s still far more affordable than its nearest rivals.

Like its predecessor, the Samyang 135mm f/1.8 will likely prove of particular interest to portrait photographers looking for bokeh-rific backgrounds and good subject separation. It could also prove handy for sports and nature photography and can offer decent macro performance too.

The lens is built for full-frame E-mount cameras but can be used on Sony’s crop sensor bodies as well. When mounted on an APS-C camera, the 135mm f/1.8 has an effective 203mm focal length and should deliver depth-of-field similar to an f/2.8 lens on full-frame. Rival lenses include Sony’s own FE 135mm f/1.8 GM and Sigma’s 135mm f/1.8 DG HSM Art.

The Samyang 135mm f/1.8 has a significantly more complex optical formula than its predecessor, with 13 elements in 11 groups. Among these, there are six elements with more exotic glass formulations, including three extra-low dispersion (ED), two high-refractive (HR), and one ultra-precision aspherical (UA) lens elements.

By way of comparison, the original 135mm f/2.0 had just 11 elements in seven groups, with just one ED element among their numbers. Both Sony and Sigma’s competing 135mm f/1.8 primes, meanwhile, have the same number of elements as the new Samyang but with one less lens group and fewer exotic elements too.

With an aperture range of f/1.8 to f/22, the autofocus-equipped Samyang gives you an extra half-stop of light in comparison to its predecessor. It also boasts an 11-blade aperture in place of the earlier model’s 9-blade one.

As for its rivals, the Sigma’s 9-blade aperture won’t stop down beyond f/16. The Sony G Master matches the Samyang’s blade count and aperture range exactly.

Samyang’s brand-new AF system is based around a linear stepping motor akin to that of the XD Linear motor-based Sony lens, while Sigma opts instead for a ring-type hypersonic motor. Autofocus range can optionally be limited to function from 4.9 feet (1.5m) to infinity or from minimum focus to 6.6 feet (2m).

Like its Sony G Master rival, Samyang says the lens is weather-sealed, something which differentiates it from the Sigma, which is sealed only at the mount.

In all, there are a total of four controls to be found on the Samyang lens barrel. As well as a multi-function, fly-by-wire ring that defaults to manual focus control, you’ll find a programmable button and two switches near the base of the barrel.

The bottom of these is the focus limiter switch. Above is a switch whose function can be customized using Samyang’s optional Lens Station dock, but which defaults to changing the function of the adjacent button. With the switch in one position, the button provides focus hold. In the other, pressing the button switches the control ring from focus to aperture control.

Up front, an 82mm filter thread is the same as those found on both direct rivals, but a step up from the 77mm threads of the older Samyang f/2.0.

Priced at $999, the AF 135mm f/1.8 FE lens can be preordered immediately under either the Samyang or Rokinon brand names. That’s a healthy $400 less than Sigma’s lens, and less than half the price of the Sony. Delivery is expected to start from March 2022.