Looking to save some cash? Consider these equally-capable substitutes for popular film cameras like the Canon AE-1, Pentax K1000 & Leica M6. 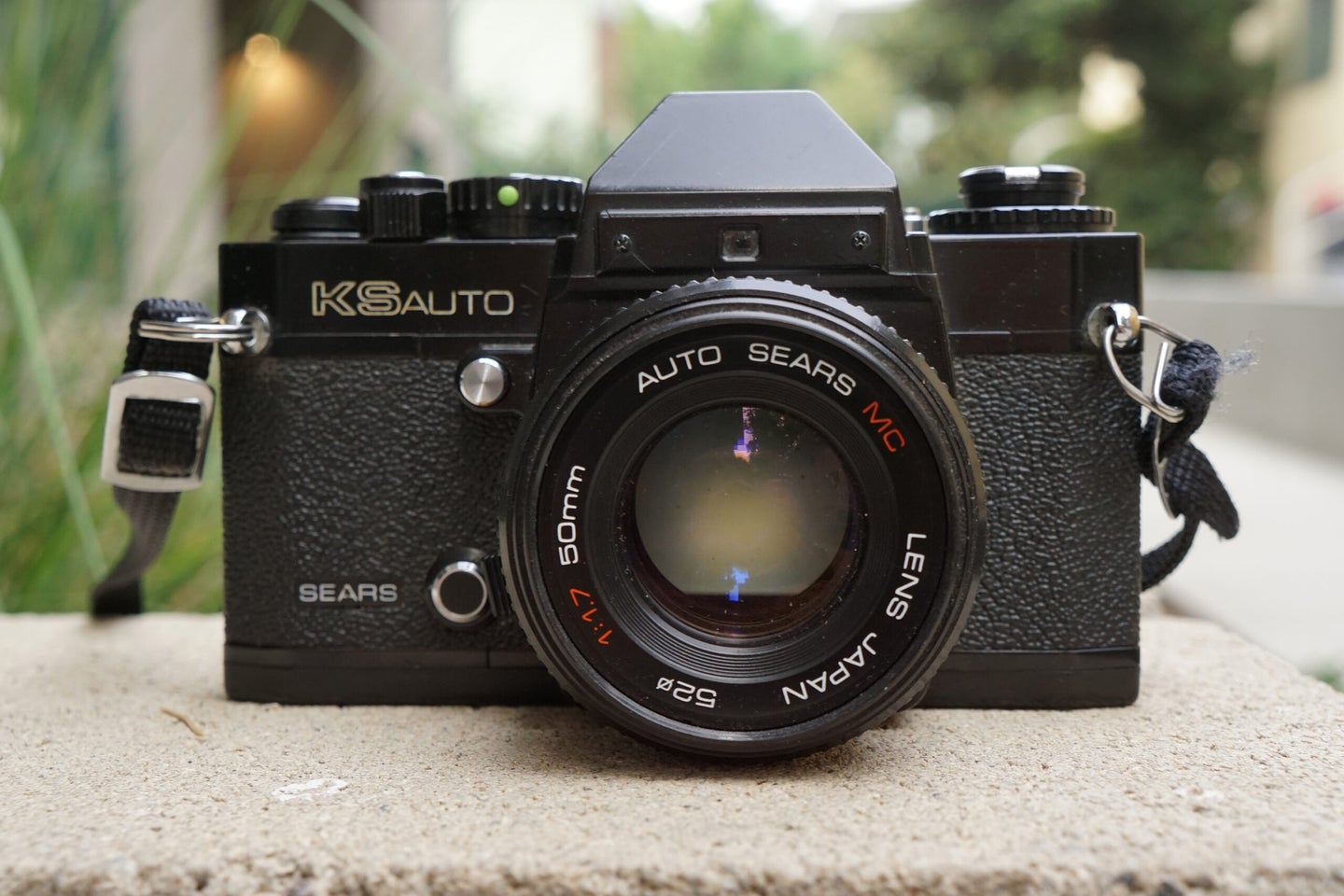 The Sears KS Auto is a great wallet-friendly alternative to the Nikon FE-2. Aaron Gold
SHARE

Film photography is enjoying a resurgence in popularity, but unfortunately, so are used film camera prices. Granted, analog cameras are still bargains compared to new digital cameras, but some of the best-known models are creeping up in value, and as the film photography community discovers more hidden gems, their prices rise as well.

But film camera prices aren’t always based on quality or features; more often than not, it’s the fondly-remembered cameras that demand higher prices. Happily, there are plenty of less-popular cameras—often from the same manufacturer!—that can do the job just as well as their better-known brethren. In this article, we’ll talk about 10 well-known and expensive cameras, explain why they demand the prices that they do, and introduce you to reasonably-priced alternatives that do the job just as well—and some for much less money.

The Nikon F4 and F5 were the go-to professional film cameras from the late 1980s until the mid-2000s. Built like tanks, they were—and still are—tools designed to get the shot under any circumstances. Today, the F4 and F5 are highly regarded and highly priced—we’re talking $200 to $350 for a body in usable condition, and double that for a mint rig that hasn’t led the hard life so typical of these workhorses.

Back in the ‘90s, many F4/F5-toting pros kept a Nikon N8008 in their bag as a backup. Introduced concurrently with the F4, the N8008 was Nikons’ top consumer camera, with sophisticated-for-the-time matrix metering and a fast autofocus system. (It was also an incubator for the F5’s DSLR-like interface.) Like its pro-grade brother, the N8008 almost always gets the shot. The N8008 and N8008s (a later model with a spot-metering mode; they’re called F-801/801s outside North America) lives in the shadow of the more-advanced N90, and as a result, it’s largely underappreciated and underpriced: Bodies sell for a mere $20-$50, a ridiculous bargain for such a sophisticated camera.

Hasselblad is often labeled as the Rolls-Royce of film photography, and the 500-series Medium Format cameras certainly are impressive machines. Not only are they exceptionally well-engineered and well-crafted, but they are also relatively small and light for their film size. But man-oh-man, are they expensive! A complete 500 C/M rig (body, lens, viewfinder and film back) will set you back at least two grand—likely more—and lenses aren’t cheap either.

Bronica cameras were often referred to as “Japanese Hasselblads”. Like the ‘Blad, the Bronica SQ is a square-format leaf-shutter SLR that is compact and light. The optics are excellent, the bodies are reliable, and you should be able to assemble a complete system for less than $1000, and closer to $500 if you are willing to patiently watch the auction sites. If you prefer a rectangular 6×4.5cm negative format, the Bronica ETRS and Mamiya 645-series are bargains as well.

Nikon’s FM2 is among the most prized of 35mm film SLRs, and with good reason: It’s all-mechanical (which means it can operate without batteries), has a fantastic feature set, and uses Nikon’s outstanding lenses. No surprise, then, that it’s one of the more expensive 35mm SLRs on the used market, with working examples easily fetching between $250 and $500.

Instead buy: The Nikon FM

The irony here is that the FM2’s predecessor, the FM, sells in the $100 to $200 range, sometimes even cheaper. The older FM has a slower top shutter speed (1/1000 sec vs 1/4000 sec) and slower flash sync speed (1/125 sec vs 1/200 sec or 1/250 sec for the 2n), and… that’s about it. Under the skin, the FM has similarly robust all-mechanical construction for which the FM2 is prized, and if you can do without the faster shutter speeds, it’s a great bargain. An even cheaper alternative is the Nikkormat FT2, which is bigger and heavier than the FMs but fully compatible with Nikon’s less-expensive pre-AI lenses.

The AE-1 Program was Canon’s first consumer-grade camera to have a program mode, one that could set both aperture and shutter speed. It was a strong seller in its day and remains popular with those transitioning from digital to film, as it combines that old-school SLR feel with the ease of fully automatic exposure control. No surprise, then, that the AE-1 Program commands high prices—$150 to $300 in good working order.

Instead buy: The Nikon FG

Introduced in 1982 as a low-cost AE-1 Program competitor, the FG is one of the most controversial Nikon bodies, derided among Nikon purists for its built-to-a-price-point construction. Though it lacks the heft and feel of other Nikons, read online reviews and you’ll see that most modern-day FG owners (your author included) love them. The FG is small and light and provides aperture-priority, shutter-priority, and full-auto program modes with all Nikon AI-S manual focus lenses. Thanks to its poor reputation, it’s easy to snag an FG for $75 or less.

Mention twin-lens reflex cameras and many film photographers imagine a Rolleiflex. Designed with German precision, Rollei’s Medium Format TLRs are elegant, reliable, and admirably small and light. And in their day they were prized by both casual snapshooters and professional photographers. Their well-earned regard translates to high prices: Depending on the model, Rolleiflex cameras range from $300 to $2,500 or more, and even Rollei’s lower-end Rolleicord cameras go for $200 and up.

Instead buy: A Yashica TLR

The Japanese-made Yashica twin-lens camera was designed as an affordable alternative to the Rolleiflex. But don’t let its budget status fool you, Yashicas are high-quality cameras. For some reason, though, these fine TLRs continue to lurk in Rollei’s shadow. Happily, this is reflected in their prices: Working Yaschicas sell in the $50 to $300 range. You might also consider the Mamiya C220 and C330, rare among TLRs in that they have interchangeable lenses. They’re larger, heavier, and more expensive than the Yaschicas—figure $250 to $500—but they too are excellent cameras.

The K1000 is one of the best-known 35mm SLRs in the film world, largely because Pentax kept it in production for an epic twenty-one years, from 1976 to 1997. Cheaply priced when new and virtually indestructible, the Pentax K1000 became the go-to student camera for generations of photographers and is fondly remembered today. That nostalgia keeps prices up: Despite a massive supply, working K1000s routinely sell between $120 and $150, which is rather steep considering the K1000’s limited feature set.

Instead buy: The Pentax KM

What many photographers don’t realize is that Pentax derived the K1000 from their KM of 1975-77. The KM is actually a more feature-rich camera; its self-timer and depth-of-field preview were eliminated from the K1000 in order to get the price down. There’s one other big difference between the KM and the K1000: How much they cost today. Despite having more features, the lesser-known KM routinely sells for under $100. If the K1000’s slightly-higher price tag isn’t a budget-buster, though, consider your author’s favorite Pentax, the KX, which uses the same mechanism with a mirror lock-up and a better light meter.

Are Leica’s legendary 35mm rangefinder cameras worth their sky-high prices? That debate will likely never be settled, but with the price of entry starting around $1,500 for less-desirable models and rising well above $5,000 for a nice M6—and that’s before lenses!—it’s a question for which few of us will have the opportunity to give an informed answer.

Instead buy: A Voigtländer Bessa R or R-2

Voigtländer is another German brand, except the Bessa R isn’t exactly German—it’s made by Cosina, a Japanese company that has manufactured cameras and lenses for numerous other well-known brands. Hard-core Leica fans might dismiss the Voigtländer as a plastic knock-off, but those who have used both cameras don’t seem to find the Bessa’s performance lacking. The Bessa R uses the 39mm Leica screw mount while the R2 uses the Leica M-mount. And while the Bessas don’t come cheap—figure $500 to $1,500—they are a great value compared to Leica. (Note that the Bessa T and Bessa L are less expensive, but the T has no viewfinder and the L lacks both viewfinder and rangefinder.)

The FE-series was Nikon’s state-of-the-art consumer camera throughout most of the 1980s. A stablemate of the mechanical FM, the FE features an electronic shutter with an aperture-priority automatic exposure mode along with full manual control. Though cheaper than the FM-series cameras, the FEs still command healthy prices in the $100-$300 range.

Back in the 1970s and ‘80s, Ricoh was known for making feature-packed cameras at discount prices. The XR-2 and XR-2s (the latter accepts a power winder) have a similar feature set to the FE, including a match-needle meter display, shutter speed range of 1/1000 sec to 4 sec (the FE goes to 8 sec), and aperture readout in the viewfinder. Ricoh XR cameras are compatible with Pentax K-mount lenses, which are cheaper than Nikkor and of comparable optical quality (though Ricoh’s own Rikenon lenses are fine, too). Their plastic bodies feel a bit cheap, but don’t be fooled—Ricoh was an early adopter of durable polycarbonate, two decades before Canon. You’ll find the XR-2 for $50 or less, and the Sears-branded version, the KS Auto, is even cheaper.

Back in the 1970s and ‘80s, Pentax primarily pursued the consumer market, and the LX is one of their few pro-level film cameras from that era. An impressive camera, it features a weather-sealed body, interchangeable viewfinders, and an unusual hybrid shutter that is mechanically timed at high speeds (1/75 sec to 1/2000 sec) and electronic at slow speeds (4 sec to 1/60 sec). Among die-hard Pentaxians, the LX is considered the brand’s most desirable 35mm body, and prices are high, typically between $200 and $400.

Instead buy: The Pentax K2

A predecessor to the LX, the K2 was actually Pentax’s first (albeit half-hearted) attempt at a “pro” camera, and while it lacks many of the LX’s pro-specific features, it offers similar functionality and uses the same K-series lenses. Its electronically-timed shutter offers speeds of 1/1000 sec down to 8 sec, and it’s the only camera in the K-series to offer an automatic exposure mode. The K2 DMD version was compatible with a motor drive and a data back and tends to sell for a bit more than the regular K2. You’ll find K2s in the $100-to-$150 range, sometimes even cheaper.

The Minolta Maxxum 9 (known as the Dynax 9 in Europe and the α-9 in Japan) was Minolta’s last professional 35mm body. With weatherproof construction, a highly advanced autofocus system, and a 1/12000 sec top shutter speed, the 9 was a formidable competitor for the Nikon F5. The 9 was ignored for many years, but appreciation for this camera is growing rapidly, as are prices—they’re trading in the $250-plus range and prices are on the rise.

Instead buy: The Minolta Maxxum 5

If the Maxxum 9 is a sleeper among pro bodies then its mid-level brother is a sleeper among Minolta SLRs. One of Minolta’s last advanced-amateur film bodies, the 5, encompasses many of the features of the Maxxum 7 (which some argue was a more advanced camera than the 9). It’s not weatherproof and its shutter tops out at a mere 1/4000 sec, but it has sophisticated autofocus and autoexposure systems and a plethora of programmable options. Because they appeared towards the end of the film era, many used examples have seen little use. Best yet, the Maxxum 5 is laughably cheap, with plenty on the auction sites for $30 or less. Your author bought his, in like-new condition and with a lens, for a mere $17.