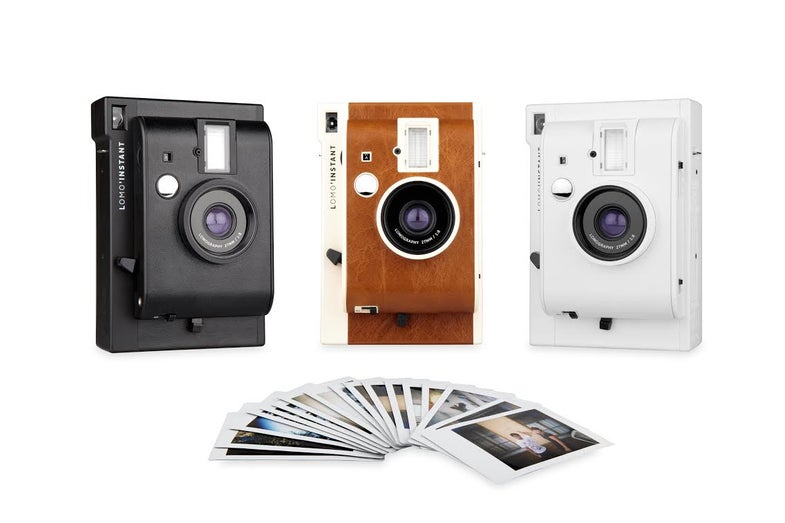 Last Spring Lomography turned to Kickstarter to raise funds for their first-ever dedicated instant camera. That campaign raised over a million dollars by the time it closed in June and shipments to their backers have already started.

Anyone who didn’t jump on the Kickstarter campaign can pre-order the Lomo’Instant with three additional lenses for $149 (or $119 without the lenses). These are expected to ship before Christmas. I spent the last few weeks playing with the White Edition with three lenses.

Any time I pulled my Lomo’Instant out of my bag strangers were fascinated by it. The all-white body and the camera’s design definitely made it a conversation starter.

The camera was easy to work with, you simply load a pack of Fujifilm Instax in the back, fire off the first frame to start your film pack and you are ready to go with 10 shots. Focus adjustments can be made with a large lever on the right hand side of the camera, gels can be slipped into a slot in front of the flash and exposure compensation can be set for +2, +1, A, -1, or -2. It may be a lot of options for someone who is accustom to shooting something like a Polaroid 300, but I enjoyed having so many choices.

Although I spent some time shooting with all of the lenses I found myself favoring the 35mm portrait lens paired with the colored gels.

Shooting with the Lomo’Instant is a lot of fun, but like any instant form of photography the results are unpredictable. The automatic flash setting worked well approximately fifty percent of the time when I shot it in interior spaces. Sometimes my shots were a bit over-exposed, other times they were way too dark. The gels (which I loved experimenting with) also seemed to work out well about fifty percent of time.

I found shots taken with the blue, red and purple gels often turned out to dark, but was incredibly happy with the results of the yellow gel. I would love to experiment with other lighter colored gels.

Because my film pack was limited to 10 shots I found myself carefully shooting each frame. While it was frustrating when things didn’t turn out exactly as I wanted them to, I tried not to dwell and instead of trying failed shots over and over again I’d move onto something new. Part of the joy of instant photography is its unpredictability. Stressing over perfection here would probably make me lose all my hair.

Framing my shots was a little funky depending on what lens I was using. The view through the camera’s viewfinder never perfectly lined up with the result. After my first few shots I learned to embrace this though: if I was shooting a person I’d try to position them close to the center of my frame rather than on the edges.

-Relatively lightweight and fun to shoot with.

-More accessories and options than the Fujifilm or Polaroid Instant cameras.

-Price is on par with the Fujifilm cameras and significantly cheaper than most Polaroids.

-When shots work out as planned, the results are awesome.

What’s Not So Good?

-Unpredictability, but that is analog instant photography for you.

-Instant film still isn’t that cheap, a double pack (20 shots) of Instax film will cost you $15.

Should You Buy It?

If the high price of Instant film doesn’t scare you away and you’re a believer in Lomography’s 10 golden rules, you’ll probably love this little camera. It has a nice design, it is easy to use and there is nothing as great as an instant analog photo that turns out close to what you were aiming for.