We spend some quality time with Canon's new APS-C camera 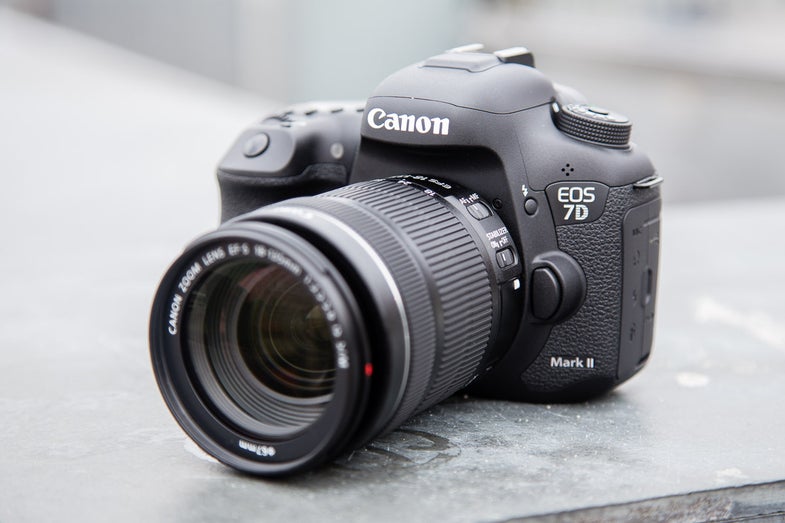 One of the biggest news stories so far at Photokina 2014 is the release of the much-anticipated Canon 7D Mark II. I’ve been using the original 7D as part of my own personal kit since 2009, so I was very interested in trying the follow-up. The model I used was not final, so I can’t make any decisions about image quality just yet, but I was pretty impressed with the shooting experience so far.

Feel
Picking up the camera, it feels a lot like the original 7D. The magnesium alloy body makes it feel a bit heavier than the 6D I brought with me, but it also feels really sturdy. According to a Canon rep, however, that magnesium alloy body is also one of the reasons there’s no WiFi in the camera. The signal has a hard time getting through the metal shell. There is a plastic cap in the top, but that spot is occupied by the GPS, which they say people prefer. Personally, I think I’d rather have the WiFi, but GPS does make sense in an “adventure” oriented camera like this.

The layout hasn’t changed all that much from the original. It has been updated to feel more like the current line of Canon DSLRs. There’s still no touch screen, which seems like it was likely done in the interest of durability.

Autofocus
This is where things get pretty interesting. The original 7D had one of the faster AF systems when it was released and the 7D Mark II’s system seems to blow it out of the water. They have included a lot of the features also found in higher-end cameras like the 5D Mark III and the monstrous 1D X.

In the menu system, you can select different use cases for the AF system that perform differently under fast-moving situations. If you want to set it so it won’t get distracted by objects flying into the scene, you can do that. If you want to pan more effectively without the AF buzzing around, you can do that, too. It takes a bit of getting used to, but once you know what the modes do, they can be extremely handy.

The AF point coverage on the sensor gets much closer to the edge than it does on the 5D Mark III due to the crop sensor. The AF points cover the vast majority of a scene, which gives you a ton of great composition options. It’s not quite as insane as something like the new Samsung NX1, which has more than 200 phase-detection AF points that basically extend to the edge of the screen, but it’s still very good.

They have added a new switch to the back of the camera that lets you quickly switch between each of the focus modes. You can use single-point, or select the whole area and let the camera do all the focusing work for you. You can choose small groups as well as large groups of pixels. Honestly, I wasn’t that excited about this feature when I heard about it–after all, it’s just a switch—but it immediately became one of my favorite features about the camera. It can be overwhelming to have all these focus options on a camera, but having them available at the flick of a switch made them far more accessible.

The AF tracking (even though these were beta units) seemed excellent. We were shooting people jumping on a very fancy trampoline and the focus was grabbing onto them and not letting go. The camera can churn out bursts at up to 10 fps and, even though the gymnasts weren’t even close to standing still, they still stayed extremely sharp, even when I just put the camera in auto AF area and let it decide for me.

I was using the Canon 18-135mm STM kit lens, which is designed to work very well with the dual-pixel AF in the camera, so I switched over to live view a bit as well, which is something I’d never typically do in this situation.

I liked using the hybrid AF with the 70D, but I was primarily using the touchscreen to show it where to go. Without the touchscreen, it’s an entirely different experience. It still locks focus surprisingly well, but I’m a bit spoiled being able to just poke where I want to focus.

Overall, the camera actually does feel a lot like using a mini version of the 1D X. It’s a thing I kept hearing in the press room and, for the most part, it seems true. The 10 fps burst rate and the zippy AF would make me feel very confident in a sports shooting situation.

Now, the question is how it performs on the imaging front. The original 7D, in my opinion, was never the best when it came to noise. It wasn’t a problem, really, but there were other APS-C DSLRs out there that produced less noisy images. Now, they have added a few megapixels to the equation, but they have also coupled that with a pair of their most powerful image processors, so I’m very curious to see what the final photos look like.

I also got a chance to check out the new Canon 400mm F/4 DO IS USM lens, but I didn’t actually get to shoot with it. For those who are unfamiliar, the DO stands for diffractive optics, which is a different way to layout the glass inside the lens. By splitting the light apart into its colored elements and then converging them again before hitting the sensor, it’s supposed to eliminate chromatic aberration, which happens as a result of different wavelengths of light bending a slightly different angles.

While I can say literally nothing about its performance, I can say it’s really something to pick up a lens that long and that massive and only have it weigh roughly 4.5-pounds. Having used the F/2.8 version for a while, I got used to the massive weight of it. This felt like a vacation in comparison. We hope to give it a full test down the road.

We’ll be on the show floor throughout the week checking out all the new and awesome stuff Photokina 2014 has to offer, so be sure to stay tuned.