This 18MP entry into the DSLR war competes impressively with Nikon's D300s. 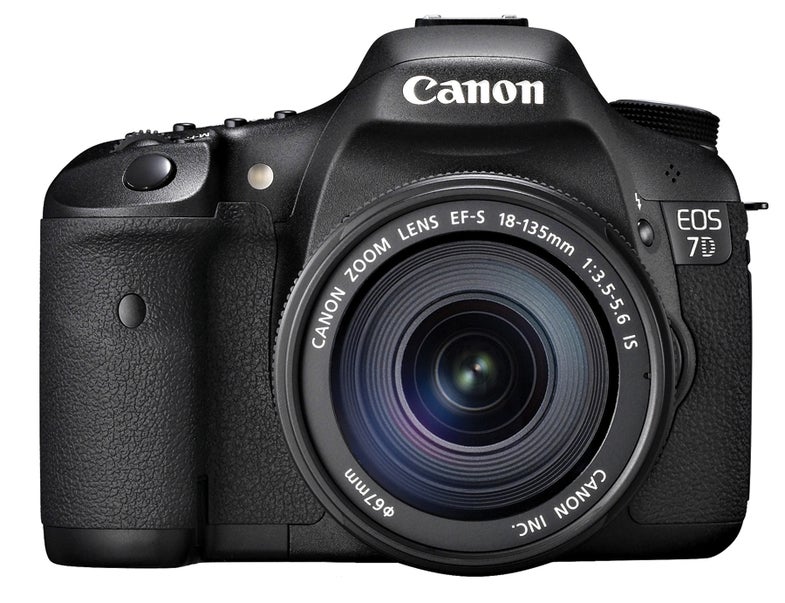 News that Canon would be making a direct competitor to Nikon’s APS-C workhorse, the D300s ($1,600, street, body only) made many Canonites optimistic. Optimism became excitement with the unveiling of the EOS 7D ($1,700 street, body only; $1,900 with 28-135mm f/3.5-5.6 IS USM lens). Its impressive specs include 18MP resolution, a 100-percent accurate viewfinder, sensitivity up to ISO 12,800, blazing burst rate, and-a first for Canon-built-in wireless flash control. Its performance in our lab and field tests proved as impressive as its specs, besting its Nikon rival on several indicators-but trailing on a few others.

In The Pop Photo Lab

As expected, thanks to its 18MP CMOS sensor, the EOS 7D scored an Excellent rating in resolution, easily outgunning the Nikon’s 12.3 MP CMOS sensor. Even at ISO 12,800-a stop more than the Nikon’s highest sensitivity-the Canon outresolved the Nikon at ISO 100, though we deem the noise Unacceptable at that high sensitivity.

The noise performance was of particular interest. With nearly 6 million more pixels than the Nikon, the 7D’s pixels are smaller than those of the D300s-which means, nearly always, more noise at higher ISOs. The surprise: The 7D produced less noise than the D300s at its highest ISOs, 3200 and 6400, although the Nikon produced comparable or less noise from ISO 100 through ISO 1600. If you’re not a low-light shooter, the Canon’s higher sensitivity might not make a huge difference. But the ISO cushion comes in handy when you’re shooting handheld with a long, nonstabilized lens on overcast day.

Both cameras earned Excellent ratings in color accuracy and capture admirable detail in highlights and shadows, thanks to 14-bit RAW image capture.

Performance In The Field

The 7D’s extra resolution lets you make prints larger than 13×19 inches. We made pleasing 17×22- inch prints of images from the EOS 7D with the Epson Stylus Pro 3880 (reviewed on page 73) after cropping the originals down from their native 17×25.5-inch size. And with the help of a program such as OnOne’s Genuine Fractals or Alien Skin’s Blow Up, you could make even larger prints.

The 7D’s autofocus was fast and precise in our tests, but couldn’t beat the Nikon, especially in extremely low light. The gap between the two is very slight, though, until you sink down to moonlight-level dimness.

AF tracking is where the real difference shows up. The 7D is the first Canon camera to use the metering and AF systems together to track subjects by shape and color. Called Intelligent Focus Color Luminosity , it gave us good results, but wasn’t as consistent as Nikon’s 3D Focus Tracking, which uses a similar approach.

We were still able to track a subject moving toward or away from the 7D and even recompose while panning with a moving subject. Yet we ended up with a higher percentage of usable photos when using AF tracking with the D300s. For professional sports shooters this may be critical, but they’ll probably be using higherend models. Amateur action enthusiasts should be pleased.

They’ll also like its burst rate. The first EOS outside Canon’s 1D and 1Ds lines to use dual Digic processors, the 7D delivers on its promise of 8 frames per second, up to 126 Large Fine JPEGs, 15 RAW, or 6 RAW + JPEG when using a UDMA card. With one of SanDisk’s new Extreme Pro or Lexar’s new 600X Professional CF cards, you may be able to eke out a few more shots in a burst, since the camera’s buffer will clear faster.

However, as Lexar photographer Jeff Cable demonstrated at a recent event-and we duplicated in our field testing-a better strategy might be to shoot shorter bursts. For example, if you keep a single burst to about 40 shots with one of these new cards, and pause about a second between each burst, you’ll maintain that 8-fps speed much longer and capture more of the decisive moments you ultimately want.

Video builds on what Canon put into the EOS 5D Mark II, with a wider choice of frame rates for the various pixel resolutions (see the Specifications sidebar for a full list). Nikon still hasn’t included full 1920×1080-pixel capture in any of its DSLRs, so Canon wins here-and this resolution at a frame rate of 30 fps matches the rate of most HDTVs.

The camera has the most solid APS-C body Canon has made yet, with magnesium-alloy body panels and more weathersealing than the EOS 50D, though not quite the same level as the 5D Mark II.

The control layout is similar to the 50D’s, though most buttons are to the left of the 3-inch 920,000-dot LCD. The on/off switch also moved up to behind the mode dial, and a useful new switch moves between still and video capture. The new RAW + JPEG button lets you grab a RAW shot even in JPEG-only mode.

Custom functions let you change the role of some buttons, and a new interface makes it easier to do so, showing where on the body you’ll find the buttons being assigned. The new Q (Quick Control) button brings up a screen that shows you the most essential settings and lets you navigate through them with the small joystick on the camera back.

Race All of these new features and design approaches are great, but it feels as though Canon is playing catch-up. Nikon was first to couple its AF and metering systems for tracking purposes, and Olympus and Sony offered navigable quick menus many models ago. Likewise, Nikon was the first to offer a rock-solid APS-C format camera.

That said, Canon has indeed caught up, if not with a definitive lead over Nikon in this category. The 7D wins on resolution, but loses on low-light AF speed. It wins on low noise at high ISOs, but can’t match the 3D AF tracking on the D300s.

The DSLRs wars continue, but Canon has served this category of camera well.