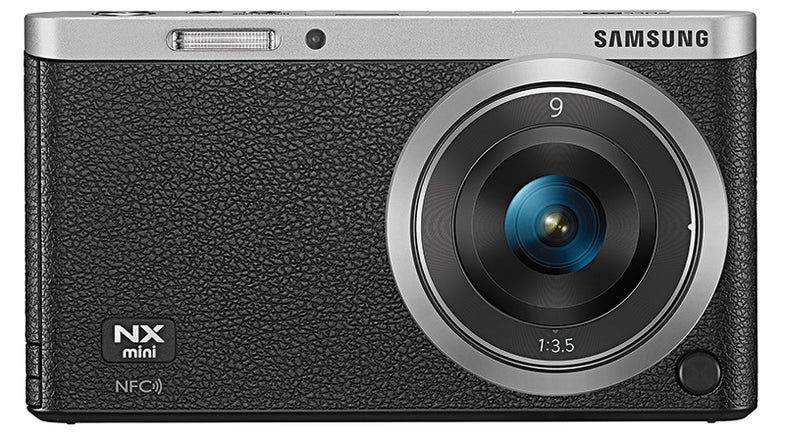 The NX Mini is so small that Samsung opted to use a MicroSD card slot instead of a regular SD card slot.
SHARE

The quest for the ever-smaller camera never seems to end. For its part, Samsung recently unleashed the NX Mini ($400, street, with 9mm f/3.5 lens), which is one of the smallest interchangeable-lens compact (ILC) cameras you can buy. With its tiny size comes a small 1-inch sensor, a new lensmount, and a memory card slot that accepts MicroSD cards. But you can also fit the camera in the pocket of your hoodie and push images to your smartphone for easy and quick sharing. Given the smallish sensor size, and the potential for problematic control systems when designing such a small camera, we wasted no time running the Samsung NX Mini through our lab and field tests.

As we’ve seen in the past with cameras in Nikon’s System 1 and other cameras with 1-inch sensors, reducing the sensor size can limit image quality. Here we saw the 20.5MP Samsung NX Mini do relatively well, while (unsurprisingly) falling short of what a camera with an APS-C or full-frame 35mm sensor could deliver. In our tests, the Samsung NX Mini ended up with an overall image quality rating of Extremely High from ISO 100 through ISO 800. Beyond this sensitivity range, resolution fell below the level necessary to achieve that rating, which also takes into account noise control and color accuracy.

Like its larger NX siblings, this Samsung comes with a full version of Adobe Photoshop Lightroom 5 for RAW processing. While the NX Mini probably won’t be the RAW shooter’s camera of choice, for testing purposes we treated it as we would any other model and based our assessment on RAW images converted to TIFFs with the software that comes with the camera.

As we do with any camera that comes with Lightroom, we applied varying levels of noise reduction (0, 25, 50, and 75 percent) and saw where the best balance of low noise and high resolution resulted. For the Samsung NX Mini this meant applying 25 percent luminance noise reduction from ISO 100 through ISO 3200, then 50 percent to ISO 6400 through ISO 25,600.

By experimenting this way, we also noticed that the RAW files from the NX Mini showed particularly low noise even before Lightroom worked its magic. We ended up applying 25 percent reduction as a minimum for our official test results, since it gave the camera an Extremely Low rating from ISO 100 through ISO 1600 with little appreciable loss in resolving power. However, without any reduction applied in Lightroom, the NX Mini still maintained a Low or better noise rating up to ISO 3200. Under our test conditions, the NX Mini held a Low or better rating up to ISO 6400. At the NX Mini’s top ISO it shows less noise than at ISO 12,800, which might seem strange. But, once you note the steep drop-off in resolution that we mentioned earlier, it seems that Samsung might have just been a tad heavy-handed in trying to keep the noise down.

If this were a camera meant for fine-art photography, in which big prints are de rigueur, we’d be more concerned about the amount of noise reduction baked into the RAW files. Given that this camera lends itself to much more casual use, the resolution-robbing NR is not that much of a concern. Color Accuracy, as we see in so many cameras these days, earned an Excellent rating with an average Delta E of 7.0 putting it under our cutoff of 8.0 for top honors.

Some camera manufacturers’ attempts at making a truly tiny ILC have resulted in awkward control systems. It’s no secret that we’re not big fans of the Nikon System 1 controls, and in our June 2014 test of the Panasonic Lumix GM1 ($698, street, with 12–32mm f/3.5–5.6 lens) we noted that you must embrace touchscreen controls if you really want to enjoy that camera. The same is essentially true of the NX Mini.

This Samsung does not lack dedicated control buttons, however. The menu navigation buttons on the back allow direct access to display, autofocus, drive mode, and shutter speed/aperture/exposure compensation. In the case of the latter trio, the bottom button toggles through those controls as you keep pressing it, which became a surprisingly convenient way to change those settings. For ISO you have to use the touchscreen or resort to the menu, where it is somewhat conveniently found four items from the top.

If the NX Mini’s little sliver of a built-in flash, with its guide number of 13.3 feet, isn’t powerful enough for you, your only other option right now is the SEF-7A accessory flash that comes in a kit with the camera body and 9–27mm lens, or with a dual-lens kit. We haven’t yet seen the flash available separately anywhere. Furthermore, the camera’s small size prevented the inclusion of a standard hot shoe. A tiny proprietary accessory terminal, reminiscent of the ones Sony used on its first NEX cameras, sits atop the camera instead.

Another size-related omission is a mechanical shutter. Rather than having the snap of mechanical curtains govern your exposure time, the NX Mini just samples the sensor. While this can lead to some level of distortion when capturing particularly fast-moving objects (see Tech Talk, June 2014, for an explanation of this phenomenon), we didn’t experience any deleterious results during our field testing.

The lack of a mechanical shutter may actually have helped Samsung achieve the NX Mini’s fast burst speed of 6 frames per second. The buffer will only allow up to four RAW captures per burst, and the exposure is locked after the first image; another example of how the NX Mini, like most tiny ILCs, has certain unpleasant similarities to compact cameras.

Video tops out at 1920x1080p30 in H.264 MP4 files. Footage can’t live up to what you’d get from Panasonic’s Lumix GH4, certainly, but it will look nicer than what you’d get from your cell phone. In the end, that’s really the main point of the NX Mini. It allows for a seamless connection to your smartphone so you can easily share images while giving you better image quality and a better control system.

If you’re looking for an extremely portable camera with interchangeable lenses and excellent smartphone integration, the NX Mini should be on your list. It remains smaller than Panasonic’s GM1, if only by a little bit. It’s so small that we protected it with an old Mountainsmith Cyber II S camera case that was originally designed to hold compact cameras.

In the Panasonic’s favor, though, is the Micro Four Thirds lens selection. True, some of those lenses will look ridiculous and feel awkward when mounted on the GM1, but should you want to, you can at least mount them. The manufacturer plans on releasing an adapter so that you can use its regular NX lenses on the Samsung NX Mini, but for now the list of native lenses is limited to two. With the 2.7X lens factor figured in, the 9mm f/3.5 prime we used for our testing becomes an equivalent of a 24.3mm. The 9–27mm becomes similar to a 24.3–72.9mm zoom. These two cover a nice focal range for casual shooting and offer more convenience than a smartphone’s wide fixed lens would, but faster glass would help this system shine.

As it stands, the Samsung NX Mini provides a much better alternative to any smartphone camera.