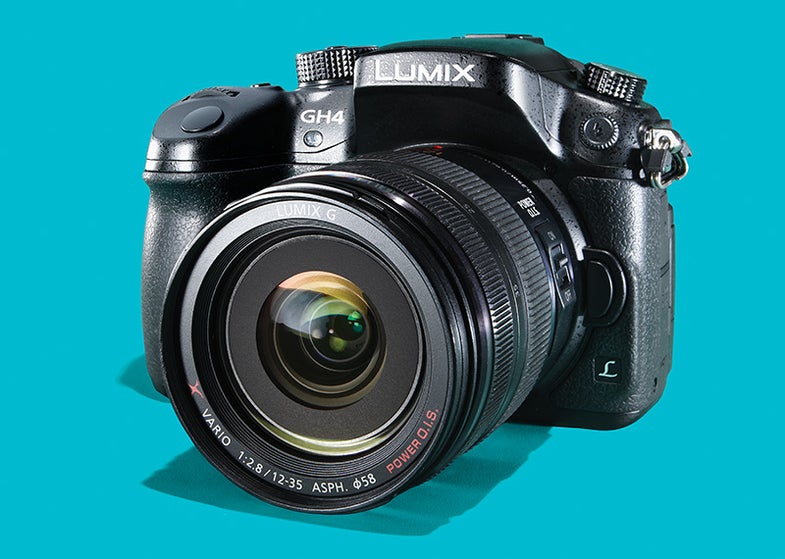 The “convergence” that’s been bandied about in tech circles for years now is finally becoming a reality for capture of still images and video. A striking case in point: Panasonic’s Lumix GH4 ($1,698 street, body only), which delivers a very high level of still imaging power with its 16.05MP Micro Four Thirds sensor, as well as state-of-the-art video capture at up to 4K resolution.

This new flagship also includes an updated AF system, 2.36-million-dot OLED electronic viewfinder, and rugged, weather sealed magnesium-alloy construction. So let’s take this imaging powerhouse into the Popular Photography Test Lab and out into the field to see how it stacks up.

When it comes to overall image quality, the GH4 earned an Excellent rating from its lowest sensitivity of ISO 100 through ISO 400—basically the same level achieved by the GH3 (whose sensitivity bottomed out at ISO 125). But the GH4 showed significantly better noise results than did its predecessor, due to the new noise-reduction defaults in the latest version of the Silkypix SE RAW converter that ships with the camera.

At the same time, resolution decreases more at higher ISOs when those default settings are applied. From ISO 100 through 400, the GH4 got Extremely Low ratings in noise—top honors in this test, signifying super-clean images. Further, the GH4 was able to keep noise to a Low or better rating up through ISO 6400, which is quite impressive for a sub-$2,000 camera. Above ISO 6400, noise takes a steep jump to an Unacceptable rating.

In our color accuracy test, the GH4 just barely earned an Excellent rating with an average Delta E of 7.8.

To compare, the GH4’s main Micro Four Thirds competitor in still photography (it doesn’t record 4K video), the less-expensive Olympus OM-D E-M1 ($1,299 street, body only), also just got by the cutoff for an Excellent score in color accuracy. It matched the GH4’s overall image quality rating, though its images were not as squeaky clean at lower sensitivity settings. Furthermore, the E-M1 kept noise to a Low or better rating only up to ISO 800 and stepped into Unacceptable territory at ISO 6400. One thing in Olympus’s favor: Its sensor-shift image stabilization lets you save money on lenses and reduce camera shake even when using legacy and adapted glass.

For the same price as the GH4, Sony’s a7 ($1,698 street, body only) employs a full-frame 24.3MP sensor for higher resolution, at the expense of extra noise at higher ISOs. But its burst shooting is a not-so-impressive 2.5 frames per second, compared with the GH4’s 7.5, and video recording tops out at 1920x1080p60—if that matters to you.

The GH4 feels extremely comfortable in the hand. The grip is well-shaped and all essential controls are easily within reach of your fingers. There are five customizable hard buttons, with more than 50 functions you can assign to any of them. If that’s not enough, you can also assign up to five soft buttons that pop out on the touchscreen when you need them.

The body feels solid, and its weathersealing means you can take it out in the rain and not worry (provided you have a similarly weathersealed lens attached). The EVF has enough resolution to keep most people from worrying that it’s not an optical finder, and its refresh rate is fast enough so that it remains relatively smooth when you pan across a scene. There are still plenty of photographers who will use only optical finders, but if you don’t mind an EVF, you’ll likely be happy with the one in the GH4.

Given all the attention this Panasonic is getting for its ability to record 4K video, we expected that its footage would look good—and it certainly did. There are so many combinations of file formats, codecs, frame rates, and compression types and levels that we have to admit that we didn’t try them all. We paid closest attention to the 1080p60 mode at 200 Mbps with ALL-I compression, since this will show to its best advantage on most people’s HDTV screens. That footage was among the best HD video we’ve seen in a camera in this price range—the realism and detail that comes along with this amount of data capture is extremely pleasing.

When it comes to shooting 4K, there are a few things you should know. The GH4 can record at both Cinema 4K (4096×2160) and 4K (3840×2160). Second, you can select the camera’s system frequency to match the frame rate at which you plan to record: Cinema 4K can be recorded to a memory card only when the system is set to 24 Hz; the other options are 50 Hz, to match the European TV standard, or 59.94 Hz, which is what cameras actually use when you select 60p recording. Finally, you’ll need a UHS-I Speed Class U3 memory card in order to record 4K with this camera, and these are currently available only from Panasonic and Kingston.

If you don’t want to record to a memory card, you can send footage out from the Micro HDMI port to an external recorder or buy Panasonic’s DMW-YAGH interface unit, which has professional-grade stereo XLR audio inputs and 3G-SDI pro video outputs with time code. The interface unit also enables recording in a 10-bit color space that allows for better color adjustments  in postproduction.

We didn’t have an interface unit on hand for our test, as it seems like overkill for most of our readers. But having recorded both Cinema 4K and 4K, we can safely say that we haven’t seen video this good from any camera we’ve tested to date. While we don’t expect many non-pros to delve into 4K right now, the future looks wonderfully detailed once 4K becomes more widespread.

Burst shooters will probably appreciate the 7.5 fps capture with continuous metering and AF. Even better, the buffer doesn’t fill up until you’ve captured 40 RAW frames or up to 100 JPEGs. And the tracking autofocus did a great job of keeping up with moving subjects.

Panasonic’s GH4 is one of the best ILCs you can get these days. Even if you don’t expect to shoot 4K, its 1080p video is stunning. But for GH3 owners who don’t need 4K video capture, the GH4 might not make sense as an upgrade—especially true if you’re primarily a still shooter. Some videographers might not be able to resist the appeal of 200Mbps recording, compared with the GH3’s limit of 72Mbps, but we suspect they’ll be few.

Micro Four Thirds fans can save a few hundred dollars by opting for the Olympus’s OM-D E-M1, though their savings come with the promise of noisier images. At lower ISOs, however, this may not be a huge issue for some photographers.

The GH4 finds itself in a strange spot. The extra cost of enabling 4K recording puts it at a disadvantage compared to some other models. At the same time, it’s an amazing camera that comes as close to the ideal of a do-it-all still/video capture device as we’ve seen yet. Sony’s soon-to-arrive a7S promises to deliver a similar level of convergence, but with its 12.2MP sensor, we do not expect it to serve up as much resolving power as the GH4, even if it delivers better low-light performance. For now the GH4 just may be the most versatile ILC you can buy.