This full-frame ILC is an odds-on winner 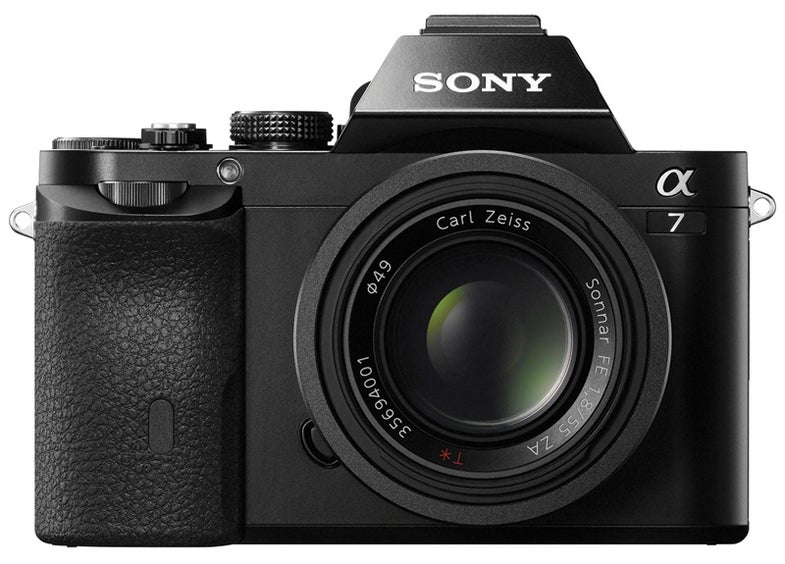 When Sony introduced the Alpha 7 and 7R full-frame interchangeable-lens compacts last year, we tested the A7R first, given that its breathtaking 36.4MP sensor made it the hotter news by far. The A7’s 24.3MP sensor makes it a different beast than the A7R, and one with a significantly lighter street price ($1,698, body only; $1,998 with 24–70mm f/3.5–5.6 FE OSS lens)—which alone might make the A7 a bigger seller. But how did it perform in our actual testing?

In the Test Lab
With fewer pixels in the same amount of sensor space, the A7 unsurprisingly produces less image noise at equivalent ISOs than the A7R. Sure, it delivers less resolution than its pricier sibling, but it still serves up enough for an Excellent rating. If you don’t crop heavily or print huge, the A7 might make more sense for you.

The camera earned an overall image quality rating of Excellent from ISO 50 through 800. At its lowest available sensitivity, ISO 50, the A7 turned in 2650 lines per picture height, well above our cutoff of 2500 lines for top honors in this test. At ISO 800, resolving power held strong with 2575 lines. By ISO 3200, it dipped to 2450 lines—still rated Extremely High. By ISO 6400, it resolved 2380 lines, with noise reaching more serious levels. At the A7’s highest sensitivity of ISO 25,600, resolution fell to 2200 lines, a Very High rating on our scale.

In our noise test, the A7 showed impressive results. Images at ISO 50 are clean enough for our best rating of Extremely Low, and the A7 maintained this up to ISO 200. At ISO 400 noise rose only enough to bring it to Very Low. From there noise sank one rating with each whole step up its sensitivity range: ISO 800 brought a Low rating; ISO 1600, Moderately Low; and ISO 3200, Moderate. At ISO 6400, test images became noisy enough for an Unacceptable score.

Applying just a bit more noise reduction in processing RAW files would definitely bring that into Acceptable territory. Sony doesn’t make this very easy, though. We used the default automatic noise reduction in Sony’s Image Data Converter software that ships with the camera; unlike Canon’s Digital Photo Professional (in the box), Nikon’s Capture NX (separate purchase), and other manufacturers’ RAW converters, this doesn’t show a numerical value for the amount of NR applied. Having this information makes it easier for you to fine-tune your own images.

In the Field
Since the A7 shares much of its body and control design with the A7R, we’ll reiterate some of the things we said in that test (January 2014, available on PopPhoto.com).

The weathersealed metal body feels sturdy, and the nicely sculpted grip is one of the best we’ve experienced on an ILC. As with the A7R, we wished the dedicated exposure compensation dial were just be another assignable command wheel. Not to denigrate it—the current design lets you use the two assignable command wheels atop the camera, plus the four-way controller on the camera back—but the dedicated EC dial lets you apply only +/– 3 EV in 1/3-EV steps. Want ½-EV steps, or a range to +/– 5 EV? You’ll have to plunge into the menus.

Burst shooters will find the A7 slightly faster than the A7R, but still slow by today’s standards—only 2.5 frames per second. The buffer runs deep, though, allowing about 32 RAW (14-bit) shots before filling. We suppose building a full-frame shutter mechanism to operate at 5 fps or faster in a camera this small is a tall order. So if this is one of the A7’s bigger shortcomings, take it as a compliment.

The A7’s shutter has taken flak on the internet from shooters who complain that it causes too much noise and vibration. While some cameras are certainly quieter, we found the shutter noise softer and less jarring than on most DSLRs.

Videographers will like the A7’s 1920x1080p60 AVCHD movies. Colors are particularly well–saturated, even at higher ISOs in dim lighting. You can send uncompressed video to an external recorder though the micro-HDMI jack, plus there’s a headphone jack to monitor audio and an input for an external mic.

The camera’s built-in Wi-Fi and NFC make sending images to your smartphone fairly painless. You can also trip the shutter and adjust exposure compensation through the SmartRemote app—another area where Sony could add more functionality. Some apps, notably Olympus’, give you far more control over the camera.

The Bottom Line
Comparisons are tricky for the A7, since there are no other 24MP ILCs, other than Sony’s discontinued NEX-7 and newly announced Alpha 6000, which we haven’t tested; the only other full-frame ILC is the A7R. Samsung’s NX300, with a 20.3MP sensor, produced Excellent tested resolution at ISO 100—but the A7 offers higher resolution and lower noise through ISO 800. Both cameras earned Excellent ratings in color accuracy, though the Samsung scored a bit higher. And while the NX300 costs much less than the A7, it lacks an electronic viewfinder (and can’t accept an add-on), doesn’t have as nice a grip, and its control system falls short of the A7’s.

While few FE (full-frame) lenses are available yet, Sony has more in the works. We used the 24–70mm f/4 , 35mm f/2.8, and 55mm f/1.8 FE lenses, and all worked well. We also used a classic 35mm f/2.5 Nikon rangefinder lens through a Voigtländer adapter. You can adapt nearly any DSLR lens, including Sony’s highly regarded glass. For full-frame shooters who want a small body to supplement an existing Sony DSLR, the A7 offers a consistent experience by providing the same field of view, regardless of whether you shoot from behind a flipping mirror or not.

So should you consider an A7? Unless you need to capture bursts of fast-paced action, absolutely. The only like camera that beats it in pure image quality is Sony’s own A7R—which costs $600 more and has a one-stop disadvantage in noise suppression. The A7 makes more sense for a typical photographer looking for a luxurious shooting experience along with top-notch imaging.