It's no limited-edition Leica, but it sure is shiny 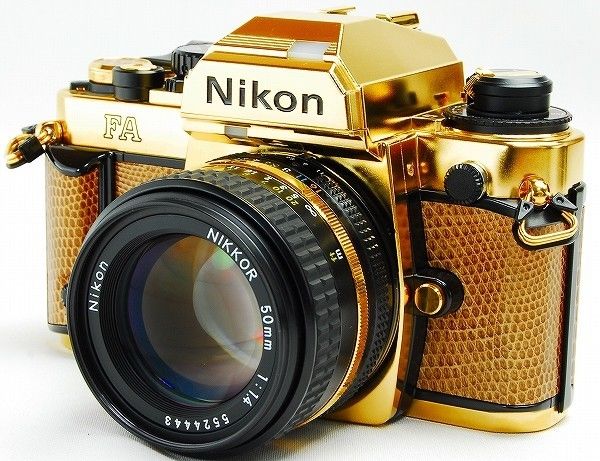 When you think of extravagant, limited-edition film cameras, your brain probably goes right to Leica. But, this gold-plated Nikon FA SLR camera is no slouch when it comes to fanciness.

The camera itself was produced to commemorate the FA winning an award from a Japanese magazine. It’s functionally identical to a traditional FA SLR, but it has 24-karat gold plating on the metal bits and the body is wrapped in fine lizard skin. The 50mm F/1.4 Nikkor lens even has a gold ring to tie it into the body.

There were reportedly about 2,000 of them produced back in 1984, so they aren’t as rare as some other ultra-collectible cameras. Prices on eBay currently run from $2,000, all the way up to a $12,000 copy that claims to be in dead mint condition. It comes in a swanky wooden box and what looks to be a red velvet bag as well.

If you want a black or black-and-chrome one just to go shooting with, you can pay anywhere between $100 and $500 and use the rest of that money for film.