The 30 Most Important Digital Cameras of All Time

From the first prototype of 1975 to Sony's Cyber-shot RX1 of 2012, here's a chronicle of photography's inevitable march to digital 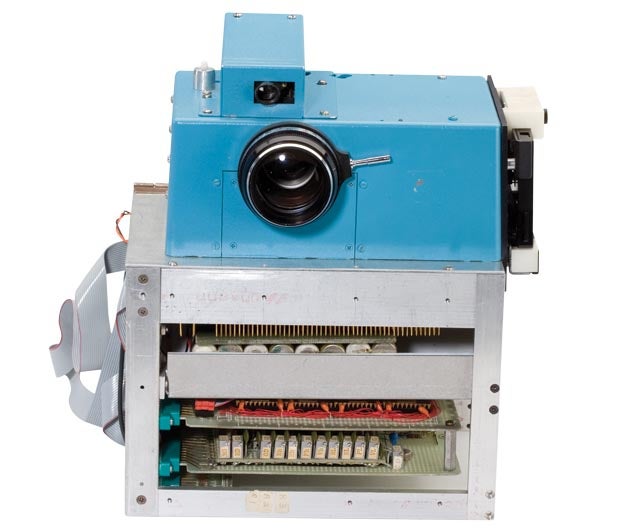 Digital photography has proven to be one of the most world-changing technological breakthroughs of the late 20th century. But the quest to capture and transmit images via electrons began nearly two centuries ago. Just a few years after Frenchman Nicéphore Niépce produced the first fixed photographic image in 1826 or 1827, another invention—long-distance digital telecommunication—arrived. And not long after Samuel F.B. Morse and Alfred Vail developed a viable electric telegraph and a binary code for conveying messages, inventors began to explore sending and recording images via dots and dashes.

Piece by piece, the technologies that would make digital imaging possible fell into place. By 1860, you could send a kind of fax; in the early the 20th century, news organizations could transmit pictures as dot arrays. By mid-20th-century, videotape recording and the digital computer added other critical pieces; solid-state electronics and the microchip would shrink them to manageable size. By the 80s, “still video” cameras captured analog images via a semiconductor array invented at Bell Labs in 1969: the charge-coupled device, or CCD. Which brings us to the first of these, the most important digital cameras of all time—up until now, of course.

Kodak engineer Steven Sasson started with “a white piece of paper” when, at age 25, he got the assignment to come up with an application for CCDs. He decided on a camera with no moving parts, recording in a digital format. Sasson and his team spent a year cobbling together this 8-pound device, built around a new Fairchild Semiconductor 100×100-pixel sensor. It took the first digital image, in black and white, in December 1975.

(The George Eastman House Museum of Photography and Film in Rochester, NY, provided this photo and other photos of cameras in its collection.)

Dubbed “the Brownie of the personal computing set” by the New York Times, the first digital camera to reach the U.S. consumer market proved too expensive ($600) and too rudimentary (376×240 pixels, B&W) to really sell well, but it found some buyers among real-estate agents and insurance adjusters.

Using a 1.3-megapixel Kodak CCD with a color-filter array invented by Bryce Bayer, the first commercial digital SLR was a Nikon F3 body whose film chamber and winder were gutted to make room for the sensor and electronics. The photographer needed to schlep a separate storage unit, worn on a shoulder strap and connected via cable.

Nicknamed “The Brick,” this 2-pound device was the first digital back for medium- and large-format cameras. Its 4x4cm, 4-MP CCD, shown on a Hasselblad 500EL, captured B&W images or worked with a motorized filter wheel mounted in front of the lens to take separate exposures through red, green, and blue filters to be assembled into a single full-color photo.

Unlike many other digital cameras that stored photos in “volatile” memory that required battery power to prevent file loss, this VGA resolution (640×480-pixel) camera was the first to save image files in the kind of solid-state flash memory that is now the near-universal storage medium in digital cameras.

Generally believed to be the first consumer (that is, under $1,000) camera to take color images on a single sensor, the QuickTake, designed by Kodak and manufactured by Chinon in Japan, captured at VGA resolution. It represented the first foray by Apple into photography, and you know where that went.

Kodak collaborated with the Associated Press to create a digital SLR that met the needs of photojournalists. Based on a Nikon N90 body, the 1.3-megapixel camera had removable memory cards and enough sensitivity (ISO 1600!) to shoot in available light. The Vancouver Sun became the world’s first newspaper to convert to all-digital photography with theses cameras. Price: $17,950, but discounted to $16,950 for AP members.

Foreshadowing the camera phone and Wi-Fi-equipped cameras that wouldn’t appear until many years later, this 442,368-pixel model was the first digital camera with the ability to transmit images over a phone line, without the intermediary of a computer or other device.

Cue the chimp. The Casio QV-10 ushered in the present era of instant photo gratification with a 1.8-inch color LCD that could play back images and function as a viewfinder. Before it, optical viewfinders were the only way to compose pictures; LCDs were text-only control panels.

This model got the photo/video convergence rolling by being the first digital still camera to record video. It shot 5-second 768×480-pixel clips with sound at a smooth 30 frames per second, and saved them in the then-new MPEG format. And it could play them back on its color 2.5-inch LCD or a connected TV.

The MAgnetic VIdeo CAmera line debuted as analog still video in 1981, and went truly digital with the FD5 and its 10x-zoom-equipped twin, the FD7. These got millions of consumers into the habit of popping their digital memory out of their camera and into a computer drive—a floppy-disk drive, in this case. Mavicas once accounted for 40 percent of U.S. digital camera sales.

A lesser-known innovator in digital imaging history, Sound Vision was founded by former Leaf employees in 1995 and created the first CMOS-based consumer camera, the SVmini. The company also made an early CMOS-based studio camera in 1998, the CMOS-PRO. Curiously, because CMOS sensors first appeared mostly in low-priced cameras, they were initially seen as inferior to CCDs. Now CMOS has almost entirely supplanted CCD.

Imagine people wanting to take pictures with their phones! Kyocera did, with the Japan-only VP-200. It could store 20 stills and transmit live “video” at a rate of 2 fps. Sharp soon followed with its J-SH04, developed with inventor Philippe Kahn, whose 1997 prototype phone was the first to transmit a photo—of his baby daughter.

The first DSLR body designed from scratch by a single manufacturer, the 2.7-megapixel D1 made the digital camera a serious challenger to professional film SLRs. It dropped the price of a digital SLR by more than half (it was originally sold at just under $5,000), and offered the image quality, build, and performance required by photojournalists. It, and DSLRs from Fujifilm and Canon, also helped end the reign of Kodak in professional DSLRs.

Fujifilm called the S1 (based on the Nikon N60) a pro camera, but it was the first interchangeable-lens DSLR with a price (about $3,500) and feature set that made it accessible to serious amateur photographers. It was joined by the Canon EOS D30 (not the 30D) later in 2000, and the prosumer DSLR market was established.

The first digital SLR to offer a live LCD view, the E-10 replaced the standard SLR mirror with a beam-splitter that channeled incoming light to both the optical viewfinder and the sensor. The design allowed the image feed from the CCD to be displayed live on the LCD.

Contax’s finale in the digital camera market—for that matter, the entire camera market—the 6MP N Digital was the first full-frame DSLR to be unveiled. While capable of capturing high-quality images, it had performance flaws that led it to be outshone—and outlasted—by two full-frame pro DSLRs introduced later the same year, the Kodak DCS Pro 14n and Canon EOS-1Ds.

By integrating the optics and sensor into a single tiny module, Casio leapt forward in the ultracompact design race with the 0.4-inch-thick EX-S1 “wearable card camera.” The S1 and its MP3-playing twin, the M1, helped transform the digital camera from an exotic gadget into an everyday camera—and fashion accessory.

The sophisticated A1 was the first model to stabilize images by shifting the sensor instead of using a lens-based system—with the effect seen in its electronic viewfinder. The design obviated the need—and expense—for individual stabilized lenses, and introduced a technology later implemented in DSLRs (Pentax, Sony, et al.).

Popular Photography practically stopped the presses when this 6MP DSLR was announced on the Internet. Editors scurried to redo the cover to trumpet the first DSLR priced below $1,000 ($999.99, street, with kit lens). The Reb flew off the shelves and proved the tipping point for countless serious amateur photographers to switch from film to digital.

Pop Photo’s Camera of the Year for ’05 provided full-frame capture to serious amateur photographers and cash-strapped pros for the first time, with a price less than half of the bigger, heavier professional full-framers. It had the popular new market category all to itself until 2008, when Nikon and Sony released their D700 and Alpha 900.

The first camera with well-integrated Wi-Fi connectivity proved a flopperoo, in part because it was too far ahead of its time (where were these “Wi-Fi hotspots”?). It also had setup and input issues, and the controls were a mess, but it let you email photos, upload to a Web gallery, and print wirelessly pretty easily.

This 12-megapixel model not only represented the state of the art in pro DSLRs when it was unveiled, but it raised the bar for low-light performance with a top ISO setting of 25,600. Pop Photo Lab tests and widespread user experience bore out the D3’s claims of being able to shoot clear, colorful images by candlelight.

Now seemingly strapped to every skateboarder around, these go-anywhere cams and their rugged cases have developed a huge community of fans. Later models have been used for TV broadcasts and even movies, and spawned a zillion knockoffs. “GoPro” is now almost a generic term, like “Band-Aid.”

Sure, manufacturers like Nokia and Sony Ericsson had long been producing camera phones with better optics and more features when the iPhone launched, but Apple made camera-phone imaging the mainstream medium it is today by combining a simple camera interface, intuitive downloading and sharing tools, and, in 2008, a highly accessible platform for third-party photo apps.

Panasonic threw out the reflex mirror and pentaprism assembly, radically reduced the lensmount-to-focal-plane distance, and produced an entirely new class of camera—the interchangeable-lens compact (ILC). The first camera in the Micro Four Thirds format, it was eventually followed by ILCs from every DSLR maker.

It wasn’t the first video DSLR to hit the market (the Nikon D90 beat it by a few months), but it was the far bigger step in breaking down the barrier between still and motion. With its full HD 1920x1080p capture at 30 fps and stereo mic input, it was embraced by pro videographers, and used to shoot such TV shows as House and movies as the Iron Man series.

Putting a full-frame sensor in a compact camera proved devilishly difficult to do—at least to do well. And Sony insisted on doing it very well, designing the camera from the ground up with a sharp, fast lens, classic controls, and ergonomic body. We’re left wondering if maybe Sony set the bar too high for other manufacturers to develop full-frame compacts. But only the future will tell. . .