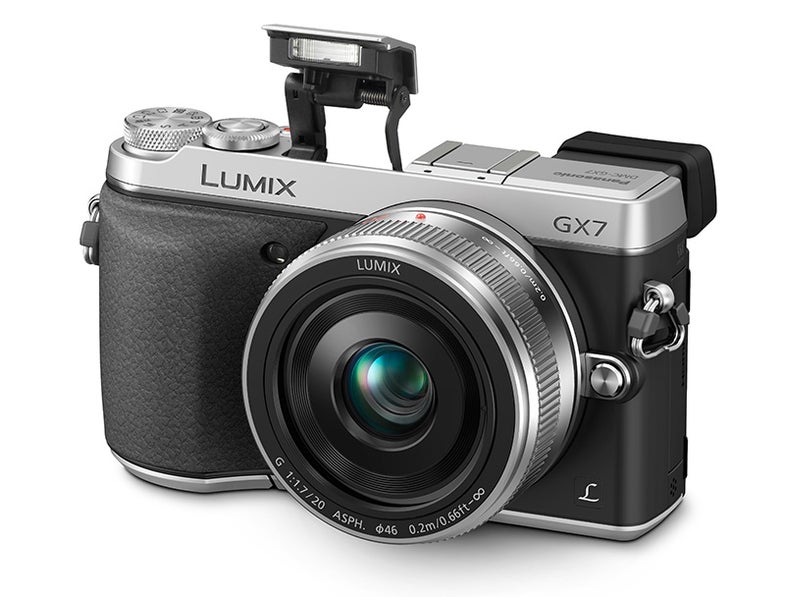 We were fans of the Panasonic GX1 for its relative abundance of photographic firepower, but the new GX7 brings a whole heap of upgrades in both the still and video arenas.

At its heart, the GX7 is built around a new 16-megapixel Digital Live MOS sensor that promises a 10% increase in color accuracy and light sensitivity over the GX1. Combined with the Venus Engine, it has a maximum ISO of 25,600.

It still uses contrast AF, which is typical for MFT cameras, but it offers a variety of scene specific shooting modes, including Low Light AF and Pin Point AF. In a first for Panasonic, though, the sensor actually shifts to provide image stabilization in all shooting situations, regardless of lens. That’s a big plus.

The GX7 has a built-in electronic viewfinder with 100% coverage and 2764K dots of resolution. It also tilts 90-degrees, so you can look down into it, rather than straight on, which is interesting. There’s an eye-sensor in the LVF that begins the focusing process as soon as you put the camera up to your face to prevent missed shots.

From a video perspective, the GX7 is capable of 1080 video at 60p, which is great for fast action. It has full-time AF and AF tracking in video mode as well, though it will be totally reliant on contrast detection AF.

The body is designed for easy handling with a pair of dials to help you use the camera without taking it away from your eye. Plus, it has built-in Wifi so it can interact with mobile apps on phones and tablets. On paper, the camera has a lot going for it, so we’re eager to get our hands on it and see how it compares to the rest of the higher-end ILCs like the GH3 and the Olympus OMD-EM5 and the E-P5.

In addition to the new camera body, Panasonic has also announced a 42.5mm Leica DG Nocticron F/1.2 lens, which is the fastest lens in the MFT system. The field of view is equivalent to that of an 85mm lens on a full-frame sensor, so it is aimed very clearly at portrait photographers. There isn’t much in the way of pricing or availability, but it’s definitely not going to be cheap. It might, however, be really, really good. Only time will tell that, though.

Dressed in magnesium alloy full diecast frame in black and silver the new LUMIX GX7 allows photographers to change their viewing perspective with a newly integrated 90-degree tiltable LVF. The new LVF features 2764K-dot high resolution and 100% color reproduction based on a Field Sequential Color Accuracy method**. This 16:9 Wide Screen LVF boasts approx.1.39x / 0.7x (35mm camera equiv.) magnification and 100% field of view. The tiltable LVF offers extraordinary angle of view with unique shooting style – looking down into the viewfinder to level the camera straight on the subject. It comes with an Eye Sensor that automatically turns ON/OFF according to the photographer’s action. The Eye Sensor AF (Auto Focus) automatically begins to focus when a user looks into the LVF, so no shooting opportunity is missed. An Eye Cup, DMW-EC1GU, made of elastic material is sold separately to enhance comfort in viewing either with the naked eye or glasses.

A new in-body Image Stabilizer is nearly as effective as the MEGA O.I.S. found in Panasonic’s conventional DSLM lenses, which makes it easier to take clear photos with mounted non-stabilized and classic lenses. The LUMIX GX7 is also compatible with Focus Peaking for more precise control of focusing. In Silent Mode, the camera switches the shutter from mechanical to electronic and turns all sound (AF operation) off while suppressing emission of AF assist lamp and flash with just a single setting for special shooting occasions. Furthermore, the LUMIX GX7 allows photographers to use a max. 1/8000 shutter speed for more impressive expression with high speed lens options.

The Contrast AF System of the LUMIX GX7 excels in both speed and accuracy by exchanging digital signals between the camera and the lens at max. 240 fps. A variety of extensive AF functions including Low Light AF (-4EV), Pin-point AF and One-shot AF enhances usability to comply with a wide-range of shooting situations. In Pinpoint AF, picture-in-picture display is available and the magnification ratio of in-frame picture is selectable from 3x to 6x. The One Shot AF function can be allocated to the AF/AE Lock Button (AF/MF Switch Lever) for more flexible control over focusing.

At the same time, Panasonic designed ease of operation into the LUMIX GX7. Two separate dials on front and back offer direct control over aperture, shutter speed or exposure, which achieves smooth manual shooting. The Live View function is also digitally advanced, making it possible to adjust highlight / shadow separately with the front/rear dial. Three patterns of settings can be customized in addition to three patterns of presets. In addition, the Fn (Function) tab is newly integrated into the menu, which means a total of nine functions can be assigned (five in tab and four with the button).

The LUMIX GX7 integrates Wi-Fi® connectivity (IEEE 802.11 b/g/n) with NFC (Near Field Communication) technology to offer a more flexible shooting experience and seamless instant image sharing. All of these flexible shooting, browsing, and sharing styles are made possible with the LUMIX GX7 and Panasonic’s dedicated application software and the Panasonic Image App for iOS / Android smartphones/tablets.