A beautiful portrait lens that evokes the early days of photography 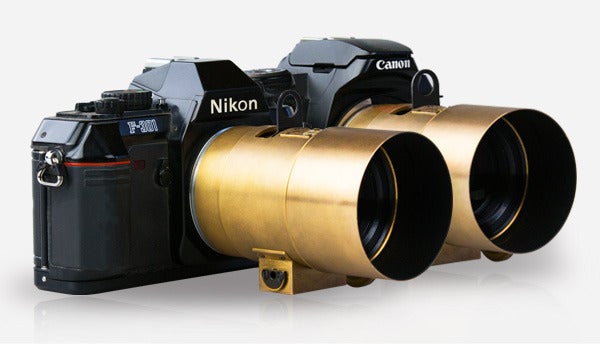 Typically, the lenses we write about on this site are on the cutting edge of photo technology, using things like high-tech coatings and complex image stabilization systems. As you know, however, that’s not Lomography’s bag. They just launched a Kickstarter to bring back the Petzval lens, optics that harken back to the early days of photography.

The Lomography Petzval is an 85mm F/2.2 lens designed after the original, which was much bigger since it was designed for large format photography. It was first introduced in 1840 and became extremely popular for years after thanks to its speed and aesthetic. The new version uses a brass body, just like the original, and Russian optics. The aperture works on a drop-in systems, so once you pick your F-number, you actually have to drop in a little card with a hole in it to determine the aperture. Old school.

Optically, the Petzval is very interesting. The field of focus is actually curved rather than flat like it is in modern lenses, which means the center of the frame will be sharp, but that sharpness will fall off as you approach the sides of the frame. This also gives it a really distinct circular bokeh, which looks really impressive, especially when you’re shooting wide open.

The project is currently raising funds through a Kickstarter, but it’s off to a tremendous start, so if you want one for the lowest $300 level, you should probably put in your order ASAP. If you’re willing to shell out more money for your lens, they have other options, which get you earlier serial numbers, and the highest levels even get you a guided trip around Vienna to take pictures with your Petzval lens. It’s available in Canon and Nikon mounts.

I love that Lomography is going this direction for their new lens, creating something that’s both really cool and could be totally usable. We’re hoping to get our hands on a preproduction version in the next few weeks, but the final versions (assuming the Kickstarter succeeds) will start shipping in February of next year. They’ve had solid results with Kickstarter in the past and this seems like a great idea, so it should have no problem getting funded.