Panasonic's mid-level ILC gets a refresh 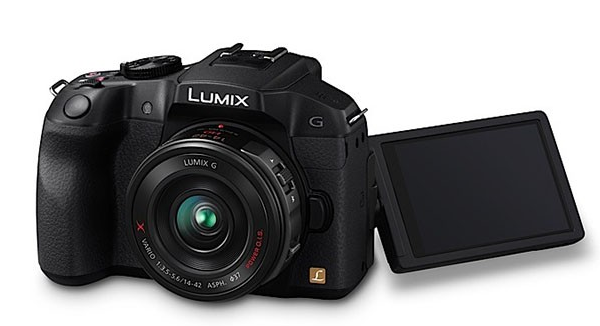 Panasonic has updated their GF and GH Micro Four Thirds camera lines fairly recently, so it only stands to reason that the G-series would be next in line. The new G6 isn’t a monumental update, but it does bring increased photographic firepower as well as some nifty wireless connectivity options.

It’s built around a new 16-megapixel Live MOS sensor, which is coupled with their Venus image processing engine and can be pushed all the way to ISO 25,600, which is quickly becoming a standard option, even on interchangeable-lens compacts like this one. New noise reduction techniques promises improved low-light performance, which we’re eager to check out in our lab.

As is common with cameras of this type, AF is handled by a contrast-based system, which is available for constant focus in both still and video mode. The camera and lens exchange data 240 times per second for quicker operation. You can get 5 fps with AF tracking turned on, or crank it up to 7 fps without. If you use the electronic shutter, you can go as high as 40 fps.

It has a 1,440,000 pixel electronic OLED viewfinder, as well as a beefier 3-inch articulating LCD screen with a total resolution of just over 1,000,000 pixels.

Video has always been a crucial aspect of the G-series cameras and there have been some upgrades made on that front as well. The G6 does 1080p video at 60 fps. You can also record MP4 video at 28 Mbps, which is pretty respectable for a mid-level ILC like this one.

The G6 has built-in WiFi, which allows it to be controlled via app and wirelessly transfer images, but it also has the up-and-comping NFC technology baked in. Near Field Communication basically establishes a connection with another device simply by touching them together. It’s something we’re seeing more and more in mobile phones and other accessories like portable speakers.